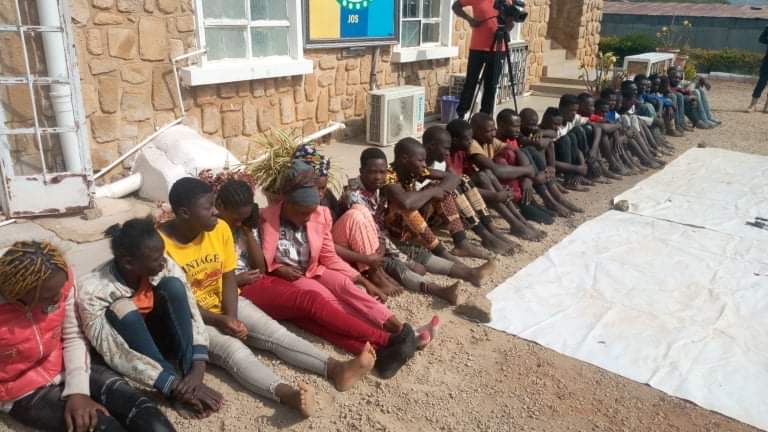 In its bid to tackle the rising cultism and other criminal activities in Plateau State, the Special Taskforce codenamed Operation Safe Haven arrested 27 Criminal Elements (21 Males and 6 Females) in its night raid on criminal/cultists’ hideouts and dens in Jos Metropolis.

3 Pistols, knives, cutlass and hard substances were recovered from them. They were arrested from Peoples and Triple Hotels in Apata Area, Westside, Rukuba Road, Jenta Adamu and Jenta Mangoro Area.

The Security Outfit also arrested a number of drug Barons who were handed over to NDLEA for further action.

While parading the Criminal elements, Operation Safe Haven reassured law abiding Citizens in Plateau State of its total commitment to having a crime free environment during the NAFEST starting 23rd to 28th November, 2020 and the Yuletide Season.
OPSH said it shall remain resolute to its mandate of restoration and maintenance of peace in Plateau State.

The Outfit also assured the public that it will continue to get rid of kidnappers, Cultists and other criminally minded persons.

OPSH encouraged the public to continue to provide useful information on criminal to enable it carry out it duties effectively. The outfit said there is no hiding place for criminal elements in the State as they will continue to deal decisively with criminals. He urged the public to give security agencies the needed supports to make Plateau State peaceful, secured and safe.

Those arrested were involved in snatching phones, handbags as well as brutal killings.

There has been high rate of cult related killings and other criminal activities.