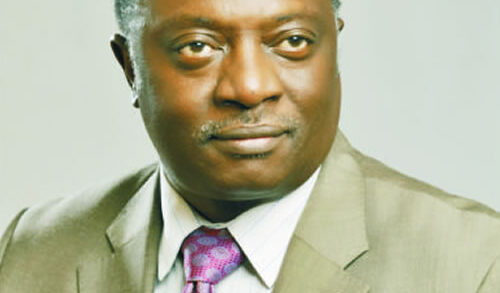 The Chief Executive Officer of the Institute of Human Virology, Nigeria also a former Commissioner of Health in Plateau State, Dr. Patrick Dakum has stated that Nigeria cannot afford to jettison zoning now in her democratic pursuits saying it is one those arrangements put in place to alley the fear of domination and to ensure equity and justice in the political system. Speaking with newsmen in Jos, Dr. Dakum who said the zoning embraced since the beginning of this dispensation has stabilized the polity to some extent and watered down complain of political domination added that the concept was put in place for every parts of the country irrespective […] 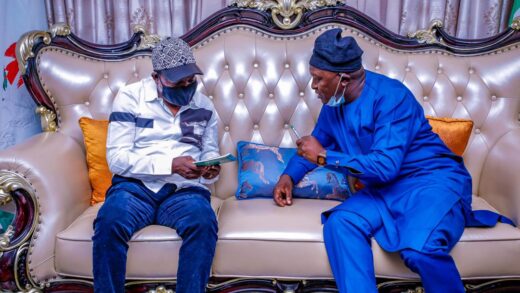 The Federal Commissioner representing Plateau State at the Federal Character Commission Mr. Steve Jings has decried the low representation of Plateau State at the Federal civil service, urging that this needs to be immediately addressed. Mr. Jings stated this when he led officials of the Commission from the State office on a courtesy visit to Governor Simon Bako Lalong at the Government House Rayfield Jos. He said there is poor representation of Plateau State in many Federal Government MDAs as some either have no Plateau indegenes or very few who are far and between. This he said is not fair to the State as it does not have a voice […] 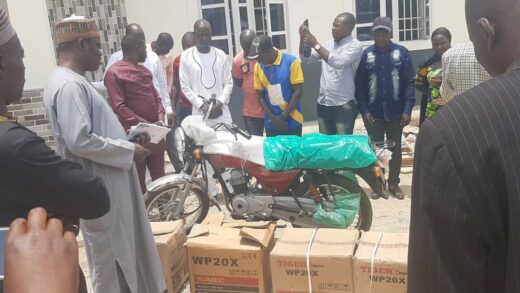 As the raining season sets in and the economic situation deteriorates, Pharm. Chun John Ezekiel popularly known as “CJ” has reached out to some persons from Kakpwis Foron District in Barkin Ladi LGA, Plateau State with economic empowerment. The Abuja based Pharmacist, businessman, co-founder of C.J & Del foundation said the generous gesture was to assist the beneficiaries have stream of income to cater for the Families and impact the society. He carried out the modest empowerment scheme to usher in the farming season at his residence in Jos the Plateau state capital on Sunday, May 2nd, 2021. Items distributed to about 40 people included a Motorcycle, 6HP water pump […] 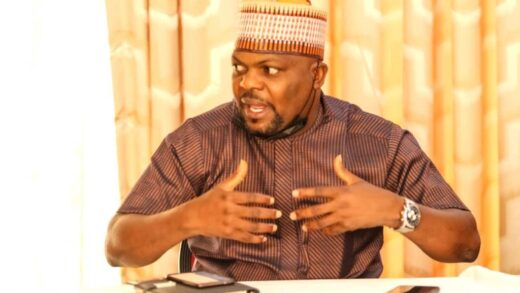 Plateau House Leader, Hon. Na’anlong Daniel has thrown encomiums on Nigeria’s workers as they celebrate this year’s Workers’ Day celebration. Hon. Na’anlong appreciated the sacrifice made by the workers towards the sustainability of Nigeria’s economy urged them not to relent but remain resilient as their good job must surely be rewarded. According to the Majority Leader, there is Dignity in Labour, while acknowledging the nobility and respect attached to labor. Hon. Na’anlong further beckoned on employers of labor to treat their employees with respect and a sense of humor. count | 22 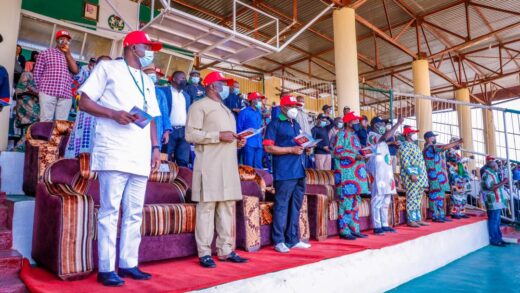 On this special day to mark the International Workers’ Day, Plateau State Governor Simon Bako Lalong joined hardworking, resourceful and patriotic workers on the Plateau at the Rwang Pam stadium to mark the day. He said he was glad that his administration has continued to foster a harmonious working relationship with Labour. He assured that his administration shall continue to do its best in meeting the expectations of the workers. Now that the Government has concluded negotiations on the 30 thousand naira minimum wage and consequential adjustments, the Governor directed the Head of Service to convene a meeting with the Joint Negotiating Council next week for the signing of the […] 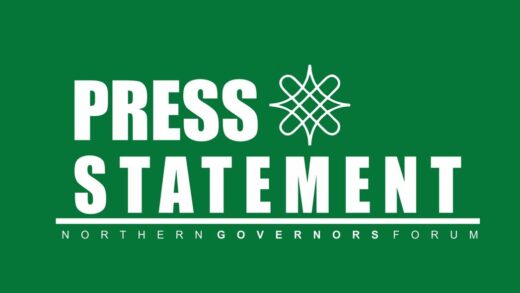 By Golok Nanmwa, Jos Northern States Governor’s Forum says it has uncovered a clandestine attempt by a shadow group to engage in a smear campaign against the Forum as well as its Chairman and Governor of Plateau State Rt. Hon. Simon Bako Lalong, by printing and circulating posters to the effect that it is supporting the Minister of Communication Technology and Digital Economy Dr. Isa Pantami over some statements he is said to have made in the past.This was contained in a statement signed by Simon Macham his director of press and public affairs and made available to newsmen in Jos. The statement reads that the uncovered plan shows that […] 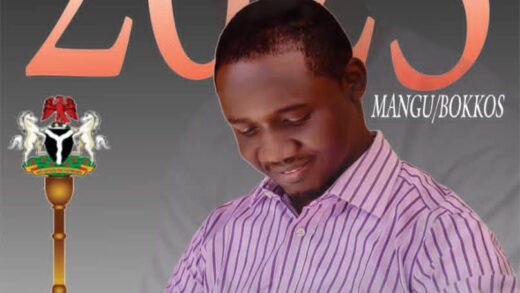 Mangu/Bokkos is the food basket of plateau state and the major local governments with unemployed youths-Barr. Mark Lere

For a position of leadership, we look out to see qualities and characteristics of a good leader in any and everyone. Barr. Panmak Mak Lere is a type of leader with so much experience and many competencies even at a tender age.We have seen in him the qualities to lead the good people of Mangu/Bokkos federal constituency at such a time as this towards good and inclusive representation, great developmental strides in all sectors and transparent and ethical use of constituency allocation to Mangu/Bokkos. Barr. Lere has the capacity to eliminate and eradicate poverty by engaging our brilliant, energetic and innovative youths through practically establishing jobs and creating employment opportunities. […] 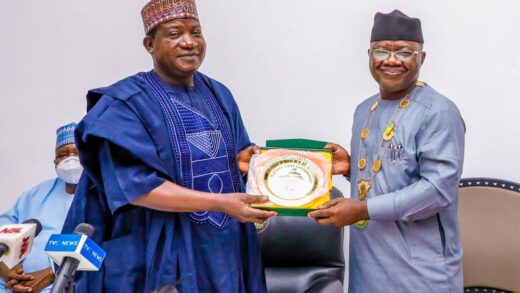 National Officers of the Nigerian Medical Association who are in Jos for their 61st Annual Scientific Conference and Delegates Meeting have visited Governor Simon Bako Lalong to interact with the Governor ahead of their conference. President of the NMA Prof. Innocent Ujah said they were at the Government House to appreciate the Governor for approving the hosting of the weeklong event which has over one thousand doctors in attendance. Ujah said the NMA is hosting the event in Plateau because of the substantial peace that has returned to State due to the efforts of the Lalong administration. According to him, there is confidence in the State as many members had […] 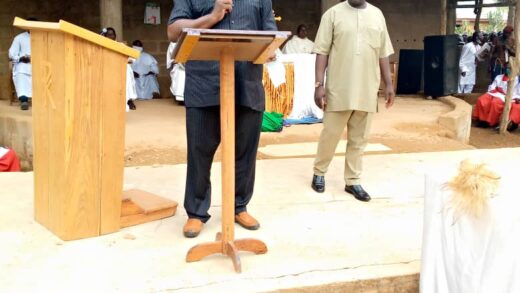 25th April, 2021 Amb Chris Giwa, a Nigerian businessman, philanthropist and politician, has undertaken to single-handedly roof a Catholic Church in Plateau State. Amb Giwa who is the founder and Chairman of Chris Giwa Foundation , made the donation during Gwom Rwey Kuru, His Royal Highness Da Patrick Mandung 35th anniversary on the throne and fundraising to complete St Dennis Catholic Church Dakan, Kuru on Sunday, 25th April, 2021. Speaking during the programme, Amb Giwa stated that the Gwom Rwey Kuru, His Royal Highness Da Patrick Mandung is a father who has sacrificed a lot for the progress, unity, and development of Kuru District and Jos South Local Government […] 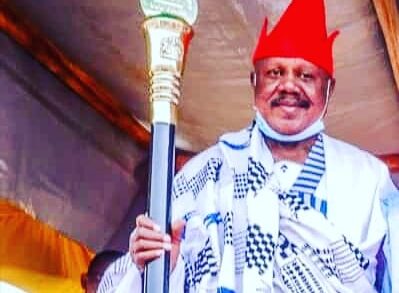 The leader and Mentor of the DVD Movement in Plateau State, Nde Victor David Dimka fsi has expressed happiness with the recent selection and subsequent handing over of staff of office to the new Long Kwo of Kwo Chiefdom in Quan Pan LGA, Miskoom Fidelis Longtoe Attahiru 1. He said, the emergence of the retired Military Officer as the 27th Long Kwo on March 18th, 2021 was a cheering news to him having known him for decades. “Grounded in several military trainings with specialisation in finance management, I am confident that the new Long Kwo will ensure unity and peaceful coexistence among his subjects”, he added. According to Nde Victor […]