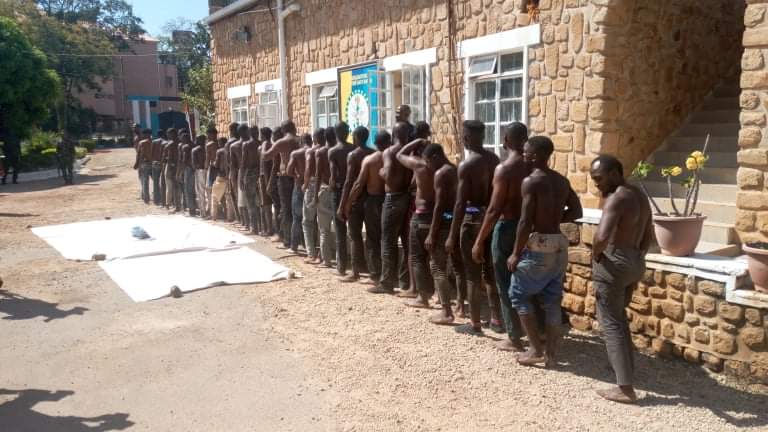 In its commitment to rid Plateau State of cultists, armed robbers, kidnappers and restore peace in the State, the Operation Safe Haven today paraded 33 Suspects in Jos Metropolis after raiding their hideouts. They suspects were arrested from Terminus Market, Rwang Pam Street, Rochas Building and Angwan Rukuba all in Jos North LGA.

In the same light, the troops engaged a gang of armed Robbers along Angul-D to Maraban Jama’a Road in Jos South LGA. One of the armed robber was neutralized in the exchange while others fled with bullet wounds. A locally made pistol and ammunitions were also recovered from the armed robbers.

One of those arrested confessed that he was a Member of a famous cult group but unable to clean his body tattoos.

The Suspects were caught with 5 Guns, Knifes, small dagger, Hard Drugs and other dangerous weapons used to terrorize the public.
There has been high rate of snatching of bags, phones, kidnapping and other forms of criminality.

The Operation Safe Haven has reassured the general public of its commitment to work towards ensuring a better, peaceful, safe and secured Plateau State especially during the yuletide season.

The Security Outfit urged the public to furnish it with timely information that will assist its men in getting rid of criminals in the State.

The Unit said it has zero tolerance for crime and will continue to do its best to fight criminality in the State. It admonished the youths to desist from crime and live purposeful life as they will not spare anyone involved in crime.

OPSH also rearrested a notorious armed robber Usaini Mohammed from Barkin Ladi LGA with bullet wound who confessed to be involved in robbery along Jos Saminaka Road and Mangu Road. The Outfit said they will ensure he is treated of his wounds before he is handed over for proper prosecution.

It will be recalled that Operation Safe Haven arrested and paraded 27 Cultists, Armed Robbers and others last week as it continue to clampdown on the hideouts of criminal elements.