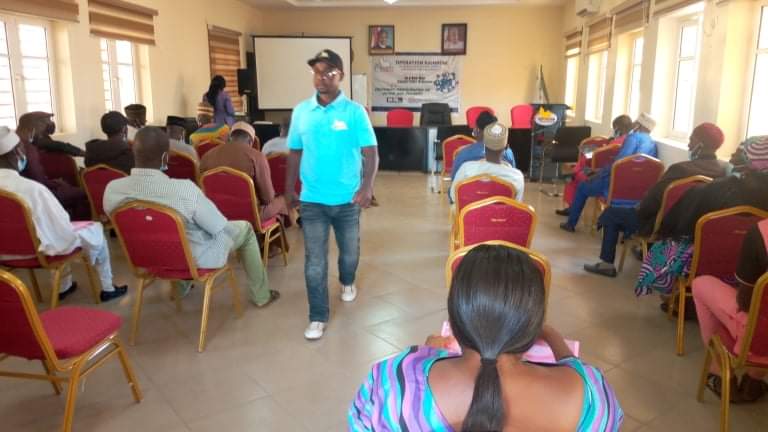 In fulfillment of its mandate of strengthening the security network in the State for sustainable peace, security and economic development, the Plateau State Security Outfit “Operation Rainbow” has organized a parley for representatives from some conflict flashpoint areas in Jos North LGA.

The participants were drawn from Farin Gada, Laranto and Kwanan Shagari all in Jos North LGA.

Plateau State Permanent Secretary of Cabinet and Special Service, Mr. Cornelius D. Shiobial expressed satisfaction with the turnout and disclosed that the essence of the meeting is to allow Communities ventilate their grievances in a more diplomatic manner for practical solutions for lasting peace in the State.
He hinted the participants that the interaction which started few months ago has helped in promoting peaceful coexistence among communities. He charged participants to provide suggestions that will engender greater peace for development to be achieved.

Coordinator Operation Rainbow, AIG Bashir Makama Dabup (Rtr) in his remark underscored the place of tolerance and understanding in the propagation of peaceful coexistence. He expressed satisfaction that the Security Outfit has provided the platform to bring communities together to air their grievances and suggest better ways to address same. He charged the participants to promote peace coexistence in their various communities. He posited that there is no alternative to peace and said there is need for tolerance among the people. He said community leaders, parents and the elites have critical roles to play in peace building.
He said politics should be a uniting factor not a divisive agent. He said lasting peace is possible and achievable if the people agree. He said insecurity has eroded economic value of the State hence the need for the people to look for better and diplomatic ways to resolve their grievances. He urged participants to step down what they will learn from the session.

CSP Victor Elias, the DPO Angwan Rogo made paper presentation on “Tolerance as a tool to managing Conflict in the Community”. He charged participants not to allow themselves to be used as tools for violence rather they should be agents of peace.

In her presentation, Haj. Fati Aliyu of the Yobe State University harped on the need for the people to desist from substance abuse which she said is a tool to violence.

Mr. Manasseh Ujim who made presentation on “the role of parents and community leaders in the peace process urged parents to take their responsibilities to their children seriously.

Director of Administration Operation Rainbow, Mr. Keziah Dung said the security outfit is doing a lot in terms of security and peace building efforts.
She said the Security Outpost and Surveillance Tower are designed to detect, prevent and minimize crime within the Dutse Uku and other parts of the City Capital by providing a grassroots-based intelligence gathering system to assist security agencies in responding effectively to distress calls within the Jos metropolis.

Participants lauded the Security Outfit for the initiative and said it should be sustained. They promised to put what they learnt to practice and step it down to the House and Community level for it to yield the desired result.