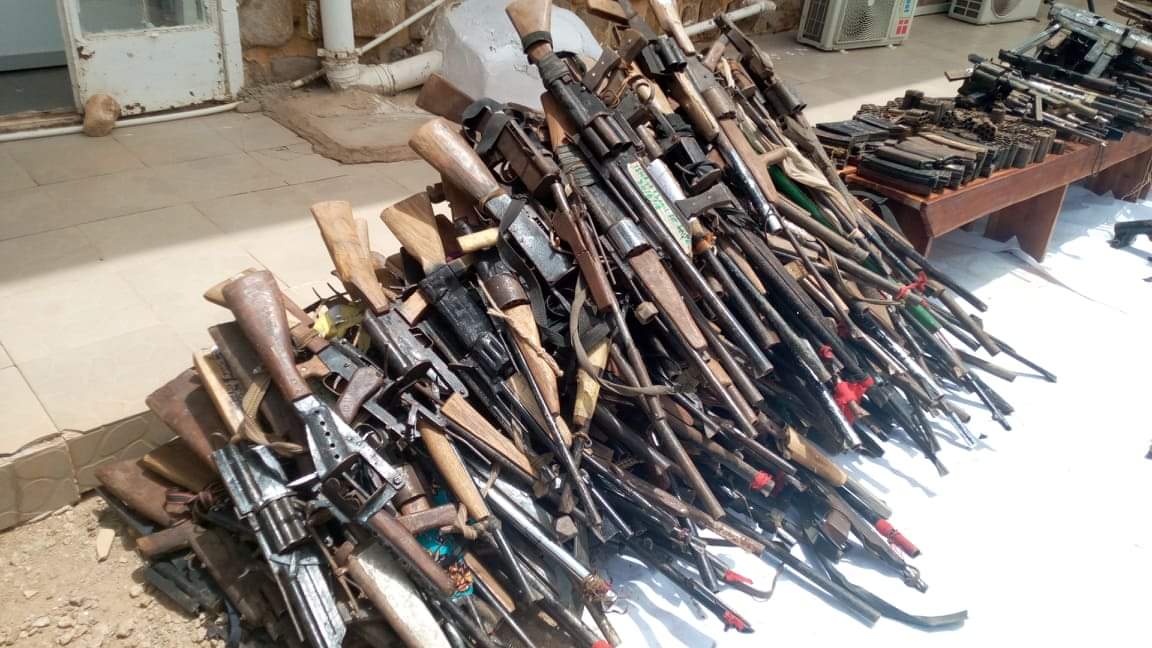 While handing over the weapons to the officials of the North Central Office of the National Centre for the Control of Small Arms and Light Weapons at the Headquarters of the Security Office, Maj. Gen. Ibrahim Ali the Commander Operation Safe Haven who doubles as the General Officer Commanding 3-Armoured Division of the Nigerian Army disclosed that the security outfit has continued to record tremendous successes in stemming the tide of criminal attacks on communities and individuals in its area of operation.
He said the leadership and troops have been deploying both kinetic and nom-kinetic approaches at community, local government as well as State levels to ensure the mandate of setting up the operation is attained with better results in the area of restoration of peace.
He said the outfit has carried out series of community engagements, sensitization programmes and civil-military cooperation to engage relevant civil society in a non-kinetic approach to resolving the lingering security challenges in its area of operation.
He hinted that many bandits were neutralized, weapons recovered and those culpable of fanning the embers of crisis prosecuted through the kinetic approach across its area of operation.

He said the outfit will continue to work assiduously to rid its area of operation of small arms and light weapons which in turn he said will translate to a more peaceful, safer and secured society.
He went further to state that the raid operations on criminal hideouts, rescue operations, cordon and search, stop and search as well as patrols led to the huge recovery of illegal weapons, drugs and stolen vehicles used by the criminal elements to carry out their inhuman activities.
He dispelled the rumor trending on the social media that he has been compromising and taking side with a particular ethnic group in the conflict between farmers and herders in Plateau State saying it is false as he has sworn his allegiance to defend the Country, protect lives and property of all citizens devoid of any ethnic, religious and pecuniary sentiments.
He said he will always remain fair, just and treat all equally urging the general public to discountenance the campaign of calumny against his person orchestrated by some mischievous elements and resentful entities to cause unnecessary distractions towards the huge successes recorded by the Operation Safe Haven.
He commended the troops of the Security Outfit for displaying resilience which has led to the huge successes recorded in curtailing criminal activities and recovery of numerous illicit weapons admonishing them to be more professional, vigilant and display utmost respect for human rights of the citizens as they discharge their duties of protective lives and property of the citizens.
He lauded the Press and Media Houses for assisting the Outfit in the area of dissemination of relevant information which he said aid the successes achieved.

Receiving the Weapons on behalf of the National Coordinator, Maj. Gen. Hamza Bature (Rtd) lauded the outfit for the successes recorded so far and urged them to do more to ensure that the mandate of the centre which is to have an illicit arm-free Society is achieved.
He said there is need to do more in the area of mopping up small arms and light weapons as the 2023 General Elections approaches.
He urged the public to accord the needed support to the Federal Government in its effort to eradicate illicit arms in circulation and enhance an illicit arms-free society.