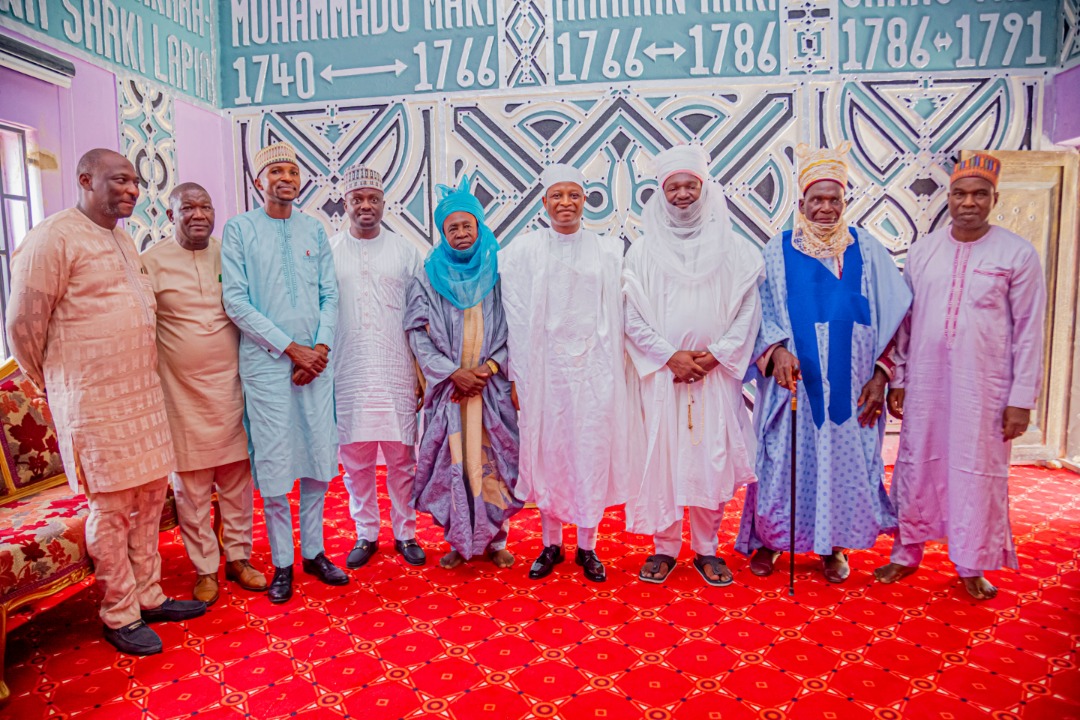 The Executive Secretary, Nigerian Christian Pilgrim Commission, Rev Dr Yakubu Pam has condoled the Emir of Kanam in Plateau state , Alhaji Muazu Muhammadu over the recent killings in some communities in Kanam Local Government Area.
The NCPC boss who paid a condolence visit to the Emir with his delegation in his palace at Dengi, headquarters of Kanam Local Government Council on 23rd April, 2022 said he was pained by the unprovoked killings of the good people of Kanam by those he called the ” evil men”.

He described Kanam as a very peaceful place blessed with hardworking and peace loving people.
Rev Pam affirmed that the recent attack and killings in Kanam is a trying time for the Emir and his subjects. He urged him to be strong and undaunted because trials are meant to strengthen us as a people and move us to the next level.
In the words of the NCPC helmsman,” I am here to commiserate with the people of Kanam and the entire people of the state”.
He called on the Federal Government and the Plateau state Government to come to the aid of the Kanam people, stating that the Kanam people need help at this trying time.
He explained that the insecurity problem in the area cannot be handled by the Emir alone. According to him,”you alone cannot do it, you need the intervention of both the Federal and Plateau state government”, he said.

Speaking, the Emir of Kanam ,His Royal Highness, Alhaji Muazu Muhammadu said the visit of the Executive Secretary had given them so much hope and encouragement.
He reaffirmed that as a spiritual father that he was confident that his visit and his prayers would bring comfort to his people.
He further disclosed that the communities where the killings took place have a large concentration of abundant natural resources with high mining activities which attracted the unknown assailants . Aside this, he intimated that the communities are border towns and share boundaries with Bauchi.
To this end, His Royal Highness called on the Plateau State government to harness the mineral potentials in the area which would help in empowering the youth and engage them meaningfully.

In a related development, the NCPC boss also paid a condolence visit to the Executive Chairman of Kanam Local Government Council, Hon Dayyabu Garga at the Local Government Secretariat.
He again commiserated with the leadership of the Local Council and the good people of Kanam over the unfortunate incident.

Speaking on behalf of the Executive Chairman, the Secretary of the Local Government, Hon.Hashimu Umar thanked the NCPC boss for his humanitarian gestures all over the state and the country.
He further thanked the him for his good heart and his love for the people of Kanam and Plateau state in general.

It would be recalled that few weeks back some communities in Kanam and Wase were attacked by some unknown gun men and over 80 people were killed and houses burnt down.