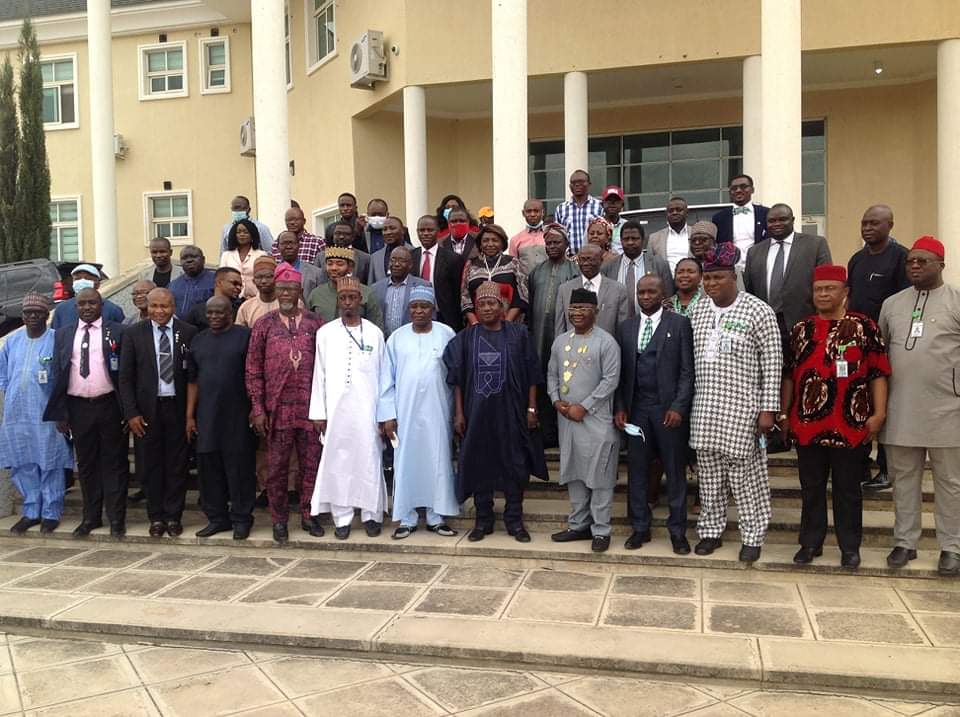 The Nigerian Medical Association (NMA) has made case for greater attention to be accorded the health sector in the Country in order to actualize a healthier and productive Nation by meeting the health needs of the populace.

This appeal was made by the President of NMA, Prof. Innocent Achanya Ujah FNMA, mni when he led a powerful delegation of NMA on a courtesy visit to the management of the Jos University Teaching Hospital (JUTH), Plateau State.

“Financial poverty should not be a barrier to accessing healthcare services” he posited.

He disclosed that the Delegation is in the State for the first historic 61st Annual General Conference/Delegate Meeting in Jos, the Plateau State Capital.

Prof. Ujah said Nigerians should be given opportunities to enjoy healthcare services irrespective of their social and economic status.

He lauded the management of the Tertiary Health Institution for the services being rendered to the citizens and meeting the health challenges of the populace.
He harped on the need to fund the health sector in order to attain greater height in healthcare service delivery.

He hinted that greater attention should be accorded the core mandate of the hospital which are Clinical services, training and research.
He frowned at the neglect of the research which is a critical component. He harped that research should be given its prominence and improved upon if breakthroughs and successes are to be recorded.

He enumerated some of the challenges being faced by Doctors in Nigeria which require urgent attention. He said there is need for planning and commitment to addressing the welfare needs of medical Practitioners especially the Resident Doctors who are contributing immensely to improved health of the people.
He said the Nation is blessed with human resources who are sought after globally but frowned at the rate of brain drain as well as the utilization of foreign medical facilities by the citizens which is benefiting other Countries but adversely affecting the Nation.

He charged staff to be more committed, improve on interpersonal relationship and patient care.

The Chief Medical Director of JUTH, Prof. Edmund B. Banwat who was flanked by other top management officers appreciated the NMA delegation for the visit and said the Institution is ready to partner with NMA for exceptional service delivery that will help in generating ideas for policy making and improvement in the health sector.
He said the country has enough to achieve greater delivery healthcare to all Nigerians.
He assured his organization’s commitment to deliver quality healthcare services to those in need.

He said the The conference should be impactful and come up with ideas that will be beneficial to the Nation.

The delegation was also at the New Government House Little Rayfield on a courtesy visit to the Executive Governor of Plateau State, Rt. Hon. Simon Lalong.

He said the event is historic being the first ever hosted by the State. He said over 1,000 Doctors will be in the State for the conference and said that will have significant economic value to the State. The delegation said the Governor has demonstrated in practical terms his love for NMA.

They lauded the Governor for his support for the conference and previous support to the building project of NMA.

NMA President, Prof. Ujah said every Nigerian should have access to healthcare services whenever the need arises and to ensure that people are not hindered from accessing healthcare services on account of social and economic factors.
He commended the peace building effort of the Governor.
He called for attention to the insecurity bedevilling the Nation.

The Health sector is capital intensive, hence the need to invest considerably well to enhance the health status of the Nation.

Governor Simon Lalong welcomed the delegation and delegates to the State and promised to be supportive to the Association in its commitment to achieving a more healthier population and give greater attention to the health sector.
Gov. Lalong called on Health Experts to invest in the State through the establishment of Health Facilities to attract health tourism to the State considering the huge opportunities and potentials the State possesses.

The 2021 61st NMA National General Conference/Delegate Meeting which will run to Sunday 2nd May, 2021 with opening ceremony on Thursday 29th April, 2021 at Crispan Hotel Jos has as its theme “Nigeria and the global health agenda 2030”