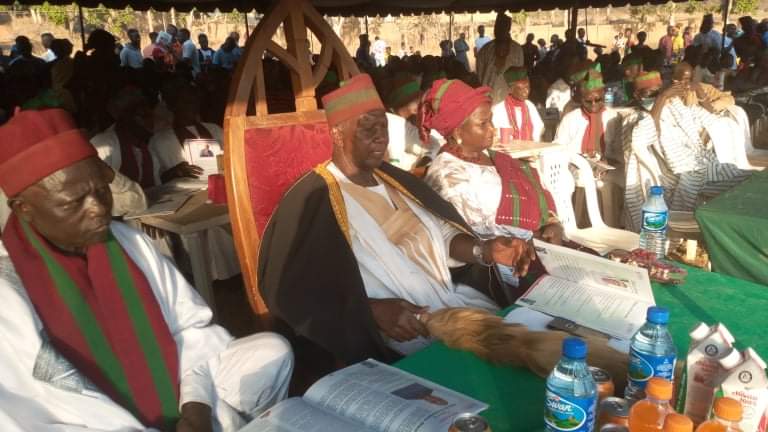 The mood of the people all over the hamlets that made up Kuru District, Jos South LGA in Plateau State was that of intense joy and fulfillment to witness yet another auspicious New Year Celebration christened “Jogo Shey Pas”

The feeling of the people; children, youths, adults and the elderly was visibly that of great excitement as none was left out as the atmosphere was right that of celebration.

From the mood of the people, the celebration was one of the best they have witnessed in most recent times.
Illustrious Sons and Daughters of Kuru District thronged in their thousands to Dakan Village, Venue of the event.
It was indeed a day of fun and avenue to meet with people who some have not seen for long as well as solidify friendships in certain quarters. Lovebirds were not left out as they were seen walking around catching funs and Bachelors were seen making advances to Beautiful Ladies around.

Gwon Rwey (District Head) of Kuru, His Royal Highness Da Patrick Mandung was flanked by his Beautiful Wife, Gwom Kush Da Pius Jugu, Da Ali Gyang the Acting Gwom Hwak, Da Davou Damandyeng the Chairman of Ward Heads in Kuru and others.
The event started with the Royal Walk by the Gwom Rwey who was adorned in Royal attires and accompanied to the venue from his Palace in a grand cultural style by other Kings and his subjects depicting royalty and the rich cultural heritage of the Berom Nation.
Sons, Daughters of Kuru District as well as invited Guests made it to pay homage to the Royal Father who was adorably seated.

Chairman of the occasion, Engr. Jang Tanko FNSE who is the President Nigeria Institute of Civil Engineers lauded the Central Planning Committee for putting up such a great event.

Chairman of the Planning Committee, Hon. Monday Mancha appreciated the Guests for honoring to be part of the epoch making ceremony.

The event climaxed with the award bestowed on two illustrious Sons of Kuru District; Hon. Pamson Dagyat the pioneer Statistician General of Plateau State who is presently the Deputy Director Information & Communication Technology (ICT) of the prestigious University of Jos and Amb. Chris Giwa a Business Tycoon and Philanthropist who were honored and decorated by the Gwom Rwey Kuru, His Royal Highness Da Patrick Mandung for their numerous impacts and contributions to Kuru.
The Royal Father reminded the Award Recipients that they were meticulously selected for the awards considering their contributions to the growth and development of the District.

While Hon. Pamson Dagyat received award of honour for his impact to human capital development, Amb. Chris Giwa was honored for human and infrastructural development.

Hon. Pamson Dagyat who spoke at his residence where he treated Guests to a dinner appreciated the Kuru Development Association (KUDA) and the Kuru Traditional Council for finding him worthy for the award of honour saying it will spur him to do more to impact humanity and the society.
He promised not to relent in adding value to the society.

Persons who attended the event described it as one of the kind and said they look forward to more in the future.