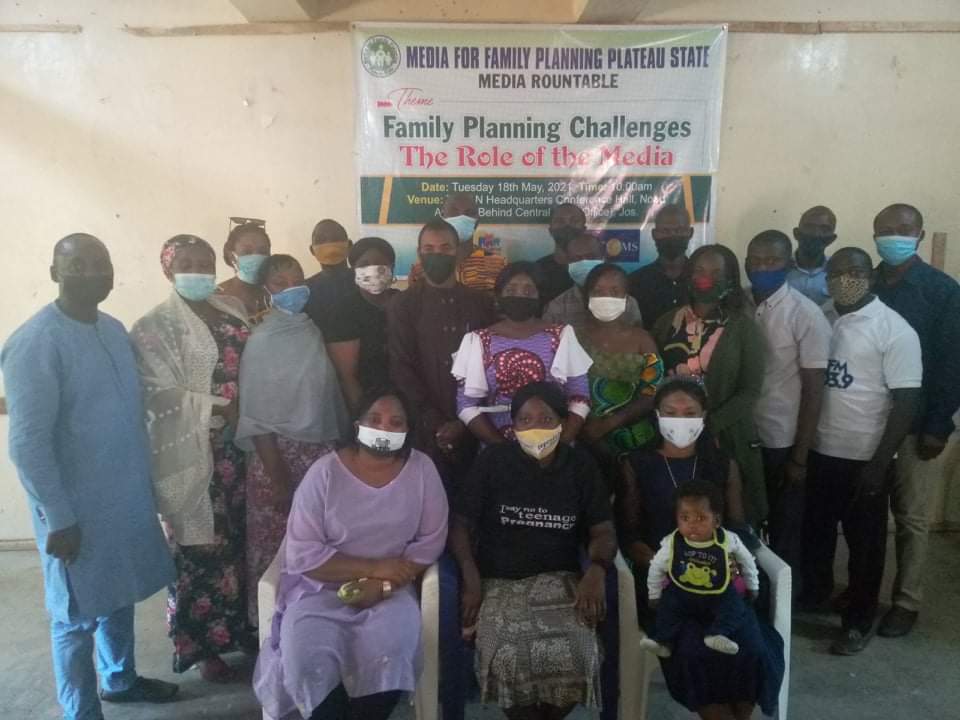 As the group, Media for Family Planning Plateau State Held its Second Media Roundtable at TEKAN Headquarters Jos on Tuesday 18th May, 2021 with the theme “Family Planning Challenges: Role of the Media in Plateau State”, Media Professionals have been charged to ensure increased advocacy and other strategic engagements if the desire to achieve quality health and quality of life through childbirth spacing is to be met.

While the Media Practitioners were commended for their cerebral roles in sensitizing the public on the significance of childbirth spacing to the health status of Mothers/Children and socio-economic wellbeing of the family as well as the society, they were reminded that there are ill-informed & uninformed spaces in some cases that require their urgent attention.

The Media Roundtable had panelists who harped on the need for Media Professionals to be more strategic and proactive in their engagements with the public.

Speaking to the participants, the General Manager of Plateau Publishing Company Mr. Boniface Gwotbit represented by Mr. Katdapba Gobum who was one of the Discussants underscored the fact that people in the society are not comfortable with the word “Childbirth spacing” making the choice of words key. He insisted that changing reporters handling or assigned to certain beats may end up killing initiatives and morale of the reporters noting that reporters must be proficient and specialists in what they do (reporting their beat). He further pointed out that Journalists must be conversant with the terminologies used in respect to specific issues under consideration else the report will end up being unclear to the public.

The Zonal Director, News Agency of Nigeria (NAN), Jos zone, Abdullahi Yusuf speaking through Martha Asumata Agas affirmed that building terminologies is an integral part of the media advocacy and that the choice of words can’t be overemphasized since we are living in a multi-cultural and religious Nation.

A Senior Reporter with a New Media Outfit, Viewpoint Nigeria and Public Relations Officer of Media for Family Planning, Mr. Friday Bako who spoke passionately on Childbirth spacing said since the society depend on the media for information it behoves on the media play it role as the watchdog. The media being an intermediary between the health experts and the public should report the extent of challenges, progress on health facilities, translate and simplify the terminologies used in the Childbirth spacing procedures. He added that the media should target the Teenagers in the rural areas with a view to timely educate and change their mindsets concerning childbirth spacing. According to him budget line, human capital development, structures are key to sustainability of childbirth spacing as well as yielding the desired results which in turn counter myths and misconceptions.

Suleiman Hassan who represented the General Manager Unity FM /TV also pointed out that religion and culture have being sources of challenges towards child birth spacing in some communities insisting that culture is dynamic and there’s need for media to educate people in order to dispel myths and misconception that “childbirth spacing is against a certain religion and therefore, it’s a subtle way to control population”; instead its economical and societal benefits are all encompassing. He further stated that engaging religious leaders is necessary.

He added that the objective of the round table is to have an in-depth and robust deliberations on the role of the media towards addressing the challenges of family planning in order to put issues in the right perspective.

In his remarks, Dr. Philemon Mamza Yohanna, the State Coordinator of The Challenge Initiatives (TCI) applauded the group for its passion for reportage of Childbirth spacing urging them to come up with initiatives that will provoke a positive mindset change in the society.