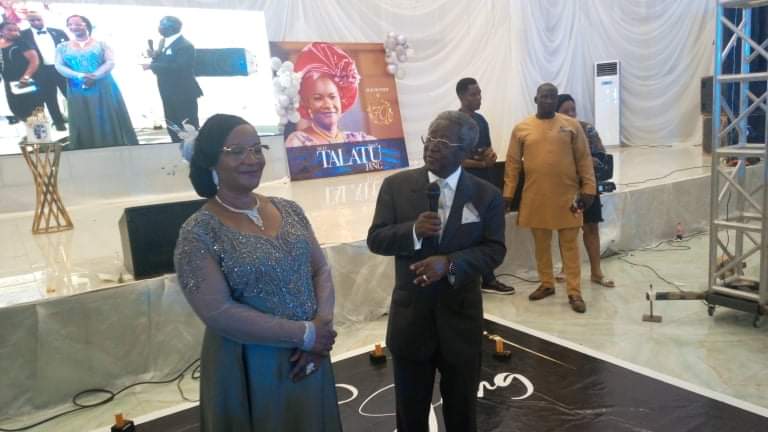 It was a day of merriment, glamour, celebration of God’s faithfulness, love and fifty Years of togetherness as the Family of the immediate past Governor of Plateau State, His Excellency Da Sen. Jonah David Jang, CON brought together Family Members, Friends, loved ones and well-wishers together at the new Crispan Suites and Event Centre Jos, the Plateau State Capital to celebrate their 50th Wedding Anniversary as well as the 70th Birthday of the former First Lady of the State and the Founder of Women in Agriculture and Youth Empowerment (WAYE), Ngo Talatu Jang in grand style.

The event was well attended by top Political figures within and outside the State, captains of industries, former top Government Functionaries who served during the tenure of Sen. Jang, heads of security agencies in the State as the Crispan Hall was full to the brim that many people had to stay outside.

In his remarks, His Excellency Sen. Jonah Jang recalled with nostalgia when he met his heartthrob and instantly proposed to her. According to him “No one will meet such a beautiful Woman and not want to marry her, so I didn’t approach her to date her but to marry her.

“You can see how beautiful she still looks, she has been a wonderful Wife, a great Mother to many and I am very proud of her” he stated.

“Dara Jang” as he is fondly called appreciated God for being with his family all through their matrimonial journey and for how God has blessed his family.

Ngo Talatu Jang was expressed gratitude to God for His mercy and for making it possible for her to celebrate her 70th birthday and 50th Wedding Anniversary. She took time to appreciate those who attended the event.

In his remarks, Hon. Pam Jang commended his parents for the upbringing and prayed God to keep them healthier to witness better days ahead together. He appreciated those who made it to the event saying the turnout was an indication that the family is loved and appreciated by the people.

Children, Grandchildren and adopted children who were visibly around poured encomiums on the duo.

Guests were treated to sumptuous delicacies and varieties of drinks.