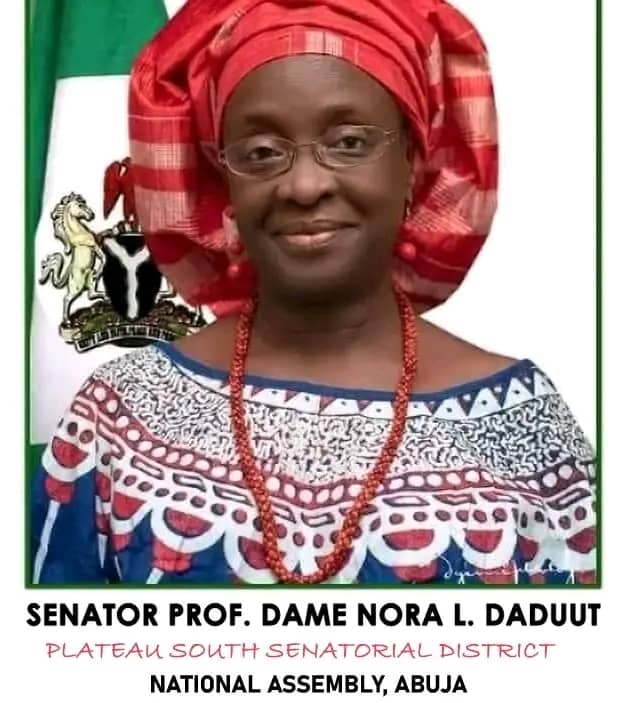 Information reaching this medium has it that the Incumbent Senator representing Plateau South Senatorial district Prof Nora Ladi Daduut is amongst Senators who submitted their resignation letter to decamp to the opposition party PDP to the Senate President some days ago our correspondent has gathered .

The Senator was elected under the platform of the All Progressives Congress APC .

It could be recalled that the Senate President, Senator Ahmad Lawan, is currently sitting over the defection letters of at least 12 All Progressives Congress senators in order to block any impeachment threat against his presidency Already the numerical strength of the APC in the Red Chamber has reduced from 64 to 62 in the upper chamber. For the Peoples Democratic…”

Already the numerical strength of the APC in the Red Chamber has reduced from 64 to 62 in the upper chamber.

For the Peoples Democratic Party, the numerical strength has risen from 39 to 41, while the New Nigeria Peoples Party has two, with Young Progressives Party and All Progressives Grand Alliance having one each.

If the defection letters of the APC 12 Senators are read on the floor, the numerical strength of the ruling party will be reduced to 50 senators, which will eventually threaten Lawan’s seat as the Senate president.

Among the senators, who the Senate president is sitting upon his defection notice is Senator Adamu Bulkachuwa, who submitted his defection letter Lawan.

The senators elected on the platform of the opposition parties had on Wednesday demanded for the impeachment of President Muhammadu Buhari over the country’s worsening security situation.

Some opposition senators were at that considering of removing the Senate president if he standing against the impeachment process of President Buhari.

Sources close to this medium said she has concluded plans to decamp to the PDP soon and might inform her supporters soon .