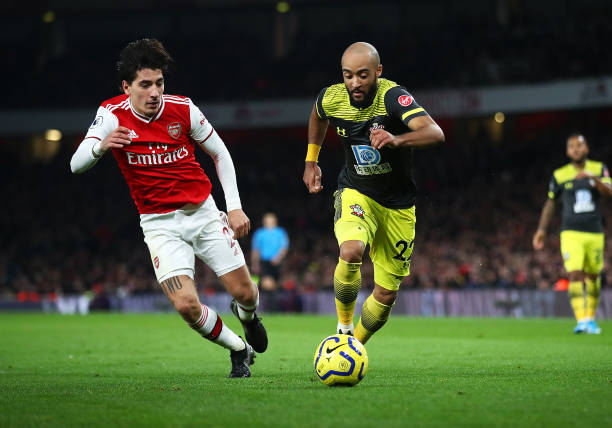 Arsenal, defending champions of the English FA Cup, have been dumped out of the competition in the fourth round following a 1-0 loss to Southampton on Saturday afternoon at the St. Mary’s stadium.
The home side dominated the game from the start and forced Bernd Leno into saves while James Ward-Prowse also hit the bar with a direct corner kick.

Ralph Hasenhuttl’s side took the lead on 24 minutes through an own goal by Gabriel Martinelli. The Brazilian defender deflected Kyle Walker-Peters’ cross into the net, handing the Saints a goal that proved to be the match-winner.

It was the first goal Arsenal had conceded in 508 minutes of FA Cup action.
Mikel Arteta’s men endured a poor first period but improved after the interval. Their only meaningful shot on goal in the half came in the 67th minute as a deflected Eddie Nketiah strike was well kept out by Fraser Foster, Southampton goalkeeper.

Nketiah also had a shot cleared off the line by Ward-Prowse as Southampton held on to claim a first-ever FA Cup win over Arsenal that qualify them into the fifth round where they will meet Wolverhampton Wanderers.