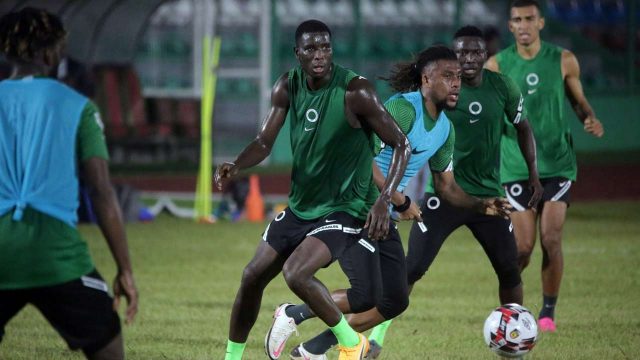 Except the Nigeria Football Federation (NFF) and Coach Gernot Rohr decide to camp the Super Eagles in Benin Republic for one week ahead of the Cameroon 2022 AFCON qualifier against the Squirrels, Nigeria may be forced to play the game without some of its regular stars based in England and South Africa. Among the players are Alex Iwobi, William Troost-Ekong, Kelechi Iheanacho, Ola Aina and goalkeeper, Daniel Akpeyi.
Going by the current NCDC rules, players coming from outside the country, especially England and South Africa, must be tested for COVID-19 and quarantined for a long period of time before being integrated to the society.

The Super Eagles will meet the Squirrels of Benin Republic on March 22 in a game they need a draw to qualify for next year’s African Cup of Nations.
Recall that the recent identification of a new variant of the coronavirus (COVID-19) in some countries has forced the country’s health officials to impose additional restrictions on people travellers entering the country. Starting December 28, authorities require passengers from the UK or South Africa to obtain and present a pre-departure permit to fly and a QR code confirming they have booked a COVID-19 test on the seventh day of their trip in Nigeria.

Additionally, all travellers from the UK or South Africa must provide a negative COVID-19 Polymerase Chain Reaction (PCR) test results from an examination taken within 96 hours prior to boarding. Upon arrival, the public health authorities will attend to passengers whose point of origin is from either the UK or South Africa separately from those individuals arriving from other destinations. Regardless of the point of origin, quarantine requirements remain in effect for all arriving travelers.

Based on this requirements put in place by the Nigerian health authorities, the CAF Confederations Cup return leg fixtures between Rivers United FC and Bloemfontein FC of South Africa, initially slated for Port Harcourt was moved to Benin Republic, a neutral venue as the South African outfit could not meet up the seven days quarantine protocols placed on the team.
However, since the NCDC has continued to stand its ground on the COVID-19 protocols on South Africa and United Kingdom passengers, the Nigeria Football Federation, Director Media, Ademola Olajire, said the NFF was monitoring situations, as the days go by to fashion out modalities that will ensure the Super Eagles successful prosecute the AFCON qualifier against Benin Republic with out any hitches.

“We can only watch events as they unfold. We are not clairvoyant. All the same, we hope for the best,” Olajire stated.

Super Eagles will be facing Lesotho in their last game of the AFCON qualifier on March 30.

Nigeria currently leads Group L table of the AFCON with eight point ahead of Benin Republic, which has seven points while Sierra Leone and Lesotho are on three and two respectively.

RINKAT OSWALD DONATE 14 BALLS TO PANYAM STUDENT ASSOCIATION FOR THEIR ANNUAL 5ASIDE COMPETITION.