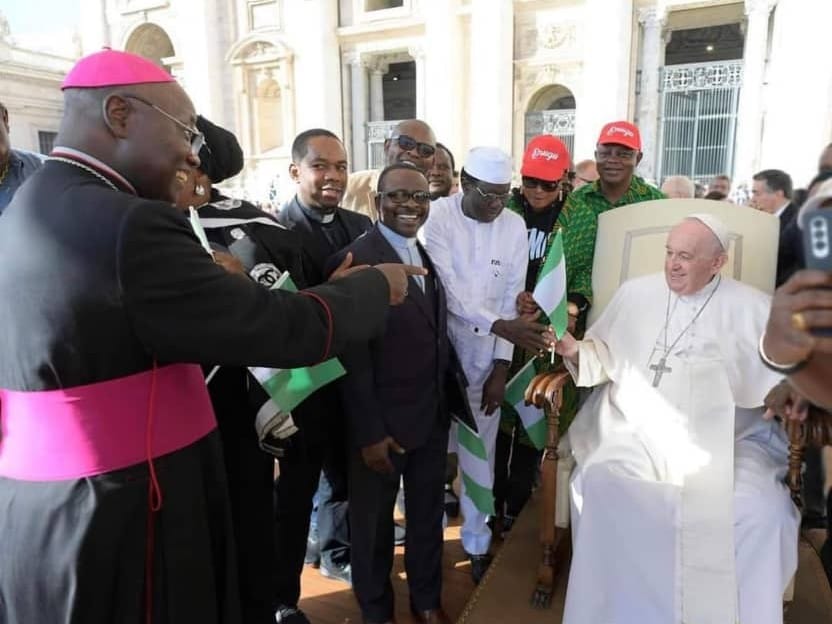 Pope Francis granted audience to the Nigerian Pilgrims during the 2022 special pilgrimage to Rome organized by the Nigerian Christian Pilgrim Commission, NCPC.

The Nigerian Pilgrims were led to the papal audience at the Vatican City by his Grace, Most Rev. Ignatius Kaigama, among other high profile personalities.

The Pontiff received the Nigerian flag from the Nigerian pilgrims and prayed for peace and progress of Nigeria.

He also prayed for those who lost their lives in the flood incident in Nigeria.

The Executive Secretary of the Nigerian Christian Pilgrim Commission Rev. Dr. Yakuba Pam described the audience with the pope as spiritually fulfilling, he Commended the good conduct of the pilgrims during the special pilgrimage to Rome in spite of the fact that there were some inadequacies, coupled with the fact the pilgrims were not able to visit Israel due to operational reasons.

However, the NCPC Boss assured the pilgrims especially the self-sponsored ones that the Commission would come up with a mechanism to accommodate them in the next pilgrimage exercise.

In the same vein, the general Secretary of the Christian Association of Nigeria, CAN, Barr. Daramola Bade also affirmed that the Papal audience was the best thing that help the pilgrims. He was specifically happy that he personally handed over the Nigerian flag to Pope Francis. His words, “I will never forget this experience in my life”. He further stated, “ I thank the NCPC for providing this veritable platform to be in the presence of his Holiness”, he said.

In his assessment of the 2022 Special Pilgrimage to Rome, the Executive Secretary of the Enugu State Christian Pilgrims Welfare Board, Barrister Nestor Ezeme spoke on the Papal visit which he said was his first time ever to personally meet with his Holiness. He said he could not contain himself for joy for such a privilege of a life time.

He said he would encourage his other colleagues in other states to see the need to embark on a Special Pilgrimage to Rome with their pilgrims considering its attendant blessings.

On the quality of hotels where the pilgrims were accommodated, he lauded the NCPC for providing descent accommodation for the pilgrims.

He particularly thanked the NCPC Boss for making sure that the special Pilgrimage to Rome was a reality in spite of all odds.

About 112 pilgrims participated in the NCPC 2022 special pilgrimage to Rome, made up of self sponsored pilgrims, Lagos and Enugu Pilgrims as well as some high profile personalities which include both the Deputy Governor of Enugu and Nasarawa State as well as some first class traditional rulers.