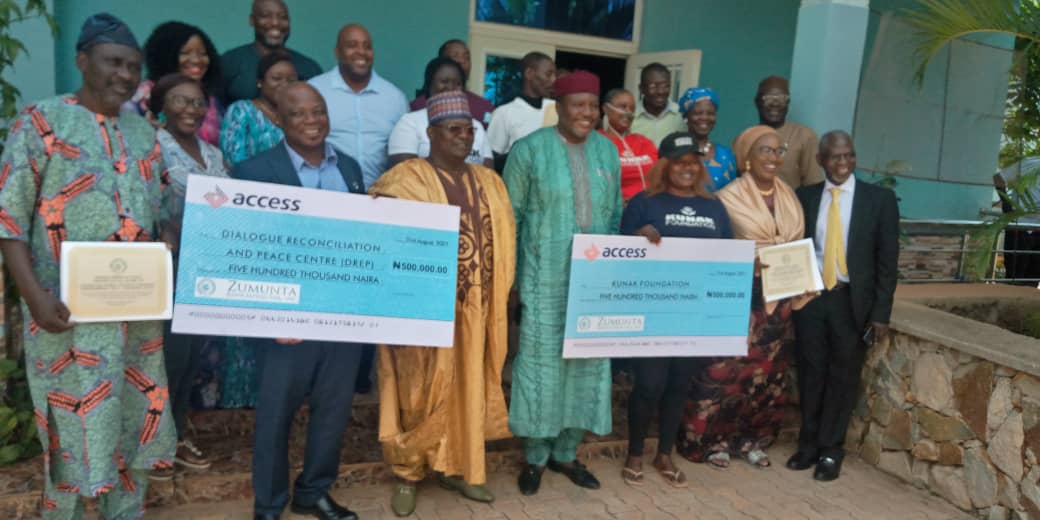 An International organization Zumunta Association USA International’ on Tuesday presented over N3.5 million naira Cheques to seven Non Governmental Organisations NGOs as funding for the upliftment of the vulnerable and children in Northern Nigeria.

National President of the body, Philip Moses who spoke during the empowerment said Zumunta is a non profit cultural community organization based in the Diaspora is spread across 12 states of the United States of America.

He disclosed that “Zumunta’s pinnacle pet project has been the scholarship programme to which we have supported our less privileged individuals attending Universities in Nigeria.”

The contributions he said has subsistence support for “tuition and fees including books, accommodation and allowances of 50,000 that has been reviewed over the years to 70,000 to meet up with the rate of inflation.

“Last year, we disbursed and paid out a total of two million, two hundred and forty thousand naira only,” he stated.

Out of the N3.5 million naira, seven states were regig with N500,000 each. The benefiting states are “Kaduna, Nasarawa, Plateau, Kogi, Kano, Borno and Sokoto States respectively.

The President narrated thus, “Zumunta scholarship programme started since in 1998 and we are pleased to note that with the assistance of the scholarship, the first set of the beneficiaries graduated in 2015 and we have graduated several number of sets of students and counting from various universities across the Nation since its inception that have benefitted from the programme.”

He said the group comprised of individuals of Northern Nigeria extractions from the 19 Northern states including the Federal capital territory, “We are determined to better the lives of citizens of Nigeria .”

He said the body with its limited resources has been involved in benevolent projects and have even reached out to people of other countries through the Red Cross ,during natural disasters such as the earthquake disasters in Haiti in 2010 and the flood disasters in the Philippines in 2018 .

“Zumunta has also embarked on some projects like renovation of primary schools in Nok, Jaba local government and the drilling of potable water borehole in Nasarawa Eggon .”

The Commissioner for Special duties and Non Governmental organization Hon Irimiya Jerry Werr , who also spoke at the occasion lauded the initiative of the organisation .

He said that the Simon Lalong led adminstration is always willing to partner with any organisation that would impact positively to the wellbeing of it’s citizens .

He called on the beneficiaries of the group to impact positively on the society .
A beneficiary from Kogi state Amina Daniya Hamzat ,who operates Support for Ebira Women and Girl Initiative expressed her gratitude for the gesture and recognition stressing that the funds given to her NGO would go a long way to lessen the barrage of problems it is confronting .

“I assure you that this fund will be judiciously utilized for very purpose for which it was disbursed ” ,she added .