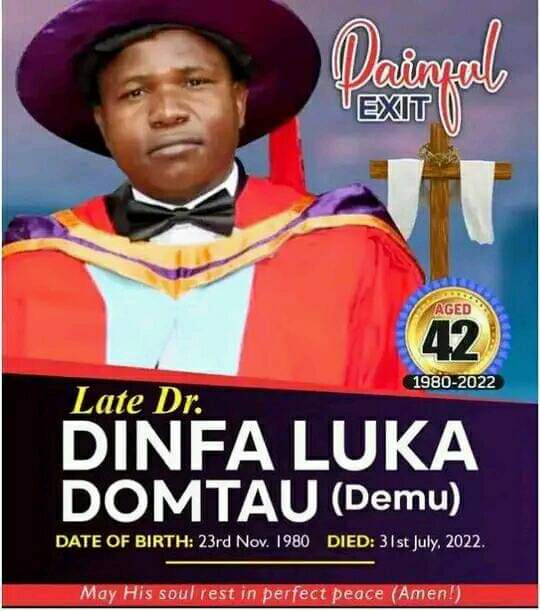 Executive Chairman,Langtang South Local Government Council,Prince Vincent Venman Bulus has described the late Dr.Dinfa Domtau as an easy going and understanding gentleman who will be greatly missed as his contributions touched lives.Speaking after a visit he embarked on along side other Chairmen to the residence of the deceased,Venman who spoke on the sidelines said his relationship with the deceased dates back so many years as such his humility stood him among his peers.He added that the late Dr.Dinfa Domtau was on the rise politically which clearly distinguished his style of politicking from so many people.Saying the vacuum created by his demise will be huge,Venman acknowledged that while they both operated on different political platforms the mutual respect shown by the deceased will be a thing to remember him for.Consoling the family the Chairman called on them to take it as an act of God noting that the deceased lived a life of positive example and will never be forgotten.Speaking earlier on behalf of ALGON,its Chairman and Chairman of Shendam Local Government Council,Hon Miskoom Alex Nantuan said they were there to sympathize over the demise of a promising young man who made friends across political,religious and ethnic divides.He said the entire Local Government Chairmen will continue to pray along with the family for God to grant them the fortitude to bear the loss and grant him rest.Until his demise,the late Dinfa Domtau was the candidate for Langtang South under the banner of the People’s Democratic Party.