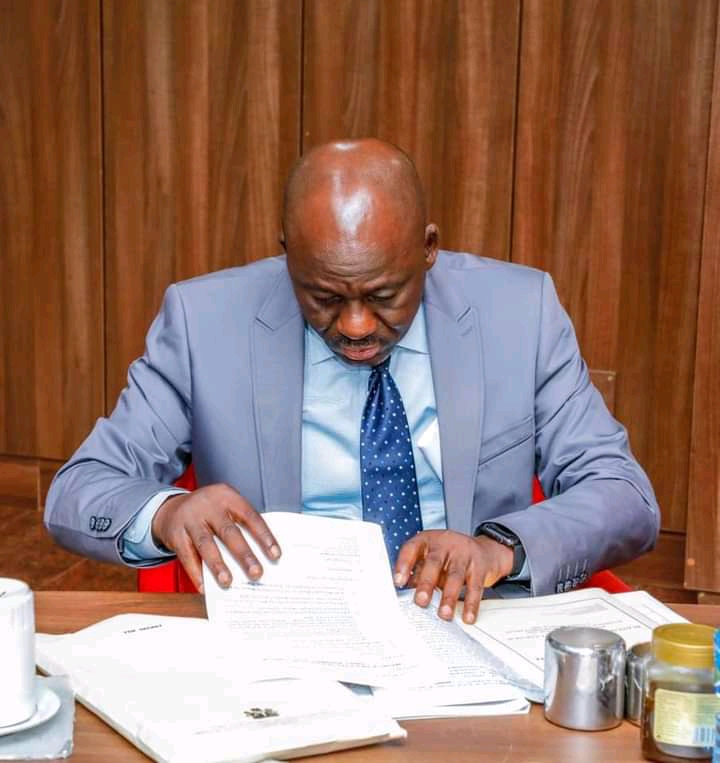 “Says Yakubu Dati is the most outstanding Commissioner”

Plateau Regeneration Group on Sunday rated the Chief of staff to Governor Simon Lalong , Hon Noel Donjur , the Commissioner for Lands and Survey Hon Yakubu Datti as well as the Senator representing Plateau South in the National Assembly Professor Nora Ladi Dadu’ut high for distinguishing themselves in their various offices as well as impacting positively in the lives of citizens of the state .

Others that were also rated high by the group includes the Deputy Speaker of the House of representatives Hon Idris Maje Wase , the Federal House of Representatives Member representing Pankshin/Kanam/Kanke constituency of Plateau State Hon Yusuf Babayo Adamu Gagdi , the Director of press and public affairs to the Governor of Plateau state Dr Simon Macham , the Chairman of Langtang South Hon Rims Samson Nimchak
as well as that of Riyom Hon. Mafeng Gwalson for transforming their local government councils .

This was contained in a press statement made available to newsmen in Jos on Sunday and signed by Pam Datri the Public Relations officer of the group.

The group said that Hon Noel Donjur remains the best chief of staff in the history of Plateau .

“He is also the most principled chief of staff Plateau has produced “.

They described Noel Donjur as a man of destiny and bridge builder.

The statement further reads that “That Governor Simon Lalong alongside his deputy Prof Sonni Tyoden as well as his Chief of Staff Hon Noel Donjur ,the Secretary to the Government of the state Prof Danaladi Atu has created an enabling environment for peace, politics without bitterness, development and businesses to thrive in Plateau .”

“we commend Hon Donjur for the good jobs he has been doing in Plateau since he got appointed as chief of Staff to his Excellency ,Governor Simon Lalong and called on him to continue to do more .

The group further said that Hon Donjur is a man of destiny “Sir your coming on board as Chief of Staff to Governor Simon Lalong has brought a new lease of life to governance in the state .”

The group also lauded the developmental strides of the Commissioner for Lands and Survey Hon Yakubu Datti for revamping the ministry .

“We at Plateau Regeneration Group PRG rates the Commissioner for Lands as the best commissioner in Plateau saying that he has distinguished himself through his selfless service to his constituents and Plateau at large through his office.” We have carried out our research and come to conclusion that Dati stands out tall and we rate him as the most outstanding Commissioner in the Lalong led adminstration “

Dati is working so hard and keeping up to the mandate of Governor Simon Lalong in ensuring that necessary incentives like easier access to land titles are implemented and the State One-Stop-Shop Initiative is completed so that all obstacles to doing business is removed.

“, Yakubu Dati is keeping up to the mandate of the rescue adminstration “

“Hon Dati is also always in touch with his constituents and preaching the good message of the the Lalong led rescue administration .”

“We commend Governor Lalong for appointing Hon Datti as Commissioner and call on him to continue to do his job diligently” the group added .

The group also extolled the leadership virtues of the Senator representing Plateau South ,Professor Nora Ladi Dadu’ut for providing quality legislation to the good people of the Senatorial Zone as well as empowerment of Youths , women since she got elected .

The group stressed that the Senator who is less than 9 months in office has distinguished herself that she
has the interest of the people of her zone ,Plateau and Nigeria at heart .

They lauded the Senator for her courage, patriotism and commitment to nation building as well as her quest to better the wellbeing of women and youths in her consistency .

“Gagdi is a progressive who has the interest of the people and Plateau state at heart .

The group further added that Gagdi’s achievement in less than two years as a federal lawmaker has brought development to his constituency.

“Gagdi has portrayed himself as one of the most remarkable leader in Plateau state.”

To us Gagdi is the only one who can represent the interest of the youth , women ,aged and others and defeat any candidate of other parties in the state comfortable in PKK come 2023.

Gagdi is a detribalized Nigerian who has carried all along since he became a lawmaker.

The statement further reads that ” To us Gagdi is a marketable material for the All Progressive Congress in PKK come 2023 .”

“His good works are there for all to see , he has stood out so tall “.

They further said Babayo is a man of performance and integrity and he would appeal to the electorate during the 2023 elections.

The group also appealed to the people of PKK to support Gagdi and the APC at all times.

Babayo has demonstrated his preparedness for public service by his incontestable public-spirited disposition and commitment to the welfare of his people, thus solidifying his political credibility and enhancing his electability.”

While commending Gagdi for “striving to attract projects and development to his zone ” the group urged the electorate to support him for a second term as their Federal legislator, noting that “a return of Gagdi to the Federal House would consolidate on gains made so far.”

Plateau Regeneration Group further commended the Director of press to Governor Lalong Dr Simon Macham , the Information Commissioner Dan Manjang and David Daser, the DG of Plateau state information technology agency for the good works they are doing in the Lalong led adminstration .