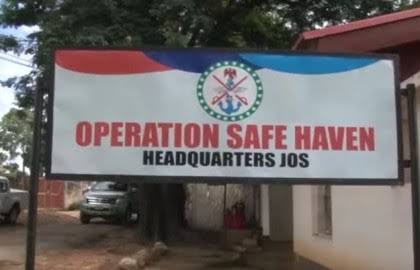 Rather, OPSH explained that Anas was a victim of mob attack saying its men did not only rescue him from being lynched by the mob but also took him to a hospital for treatment.

Reacting in a statement to a graphic picture of the victim,titled:” 14-year old Anas in critical condition after Nigerian soldiers stationed at Barkin Ladi in Plateau State brutally tortured him,claiming to teach him a lesson”, OPSH asked the general public to discountenance the report it its entirety, insisting that it was not only false but also misleading.

In the statement by its Media Officer, Major Ibrahim Shittu, the OPSH explained that contrary to the report, its men rescued Anas Usaini from being lynched by mob who wanted to use him to settle scores with his friend, a notorious criminal identified as Gaddafi.

The military outfit in the statement ,further explained that contrary to the report, its men only swiftly rescued the victim following the tip-off from members of the vigilante group from the area.

OPSH wondered why it was linked with the ugly action of the mob when its men have been carrying out their duties professionally.

“The statement read:”Our attention has been drawn to an online post by Sahara Reporters insinuating that the troops of Operation Safe Haven Sector 4 tortured one 14 years old Anas Usaini at Bisichi Area of Barkin Ladi Local Government Area of Plateau State.

“We wish to categorically debunk this allegation in it entirety as it is not only false but misleading. We urge the general public to discountenance it.

“We, however, wish to set the record straight as follows:That contrary to SaharaReporters’ twitter message that the troops of Operation Safe Haven Sector 4 tortured one 14 years old Anas at Bisichi Area of Barkin Ladi Local Government Area of Plateau State,investigation revealed that, the victim was attacked by mob.

“This followed earlier incident of sporadic gunshots at Bisichi Area on June 5, 2020 ,that resulted to one Aminu Mohammed sustaining gunshots wound on his mouth from a stray bullet purportedly fired by the victim’s associate,Gaddafi Lamo’s gang.

“The youths from the area went in search of Gaddafi but could not find him as information filtered that he had fled from the town.

“However, on September 10,2020, one Anas Usaini who is said to be Gaddafi’s boy and sighted along side with him on the day of the incident, was caught by the aggrieved youths.

“The agitated youths lynched Anas Usaini before troops of Operation Safe Haven deployed at Bisichi Area Command swiftly rescued him following the tip off from members of the vigilante group from the area.

“The Sector 4 Commander ordered that he should be taken to the hospital immediately for medical attention.

“It should be noted that Gaddafi is a notorious criminal that had sustained several gunshots wounds following his involvement in armed robbery operations. His gang helped him escape to an unknown location in Bauchi where he received medical attention and later returned home when he noticed that the dust was down.

An allegation of Gadaffi’s active involvement in the assassination of Chairman Miyetti Allah Cattle Breeders Association of Nigeria (MACBAN), Bisichi Chapter, Mallam Yahaya sometimes this year is also being investigated.

“The fugitive reportedly had issues with the late Yahaya following suspicion that he was giving information about criminal activities and elements responsible to security agencies.

“Members of the public are requested to disregard the false allegation as OPSH will continue to discharge its mandate professionally. “