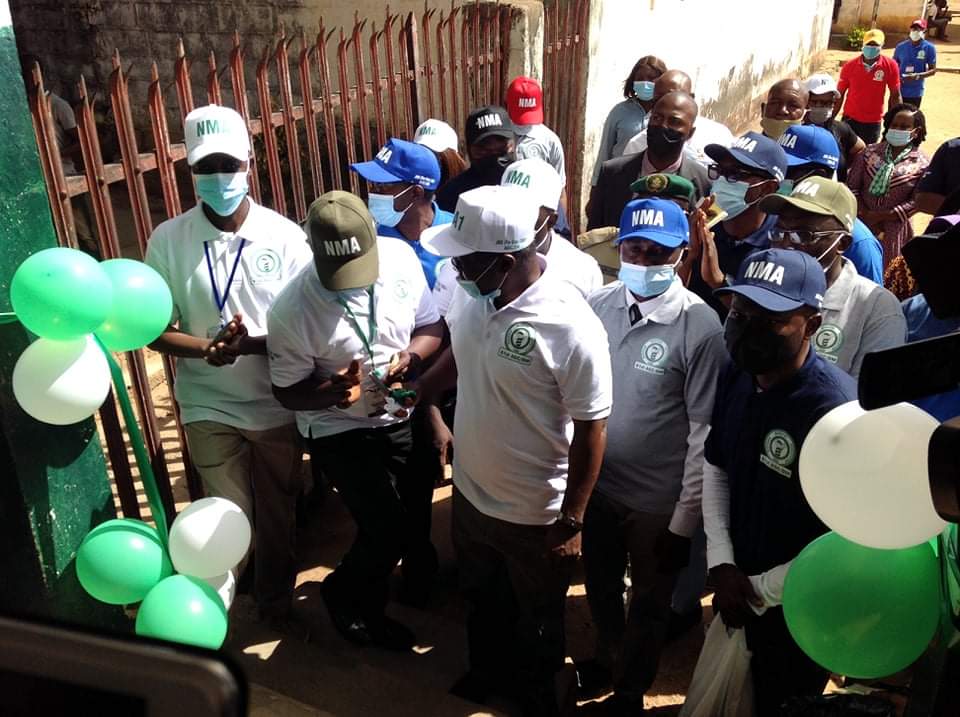 The high powered delegation is being led by the President, Prof. Innocent Achanya Otobo Ujah FNMA, mni being flanked by the National Officers, Plateau State Chapter Officials under the leadership of Dr. Innocent Emmanuel and other Health Professionals.

Prof. Innocent Ujah flagged off the NMA 2021 AGC/DM with a Medical Outreach at the Nigerian Correctional Services, Jos Custodial Facility.

Prof. Ujah said the medical outreach gesture is in furtherance to the government commitment to universal health coverage. He said the choice of the Correctional Facility is to show that everyone with health needs should be able access same.

He said not having financial capacity should not restrict any Nigerian from accessing quality healthcare services. He harped on the need for the citizens to have both financial access and physical access to facilities.

At the Jos Correctional Facility, the delegation were received by the Controller of Prisons, Engr. Dr. Daniel A. Ojonimi who was flanked by other top officers of the Command.

The delegation was also at the Palace of the Gbong Gwom Jos to pay courtesy visit to His Majesty Da Jacob Gyang Buba, CON.

Prof. Ujah told the Royal Father that they were at the Palace to seek his royal blessings.
He said this is the first time Plateau State is hosting the Annual General Conference.
He said as provisional, they will work towards achieving universal health coverage which is a critical component of the Sustainable Development Goals (SGDs).
He posited that financial poverty shouldn’t be a barrier to access health services.
He said as Health professionals, they are disturbed about brain drain arising from the existence of favorable professional opportunities in other Countries of the world. He charged government at all levels to give attention to the health sector, human capital and infrastructural development as well as investment in health equipment component.

The Royal Father who was flanked by some District Heads appreciated the delegation for the visit and commended health professionals for their contributions to the wellbeing of the populace, growth and development of the Nation.
He said achieving a healthy Population despite the challenges is possible if the right strategies are put in place.
He admonished them not to make the Conference end as a jamboree but to be an avenue to assess the overall performance of the Nation’s health sector and advice accordingly. He also charged them to put in their best towards taking the health sector to enviable height.

The delegation was also at Bingham University Teaching Hospital Jos on a courtesy visit to the management of the Health Institution.

Prof. Ujah lauded the Institution for its Health care service delivery, training, capacity building and for providing job opportunities. He said the Institution is building Human capacity, providing equipment and attending to the health needs of patients which are the most critical components. He said the delegation was there to discuss better ways of overcoming the constraints bedevilling the Institution.
He posited that Doctors have greater roles to play in the growth and development of Nigeria. He urged them to make the welfare of the staff top priority.
He said NMA will look at area of synergy with the Teaching hospital for efficiency and effective service delivery.

The Chief Medical Director of the Institution, Prof. Stephen Ajen Anzaku expressed joy over the visit saying Bingham University Teaching Hospital which was established in February, 1959 is well known for managing Lassa Fever and Vesicovaginal fistula (VVF) in the entire Nation. He said the first Lassa Fever from Borno State was managed at the Hospital.
He said patients all over the North patronize the facility.
He said funds are the major challenge the Institution is being confronted with.
He said the Institution is contributing immensely to the health system in the Country. He made case for Private Teaching Hospitals to be included in the Doctors’ residency programme.