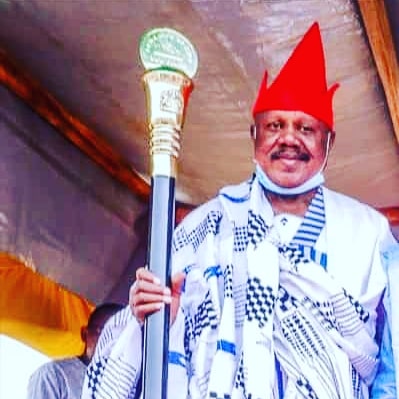 Kwo chiefdom is gradually taking a holistic and progressive paradigm shift as Long Kwo His Royal Highness Miskoom Fidelis Longtoe Attahiru I had his first congress meeting on Wednesday April 28, 2021 with the Four (4) ruling Houses (Kaskang, Lakwaram, Mpoema & Nuku) of Kwo Chiefdom, presented his blueprint and declared open door for all those interested in vying for any vacant traditional titles in Kwo Chiefdom (cha’at Long).

The meeting which took place in his office at Moekwo (Kwande) the Headquarters of the Chiefdom had in attendance an encouraging number of the sons and daughters (Aged and Youths) of the four ruling Houses of the Chiefdom drawn from Luukwo and Moekwo towns, including some contestants to the throne with the Royal Father.

The Royal Father gave his words assuring his people that peace and unity will be maintained in Kwo chiefdom, assuring that he will do everything possible to curtail the security challenges been experienced in the Chiefdom.

He said the challenges and difficulties faced as a result of lack of a paramount ruler in the chiefdom has finally come to an end, adding that it is God’s will that he became the Paramount ruler of the chiefdom.

He promised to do everything possible to encourage the youths of the chiefdom and as well engaged them them be self reliance several areas of endeavours, which said will take most of them off the street and bring development to the chiefdom, Quaanpan LGA, Plateau State and the country at large.
“I will make sure I draw the attention of the government and our prominent sons to the chiefdom so that we can benefit from the government of the dayl”..the monarch added.

In another development, Staff of National Population Commission who are Qua’an-Pan LGA for the house demarcation exercise were received by HRH Miskoom Attahiru I in the Office during the meeting, who had the opportunity to enlighten them their assignment.
The staff said the exercise can only succeed if the community give them maximum support and cooperation.

At the end of the meeting, the Royal Father gave his royal blessings to his kinsmen and wished them safe journey back home.