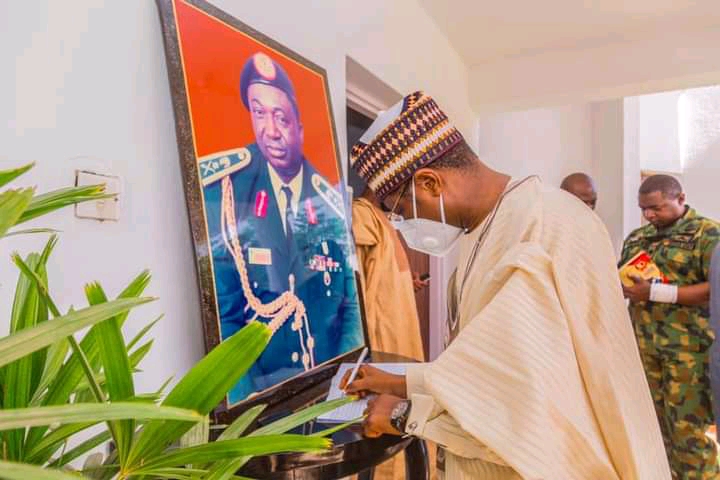 The Executive Secretary, Nigeria Christian Pilgrim Commission, Rev Yakubu Pam has told the widow of the late Chief of Defence Staff and one time ECOMOG Field Commander, Mrs Esther Dogonyaro not to remain in mourning but to be focused and courageous as they mourn the death of their father.

Rev Pam said this when he paid a condolence visit to the Rayfield residence of the late Defence Chief, Lt. Gen. Joshua Nimyel Dogonyaro who died early hours of Thursday, May 14, 2021 at the age of 80 at the Jos University Teaching Hospital, JUTH.

Rev Pam recalled how the late General worked toward promoting peace and organized the civil community and participated in communal works after retirement.

He said, the late General left behind a good name and played the role of the real Joshua in the Bible by leading his people to self realization and awareness through his active involvement in Church based organizations.

Responding on behalf of the family Barr. Nanpon Joshua Dogonyaro, son of the deceased said they were encouraged with the visit of the ES and said they will surely promote the ideals of their late father by living exemplary lives as they have learned so much from him.

He told the ES that the family were planning to release programme of the burial of their late father and that they were so grateful their father did not die in the war fields but at home.

At hand to receive the ES were wife of the late Defence Chief, Esther Dogonyaro, his immediate younger brother, Alh. Abubakar Dogonyaro, sons, daughter and grand children of the late General.

Plateau Northern Zone is the stronghold of PDP, APC is gone in 2023, Says Hon. Davou Mang