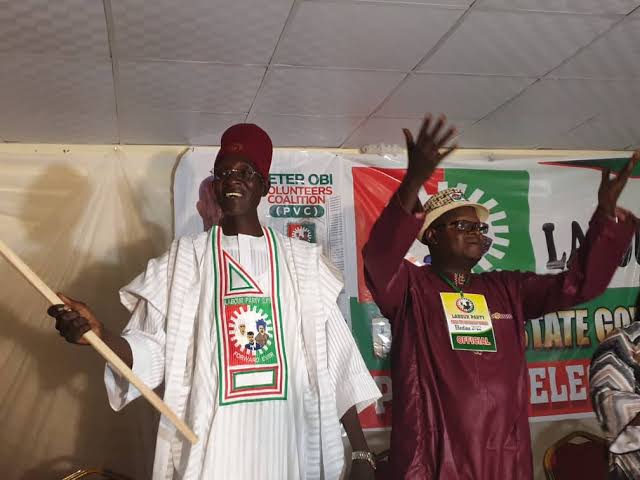 Despite the replacement of the candidate of the Labour party that Saw Dr. Patrick Dakum as the new Flag bearer in a Primaries that held at kent Palace Hotel Jos. However, it seem it is not over yet, as new revelation has it that the former, Amb. Margif is insisting to be in the race , see details of his press release below available to our news desks.

You recall that a primary election of the Labour Party was conducted on the 9 June, 2022 at Retnan Hotel and Event Centre, Bukuru where I emerged the candidate of the party and certificate of return was subsequently presented to me by the National Chairman of the Party to affirmed me as the standard bearer of the party for 2023 election.

Since then, I have taken deliberate steps incollaboration with other members of the party in Plateau and at the National Secretariat to put the party in to better perspective to win the 2023 election. I must say without contradiction that my effort since I joint the Labour Party has endeared several persons from different political parties into the Labour Party.

I wish to state clearly that I have not in any way contemplated withdrawal from the 2023 governorship election in Plateau State and I will not withdraw from the race. I am in the contest to win the election and give Plateau people good governance that will engender development.

I am not in the contest to withdraw, and the ticket of Labour Party in Plateau State is not for sell, therefore those who are clamouring for the ticket and miss leading gullible Plateau people and Nigerians that I have withdrawn from the race should desist forthwith.

The alleged illegal and concocted primary election that brought together people who are selling groundnut, Kunu, Moimoi among others as delegates at the King’s Palace Hotel allegedly owned by the Former Governor of Plateau State Senator Joshua Dariye, is null and void, and cannot hold water.

I call on my strident supporters in Plateau State to keep calm and know that I am still the authentic governorship candidate of Labour Party in Plateau State. I am vying for the office of the Governor of Plateau State because I want to bequeath good infrastructural legacy and return Plateau to the people.

Thank you and God bless you.