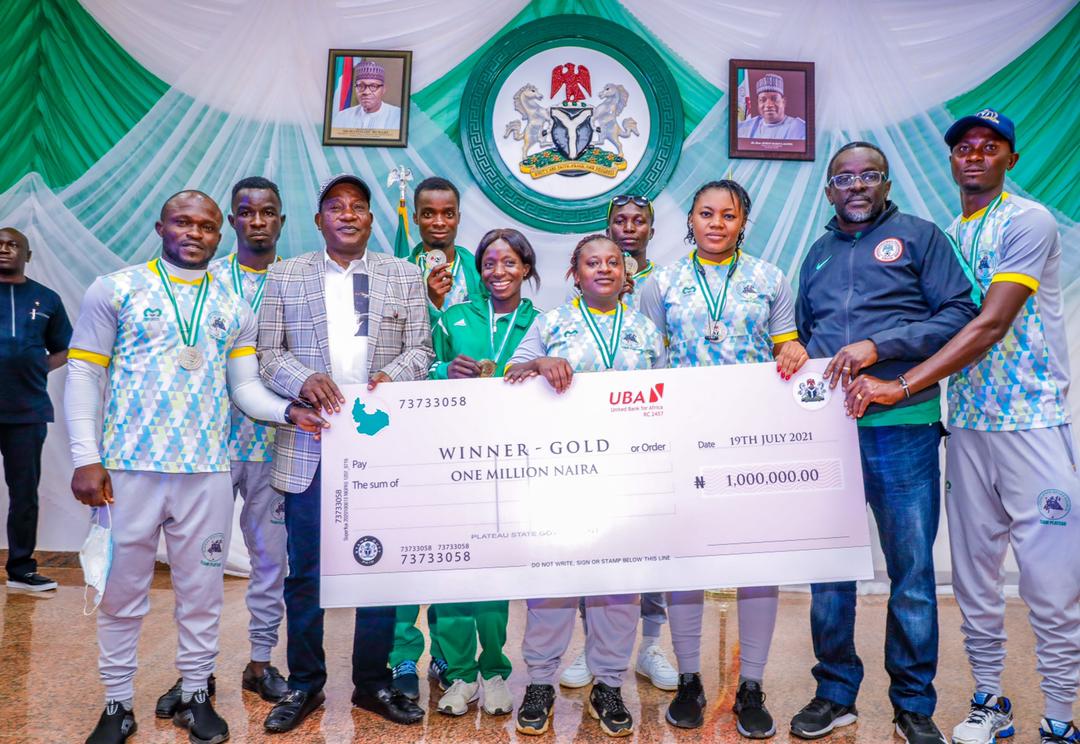 It was a night of jubilation at the Banquet Hall of the New Government House, Little Rayfield as Plateau State Governor Simon Bako Lalong hosted the State Contingent to the National Sports Festival, Edo 2020 where he doled out cash gifts to the athletes who won medals and their coaches.

Governor Lalong said their efforts at the games were worth celebrating and remains a source of pride which reinforces the rich sporting history of Plateau State.

He said “After intensive competition at the 12-day National Sports Fiesta in Edo State, Plateau contingent took the 13th position and came home with 37 medals comprising of 8 gold, 13 silver, and 16 bronze. Although our aim was to emerge top, we are nevertheless proud of the efforts of our contingent who gave their best. I congratulate the athletes, coaches and other supporting staff for making us proud as the second best team in the North and the best in the North Central.”

The Governor said his administration is determined to continue to develop sports particularly by developing grassroots sports which identifies, and projects future stars. He directed the Commissioners for Sports, Education as well as Local Government and Chieftancy Affairs to work together in restoring and reinvigorating the various school competitions, community games and other engagements that have huge benefits for talent discovery.

“I want the situation where each year, we should put together our own version of Plateau Sports Festival where we can comprehensively identify, harness and package our sporting talents who can go out to fly the flag of the State. This will be a springboard for their journey to the global stage” he said.

Commissioner for sports Mr. Victor Lapan praised the Lalong administration, which has continued to pay attention to developing sporting talents particularly at the grassroots through various youth programmes that discover, groom and showcase hidden potentials. According to him, since assuming office, Governor Lalong has sponsored Plateau sportsmen and women to various Championships and Tournaments which resulted in winning a total of 170 gold; 157 silver; and 170 bronze medals.

Lapan said the Lalong Rescue Administration has not lonely emphasised prioritization in project implementation, but has also opened its doors to the private sector to continue partnering with Government by sponsoring various sporting events and assisting in developing facilities.

Team Captain Ifeoma Juliet said the contingent was overwhelmed by the magnanimity of the Governor who surprised the athletes with such handsome financial gifts.

She appealed to the Governor to look at other issues of the welfare and logistics of the athletes, assuring that they will do more to deliver more victories to the State.