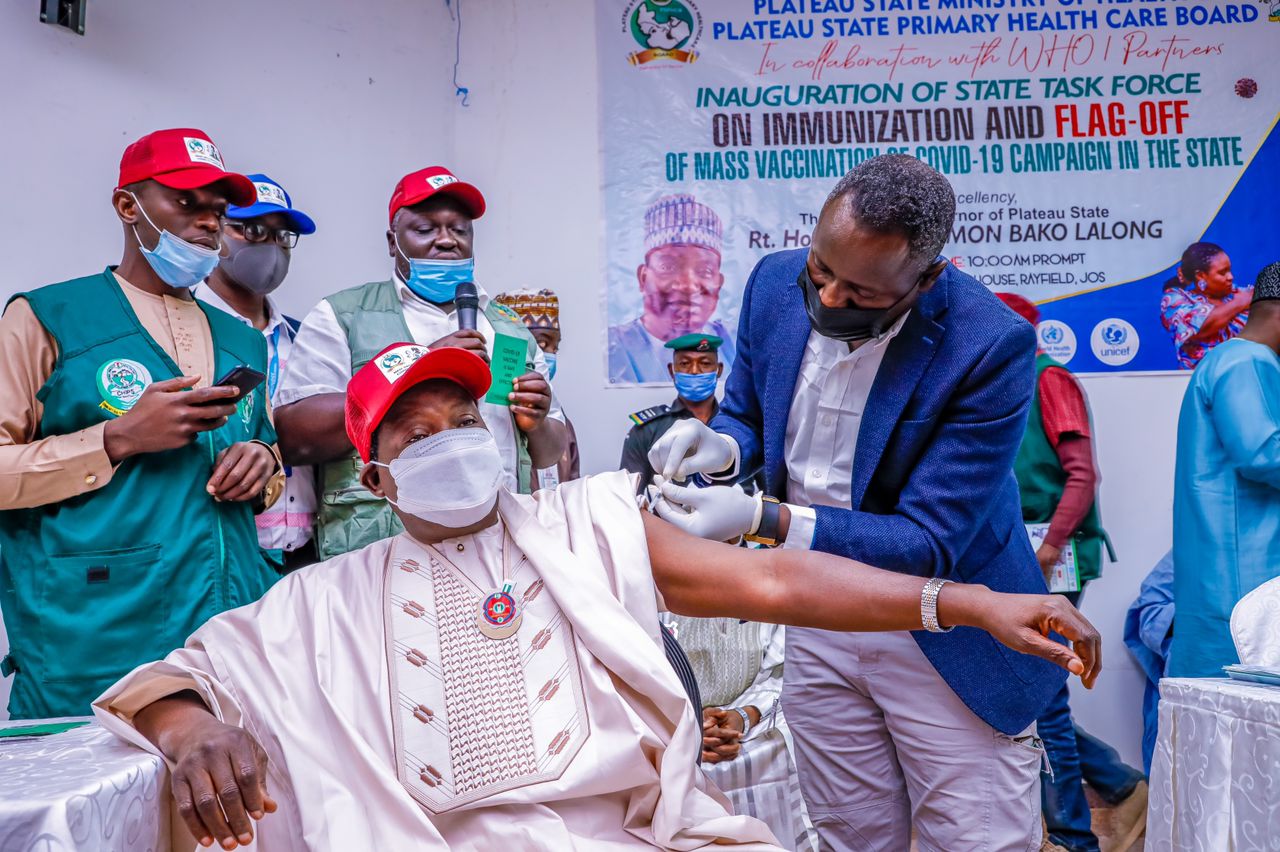 Plateau State Governor Simon Bako Lalong has appealed to the citizens of the State to embrace vaccination against COVID-19 and other diseases in order to ensure that the healthcare of the State is fortified against preventable diseases.

Governor Lalong who also took his booster jab for COVID-19 made the appeal while inaugurating the Task Force on Integrated Vaccination and Flagging off the Mass Vaccination at the Banquet Hall of the new Government House Rayfield Jos.

Lalong said the inauguration of the task force became necessary to ensure that there is consistent and coordinated Vaccination in the State against both COVID-19 and other diseases.

He said “The Taskforce which we are inaugurating today has a  membership that consists of health professionals and eminent stakeholders from across the State with the mandate to create the desired attention required for prompt sensitization and consolidation of achieved gains in the area of vaccination. I am mandating all Local Government Chairmen to oversee their respective LGA Task Forces for successful immunization in order to deliver effective rural health care services to the people”.

Speaking on the flag-off of Covid-19 Mass Vaccination Campaign in Plateau State, the Governor said “You will recall that since our index case was reported and confirmed on 17th April, 2020, Plateau State has recorded 10,002 positive cases with 73 deaths in all 17 LGAs as at 12th December 2021. Our administration responded promptly and with all vigour which ensured that 9,962 cumulative confirmed cases were managed and discharged, leaving only 35 infected persons still receiving and responding to treatment”.

Lalong also announced that the Plateau State Government vaccine mandate is that all citizens of 18 years and above will henceforth show evidence of vaccination or present a negative Covid-19 PCR test result done within 72 hours to gain access to any public office. This will also go hand in hand with observing all protocols in schools, markets, banks, weddings, churches, mosques etc.

These measures according to him are not punitive nor intended to force people to take the vaccines against their wishes. They are simply meant to ensure public safety and guarantee the health of the people against this ravaging pandemic.

Commissioner for Health Dr. Nimkong Lar said the vaccines are safe and not harmful contrary to conspiracy theories, reiterating that no one will be forced to take the vaccine. He emphasized that the Ministry was also concerned about other diseases aside COVID-19 which need more sensitization for vaccination.

The Long Gamai of Shendam Miskoom Martins Shaldas, Chairman JNI, Chairman CAN, and other stakeholders assured that they will do their best to sensitise and mobilise their people flto cooperate with the Government towards achieving desired goals.

Unicef representative in Plateau State Dr. Wazingi Williams presented the global, national and State outlook of the pandemic and its management, urging citizens to make themselves available for the vaccine which is a major way of containing the virus that is still being studied.

Responding on behalf of the Task Force, Deputy Governor Prof. Sonni Tyoden assured that the members will put in their best to ensure that the State achieved its objectives.