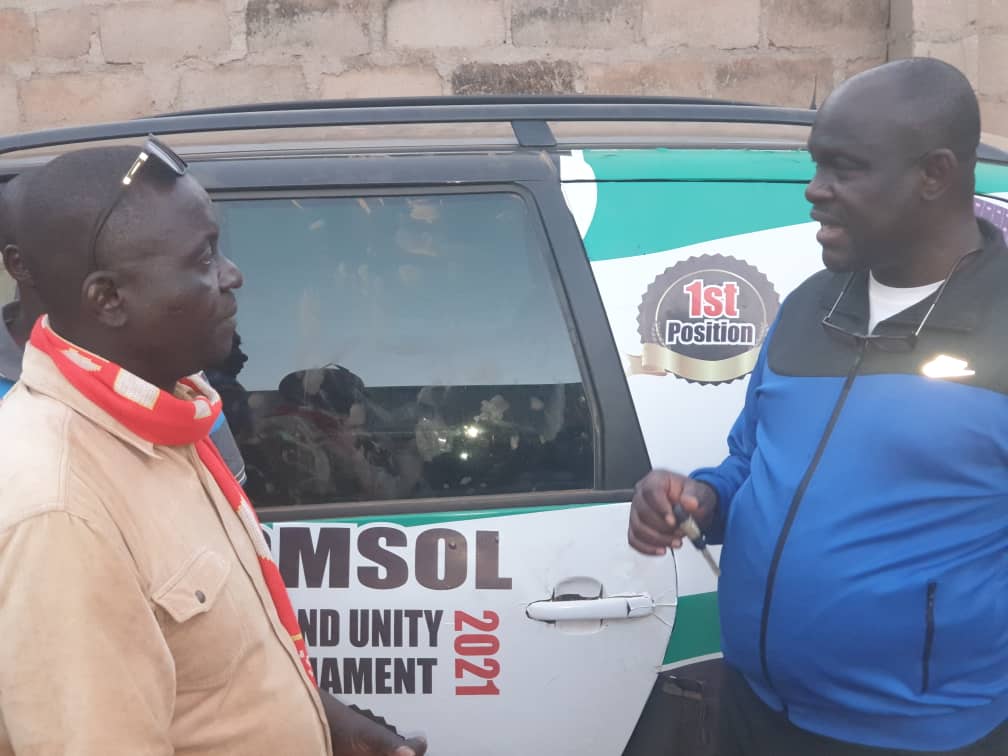 The football tournament tagged, Komsol Peace and Unity Cup 2021 which kicked off in November had 40 registered teams that participated in the tournament.

The Grand Finale of the tournament witness between Dabat Warriors of from Qua’anpan LGA and Yelwa Utd of Yelwa from Shendam LGA, where Dabat Warriors won the match against Yelwa Utd by two goals to one.

Plateau State Governor and Chairman Northern Governors Forum , Rt. Hon. Barr. Simon Bako Lalong who attended the finals of the tournament commended the Federal Lawmaker for organising the football tournament and described it as a good initiative.

He added that game of football is one of the fundamental factors that unites people across divides, saying Plateau State is now the home of football.

Lalong however pledge to ensure the completion of the Shendam Mini Stadium before end of his administration in 2023.

Hon. Komsol thanked and appreciated the Governor for finding the event worthy of attendance; stating that his reasons behind the KOMSOL’S unity cup is to emulate from the peace approach which the Governor has brought back on the Plateau.

He explained that the tournament had 40 registered teams which was aimed at uniting youths in the constituency and promote peaceful co-existence among various communities.

Komsol donated to the position Sharon Bus, Second position Golf Station Wagon and third play Tricycle (Keke Napep) among other consolidated prizes, saying the essence of the competition was to promote peace and unity.

“The aim of this tournament is not far fetch as the name implies ‘komsol Unity Cup’ emanating from my conscious desire to reunite and strengthen the bound between our communities that have existed and shared socio-ethnic cultures for almost a century now, that despite our existing challenges and grievances, we will still have reasons to socialise and smile at each other.

“The game of Football has proven unequivocally to achieved unity effortlessly even amongst a multi-ethnic nation like ours, where people young and old sheath their differences, laugh and shake hands in support of either Plateau United, Arsenal, Chelsea or our National team without asking whether it’s Pan, Goemai, Youm, Piapung, Kanoem or Tehl, a Muslim or Christian who is playing”.

He expressed hope that talented youths that have emerged from the football tournament who play to represent the national team across the world.

“Sports can be a valuable tool for national integration, apart from physical well-being, sports can play an important role for a safer, more prosperous and more peaceful society”.

The Lawmaker added that the tournament is meant to remobilize the teaming hard working energetic youths within his constituency to showcase their exceptional talents and apply their energy positively especially in the perilous times.

Komsol called on the youth and Nigerians to be law abiding, respect constituted authority and shun all negative tendencies in order to achieve permanent peace in the country.

He reinstated his commitment and determination to continue to initiate more people oriented projects that would have direct impact on the lives of the people.

The Executive Chairman of Shendam Local Government Hon. Alex Nanmtuan lauded Hon. Komsol for initiating different programmes that had direct bearing on the lives of his constituents and the state at large.

“What we need from them is to sharpen it so that they can also compete with other world known footballers and also participate in national competitions.”

He also called on the lawmaker not to relent in his efforts in developing his constituency and called on other politicians to emulate him for the overall development of the country.

“Don’t Fight for Politicians, Instead Fight to Attract Development to Your Community” – Dr. Patrick Dakum