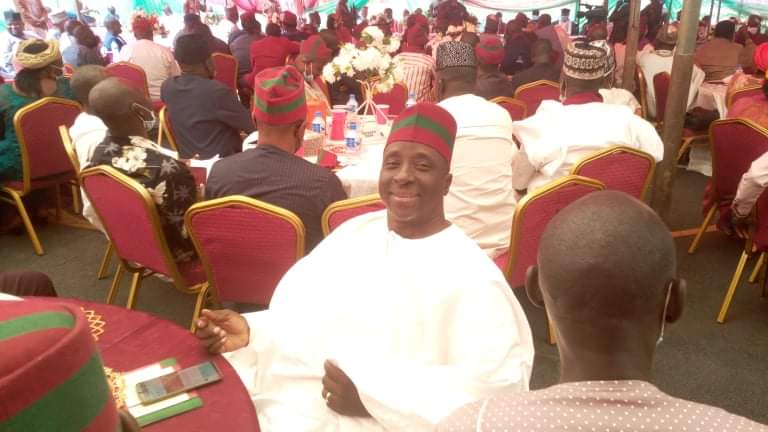 The Gbong Gwom Jos, Chairman Plateau State Council of Chiefs and Emirs and the Chairman of Jos Joint Traditional Council His Majesty Da (Dr) Jacob Gyang Buba, CON today hosted Berom illustrious Sons and Daughters to a Luncheon to mark the New Year celebration with a call on them to work collectively towards the agenda of unity, peace and prosperity of the Berom Nation, State and Nation at large.

The Royal Father appreciated illustrious Sons and Daughter for honoring to be part of the Luncheon despite the short notice.
He decried the level of insecurity bedevilling the Nation and admonished the people to be cautious and exercise high sense of vigilance at all times.

He expressed delight for such great event which is meant to bring the people together to discuss issues that will engender peace, unity, prosperity and development of the Berom Nation, Plateau State and Nigeria.

He said the traditional Council and the registered Berom Organizations will continue to work in synergy for the progress of the land.
With the 2023 general elections around the corner, he urged politicians to engage in healthy and peaceful campaigns and bring home democratic dividends to the people irrespective of their political affiliations.


“Politicians must desist from campaign of calumny and inciting the youths against one another”
He charged the BYM to pursue the collective interest of the Berom Nation, Plateau State and Nigeria.
He urged all to work knowing that one day everyone shall give account of his/her deeds before God Almighty.

His Majesty urged the new Executives Berom Youth Moulders – Association under the leadership of Barr. Solomon Dalyop to pursue the agenda of purposive unity and development.
According to the Royal Father, the youths must abstain from drugs/substances abuse and concentrate on issues that will develop their capacities.
He said the Berom must remain prayerful and be closer to God to overcome the challenges confronting them.

Earlier in his welcoming remark, Da Eric Yakubu lauded the Berom Nation for its resilience and said the idea of the luncheon is to foster more unity.

COCIN President, Rev. Prof. Dachollom Datiri took the exhortation where he admonished the people on the need for mutual respect, love for each other and the need to live in line with the will of God.
Prayer was offered for the Governor of the State and all political office holders in Berom Nation.

The Dagwom Rwey Jos South LGA High Royal Highness Da Amb. Nga Dangyang who spoke on behalf of the District Heads charged the people to be more united and also stressed the need for the youths to take their education seriously in order to be useful to themselves and the society.

A minute silence was observed for the fallen heroes in Berom Nation.

The event also featured song ministration from the Berom Choir Group and Makidi Chuwang who thrilled the guests with his performance and jokes.
Guests were later treated to a dinner of different delicacies.

When our medium interviewed some illustrious Sons & Daughter about what they feel about the event, below are some of their responses:

According to Ngo Hannatu Dantong “The program was well attended by sons and daughters of the Berom nation. Such programs should be sustained. The Gbong Gwom Jos was elated that despite the short notice, people turn out to attend. The emphasis on unity was timely”

Mr. Augustine-Davou Joseph has this to say “a great occasion by His Majesty, a landmark to carry his subjects along in the discharge of his fatherly role of the Beroms Worldwide. It has become an opportunity to honour illustrious sons and daughters for their performances in their various endeavors for the previous year to spur them and others to do well in the current and future years.
We also use the opportunity to pray for His Majesty and his Chiefs, Berom Land, Plateau State and Nigeria in general”

Da Abraham Tonjin, the Gwom Chomo NUBES has these to say “I commend the GG, Da Jacob Gyang Buba for consistently hosting the event, this event is that which brings every Berom critical stakeholder to a round table irrespective of political affiliation, religion or denomination.

This year’s event saw a large and powerful representation from our brothers from Aboro, Sanga LGA in Kaduna state.
We also had the presence of all title holders of the Berom Traditional Council, which included non Beroms.
I am elated that the various Berom Registered Organisations gave their scorecards and other developmental projections.

However, the usual paying of homage by districts was not done, no explanation was given to that effect.
The homage is one of the high points of the programme that people look forward to.
Secondly, the usual donations by sons and daughters for projects was not done. To me, this occasion is the only opportunity that allows for such contributions, the Nzem Berom is to display our rich cultural heritage and Berom cuisines, the annual Wusal Berom is for interdenominational worship where all proceeds are channeled for activities of the Berom Language and Translation Board.
I strongly this avenue offers us opportunity for every wurom to contribute.

Finally, this event should be given the desired publicity after the programme for people to know what HM is doing in terms of uniting his subjects”

Dr. Daniel Kim said “As for the luncheon for Berom illustrious sons and daughters organized by His Majesty. It is really a novel idea where all the illustrious sons and daughters gather for some kind of pilgrimage.
It gives opportunity to take stock of the previous year and thank God for enabling us see the new year. It also enables the RBOs to unfold their plans and activities for the year.
It needs to be sustained with variety of activities each year.
It could also serve as a forum for the illustrious members to present their their score card and allow the people assess such individuals to ascertain what they have done for the people and the land.
Various Districts could organise theirs before the grand event hosted by His Majesty and tow the same line.”

BECO President, Da Gyang Dudu said “If you get his Majesty Well…. I was among those who prevailed on him to do this year’s program.
It’s a gathering aimed at acquainting ourselves with one another and to have close tie with our Royal Father.
It serves as a moment of stock taking and prayers for the Land.
Here we give thanks to God as well as present our scorecards for the year.
On the other hand His Majesty uses such moment to advise and counsel us”