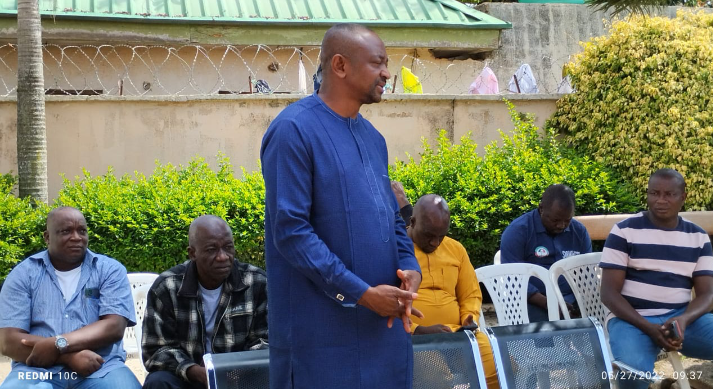 A Chieftain of the Peoples Democratic Party, PDP in Plateau State and an aspirant in the just concluded gubernatorial primary elections, Dr Golu Timothy has called on all his supporters to remain focused to deliver all the party’s candidates in the coming general elections.
He said the pains and bitter experiences of the primary elections should be swallowed in good faith to enable the Party a united House to take back power come 2023.
He said contrary to mischievous insinuations that he will fight the party, he has embarked on self reconciliation within the rank and file of the party to put the house together, despite his withdrawal from the race.

Golu said all these when he hosted his supporters at his residence in Jos the Plateau State capital, to appreciate them for their support and resilience. He called for unity and reconciliation among his supporters who participated in the House of Assembly, House of Representatives and Senatorial Primaries of the party.

He called on his supporters not to fight anyone but ensure they support the PDP ahead of the 2023 General Elections.

Dr Golu stressed that though a painful decision, his withdrawal was done in order to ensure the unity of the PDP Family within the Ngas Nation and the state. He described as very unfortunate divisive actions of some of the party’s leaders leading to the conduct of the primaries, but however said as an ardent believer in God, ” all things work together for good for those who trust in God”.
He used the opportunity to encouraged his supporters who have political ambitions not to fret but be strong and resolute while promising to support them going forward.

Golu congratulated Hon Barr Caleb Mutfwang for emerging as the PDP Flag bearer stressing that as a loyal party man, he will work hard for the party to deliver the Governorship and other candidates in next year’s general elections.

His wife, Mrs Chalya Golu appreciated everyone who supported her husband and described her husband as a loyal, obedient and fanatical member of the PDP who can do anything to add value and strengthen the cause of the party.
On behalf of their family, she thanked and prayed for safety for everyone as they traveled back home.