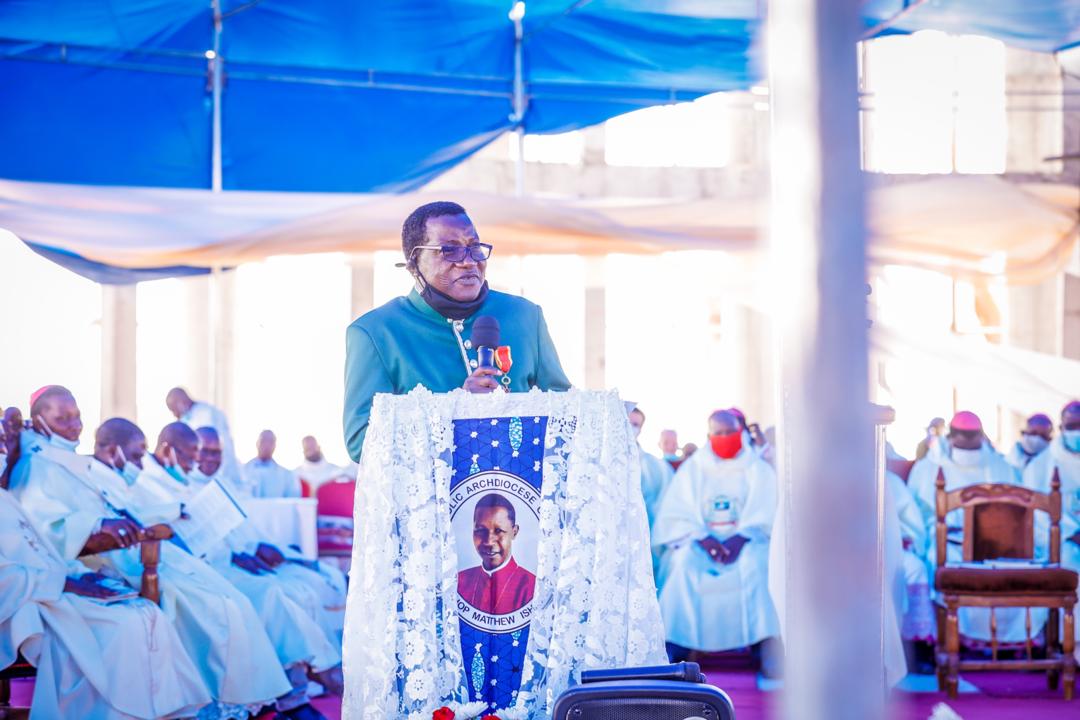 Governor Simon Bako Lalong has again advocated for tolerance and religious harmony as a catalyst for peace, security and good governance in Nigeria.

The Governor was speaking at the installation and reception of Pallium by the new Catholic Archbishop of Jos Most. Revd. Dr. Mathew Ishaya Audu held at the Divine Mercy Cathedral, Lamingo -Jos.

Lalong while congratulating the Archbishop said within one year of assuming duties, His Grace Most. Rev. Mathew Audu has demonstrated that his calling is divine and that he is totally committed to ensuring that the will of God is implemented in Plateau State and the world at large through the Church.

Lalong said the Archbishop has given the Laity, religious and clergy the needed leadership to enable them carry out their duties in the service of God and humanity without any hindrance. He has made personal sacrifices to ensuring that all challenges are addressed to make the propagation of the gospel of Christ seamless.

The Governor said “While it is the duty of religious leaders to speak the truth to power and the public, you should also beware of, and shun rhetorics that promote hate, division, and distrust among the people. You should guard against politicians and other interests that are always desperate to exploit the pulpit for their selfish reasons. The people look up to you for guidance and motivation that guarantees a united, equitable and prosperous society where the rights and privileges of all are guaranteed. Be assured that my administration will continue to work with you as we build a better Plateau and Nigeria of our dream”.

Apostolic Nuncio to Nigeria Most. Revd. Anthonio Fillipazzi said the presentation of the Pallium to the Archbishop is a significant event that confers authority on the Archbishop to discharge his duties in line with the doctrine of the Catholic Church. He called for prayers for Archbishop Audu as he shepherds the Church within his jurisdiction even in difficult times.

Gbong Gwom Jos, Da Jacob Gyang Buba also congratulated the Archbishop and promised the support of the traditional Institution for the Church and the Government.

WArchbishop Audu thanked God for bestowing on him this assignment which he intends to do his best to discharge. He thanked His Holiness Pope Francis for the installation and called for unity in the body of Christ in Plateau State, Nigeria and the world at large.

He also assured of his intention to continue to work for inter-faith harmony, tolerance and forgiveness in Plateau State and elsewhere just as his predecessor, Archbishop Ignatius Ayau Kaigama had done. Archbishop Ishaya Audu also marked his 20th Anniversary as Bishop.