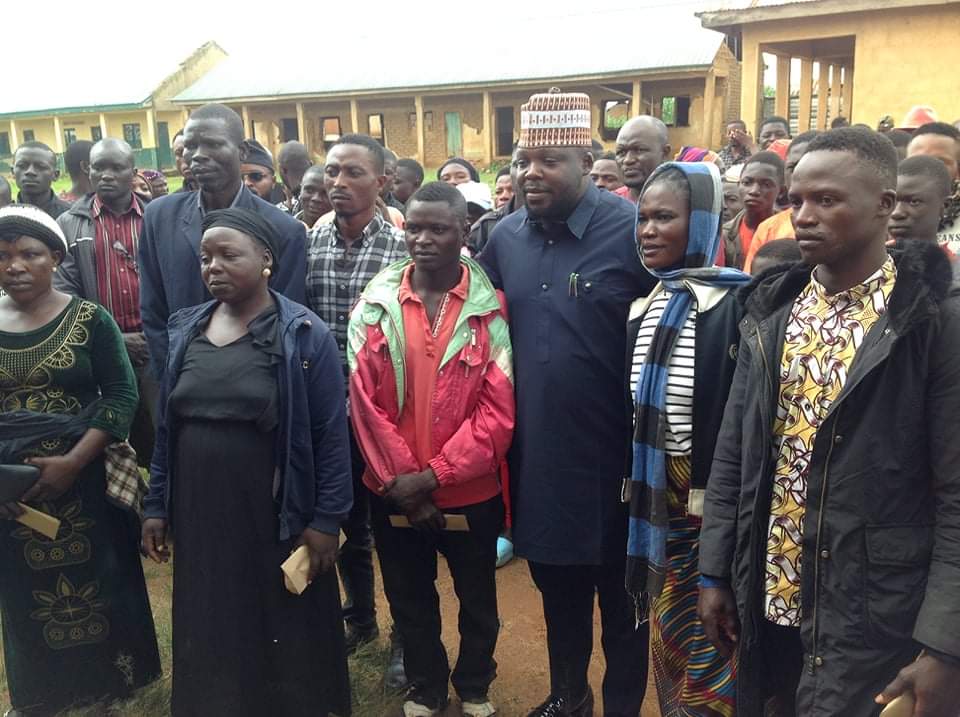 Touched by the predicaments, hardships and trauma being faced by persons whose farm crops were destroyed by criminal elements in Jol Village Riyom LGA, Plateau State on 4th July, 2021, Mr. Ziphion Chrysanthus has demonstrated sense of humanity and empathy through his Philanthropic gesture to the affected persons.

The first point of call of the Philanthropist and his entourage alongside the Sector 6 Commander of the Operation Safe Haven, Col. AH Gwani was the Palace of Gwom Jol (Village) Head where he was received a warmth reception by HRH Da Danladi Taje.

Ziphion intimated the Traditional Ruler of the purpose of his visit which he said was to identify and empathize with the people who were affected by the wicked and inhuman activities of criminals.
Gwom Jol appreciated the entourage for the kind gesture and said his people are peaceful and law-abiding but are at the receiving end of incessant violent attacks which has led to the loss of many lives and destruction of property.
He took time to tell the entourage about what the people have been through over two decades ago.
He called on government and security agencies to redouble their efforts in safeguarding the people and their property.

The Commander Sector 6 of the Operation Safe Haven assured the people of their commitment to nip insecurity bedevilling the area in the bud and called for supports to achieve peace in the area.

While giving financial assistance to those affected, Ziphion said he was moved to assist after seeing the destruction of farm crops by enemies of peace.
He said the gesture is to reduce the hardship being faced by the people and admonished them to remain prayerful and security conscious all the time.
He said the humanitarian crisis that has befallen those affected is massive and he felt knowing the value of humanity, he deemed it fit to visit and encourage them.

“As a human being, I know the value of life and whatever affect you affects me too” he posited.

He urged government and well spirited individuals to come to the aid of the people with humanitarian intervention to ameliorate their sufferings and also address the food crisis that is imminent owing to destruction of food crops.
He further charged government at all levels and security agencies to live up to their cardinal responsibility of protecting lives and property of the citizens.

Speaking on behalf of the beneficiaries, Mrs. Chundung Joshua who could not hide her joy commended the Donor for identifying with them in their most trying times and said the assistance will go a long way in helping them.
She also appreciated him for his words of hope and encouragement which she said has strengthened them.

“We thank you for putting smiles to our faces through your financial assistance and giving us hope” she said.

She prayed God to open greater doors to the Donor and continue to protect him in order to continue with the good works of impacting lives.

Member representing Riyom Constituency, Hon. Timothy Dantong who met the Donor on his way to & fro Jol Village lauded his kind gesture describing him as a Patriotic Nigerian whose sense of humanity knows no boundary.
He appreciated him to identifying with the people of his Constituency and assisting them following the wicked and inhuman destruction to their crops.