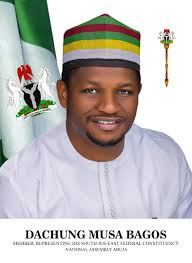 In the wake of another unprovoked attack, the Member Representing Jos South/ Jos East in the National Assembly, Hon. Dachung Musa Bagos has decried the needless and unprovoked attacks on the people of Dong village in Jos North LGA and Kwi, Riyom Local Government, where about 16 persons were killed in cold blood.

He also prayed for comfort to the families, friends and relatives of the victims of this attack.

Bagos commend the efforts of the security in bringing the situation under control, He called for sustained vigilance from the security and community members.

He said ” This is one attack too many, Government at all levels must become proactive and responsive; and not just being reactive to security matters. Things must begin to change before the citizens are forced to defend themselves.”

He again called on the citizens in the affected areas to show restraint by not taking the laws into their hands.