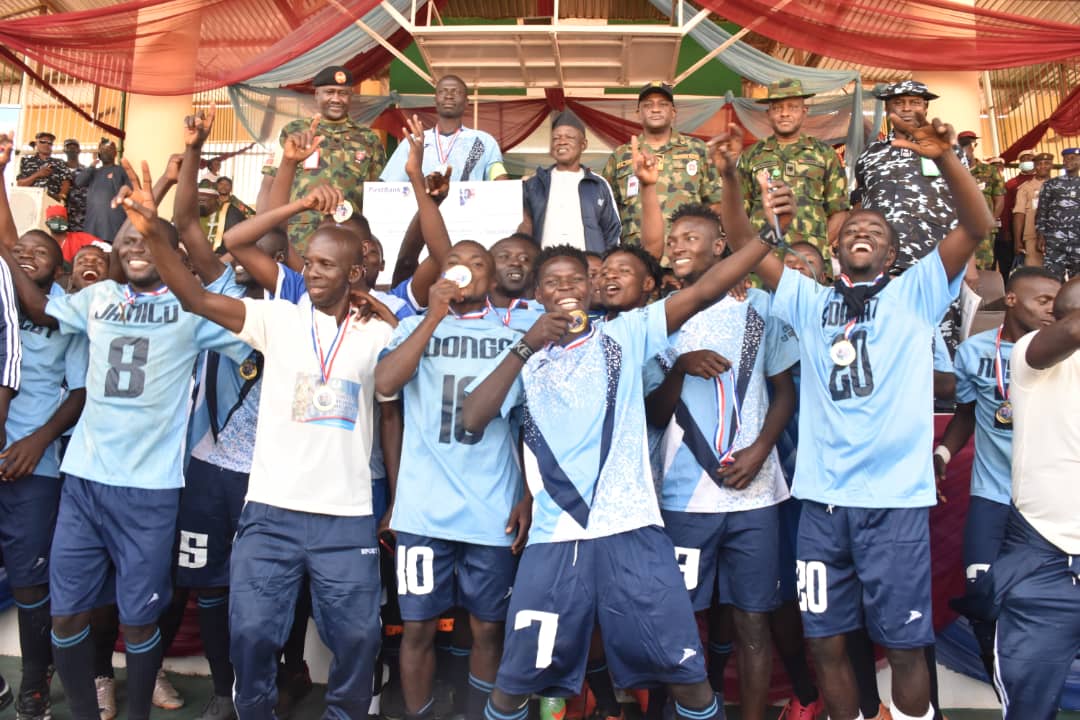 The finals which was played at Rwang Pam Township Stadium Jos got the spectators thrilled with the performances of the final qualifiers, Barkin Ladi Boys Vs. Riyom Boys. Barkin Ladi Boys accurate passes, high ball possession, good mid fielders, great goalkeeper and formidable defenders gave them an edge over their opponent.

Barkin Ladi Boys took the day having defeated Riyom Boys two(2) Nil. The team which performed exceptionally well got its first goal in the first half and sealed its victory with another goal in the second half.

Best Player and highest goalscorer of the tournament went to the Winner.

Vera Yohanna and Adamu Shehu Muazu emerged winners of the Female and Male Marathon respectively and got N300,000.

The Commander of Operation Safe Haven and the General Officer Commanding 3 Armoured Division Maxwell Cantonment Rukuba Plateau State, Maj. Gen. Ibrahim Ali has reiterated the commitment of the security outfit to use sports to enhance civil-military relations across its Joint Operation Area.
He hinted that sports remain a veritable tools and one of the non-kinetic approaches of the outfit towards conflict resolution, building greater unity, peace and trust among the people.

He disclosed that sports play vital role in the unity of the society hence the need for the event considering the security challenges being experienced last Year.

He said the security outfit will continue to deploy strategies that will enhance unity and foster peaceful coexistence.

He charged the people to embrace tolerance, forgiveness, eschew bitterness and give peace a chance saying “No meaningful development can be achieved in an atmosphere of rancour, distrust and insecurity”

While saying the security will do its best to confront insecurity, he called on the citizens to give security agencies the needed cooperation to tackle insecurity.

Chief of Defence Staff General Lucky Irabor who was representing by Naval Commodore Patrick Yekwe commended the teams for their resilience and charged the citizens to accord them support as they work toward ensuring a united, secured, safer and prosperous Nation is achieved.