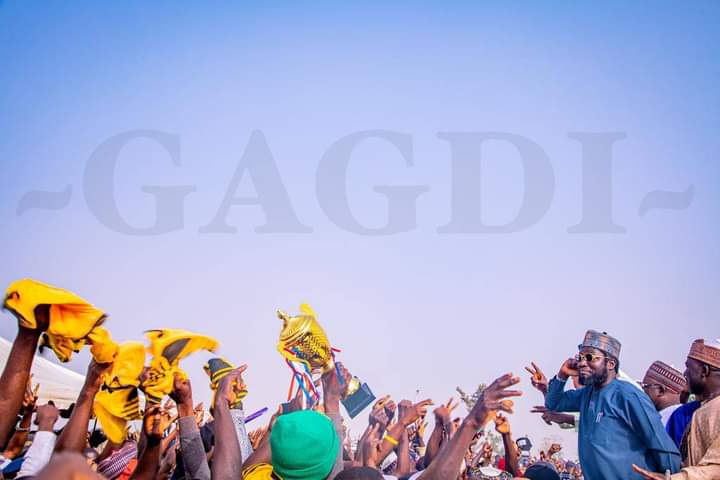 Despite an attempt by some disgruntled politicians to subdue the positive vibes of the massive reception at the venue, what turned out scared them to beat a shameful retreat.

On account of how dear the ecstatic crowd hold the duo, they couldn’t easily find their way into the venue of the event. The combined efforts of officials and security men were all that was needed to enable them find their seats.

A rare display of support for Rt Hon Yusuf Gagdi who has always come to their aid in the last four years and to their guest; a man, who they want to crown as governor come 2023, could not be anything but unprecedented welcome.

In his remarks, Hon Gagdi emphasized his steadfastness to continue to being just and fair in representation. He reiterated his commitment to the unity of Kanam LGA as that is the only viable way to sustainable development and progress of the area.

He assured Dr Nentawe Yilwatda Goshwe and all the APC family on the Plateau that Kanam and APC are synonymous, even as the votes that the party will garner in 2023 from the LGA will be historic.

In their separate remarks, the Chairman of Kanam LGA Dr. Dayyabu Yusuf Garga and the Speaker of the Plateau State House of Assembly, Rt Hon Yakubu Sanda felicitated with the people of Kunkyam on the occasion of their cultural day; and drew the attention of the people to be wary of politicians that don’t have a pedigree to sell their candidacy but rely on cheap sentiments.

Dr. Nentawe Yilwatda Goshwe who spoke on behalf of all the APC family thanked the people of Kanam for the massive show of love and reiterated the zeal of the candidates to perform beyond the expectations of the people if given the mandate in 2023.

He announced a cash donation of two million naira on behalf of himself, Rt Hon Yusuf Adamu Gagdi, other APC candidates present as well as the entire entourage.

As has always been the trend everywhere across PKK, the love, support, and acceptance have been overwhelming. He re-emphasized his commitment to serve PKK beyond the expectations of the people and called on the people to vote for Nentawe Yilwatda as Governor, Diket Plang as Senator, and all APC candidates for other positions.

He appreciated the people of Wokkos for having a worthy son in the person of Rt Hon Emmanuel Go’ar who has so far been helping him tremendously towards seeing that he continues to chart the cause of the federal constituency beyond 2023.

Speaking on behalf of the entourage, Dr. Nentawe Yilwatda Goshwe called on the people of Wokkos to vote for APC in all elections as that was the surest way towards sustainable, development and progress of the area and indeed the state at large.

He also announced a cash donation of two million Naira only on behalf of himself, Hon Yusuf Gagdi, and Hon Diket Plang.

The covenant of support between the people and Gagdi has continued to wax stronger by the day, a testament to the fact that, when you are offering selfless service to the people, they will continue to love and support you beyond imagination.