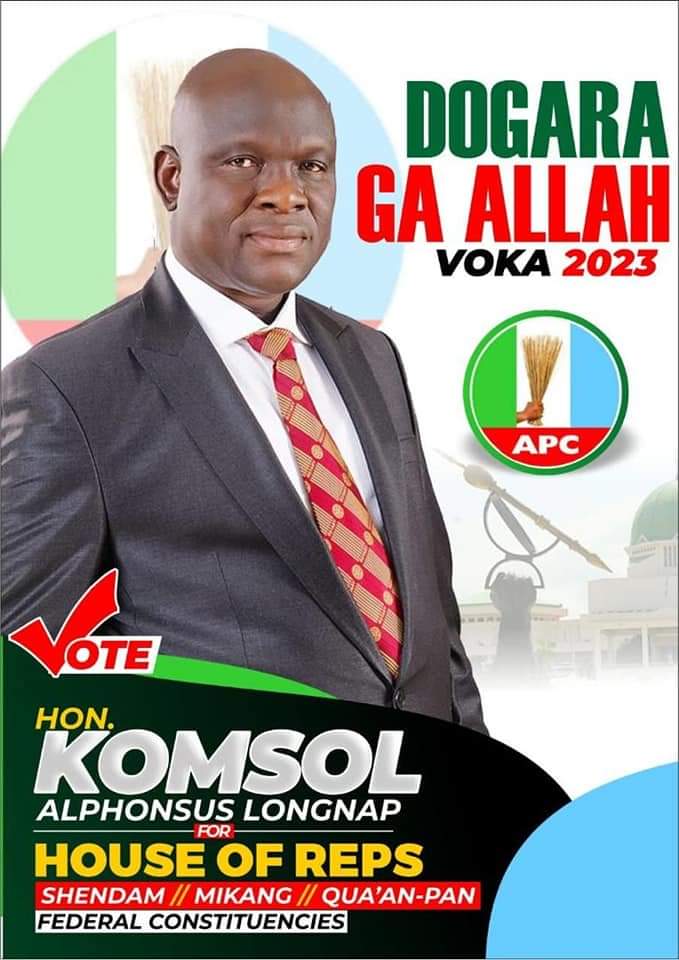 There is no doubt that Hon. Komsol has performed far beyond expectations since he assumed membership of the Federal House of Representatives representing the good people of Qua’anpan, Shendam and Mikang at the National Assembly Abj.

Hon Komsol has tremendously impacted on our communities, touched the lives of so many people in the rural areas, improved drastically in other areas like Education, Agriculture, Health, Empowerment and Grassroots Mobilization.

It is also on record that Hon Komsol is much more very accessible than any other representative in the recent times as he is also at home and in contact with his Constituency consistently.

Also, worthy to mention is the fact that Hon. Komsol is a very dedicated, loyal and hardworking Party man that has been sponsoring and empowerering Party activities within his Constituency and state at large.

Komsol’s empowerment programs encompasses all fronts ranging from the Elderly, Youths, Women and the the Traditional institutions. He is neither discriminatory nor class sensitive in any way. Clearly, all his constituents are very important to him.

Above all, Hon Komsol’s greatest gift to the people of his Constituency is the fact that he has mastered the act of lobbying which has helped him in achieving so much within little time as earlier expected and as such when reelected he will be able to consolidate and do more to his constituents.

To the APC DELEGATES from Qua’anpan, Shendam and Mikang federal Constituency;

Please Vote for an experienced party man that has been taking good care of the party structures in the past three and half years.
Vote for an experienced legislator that has mastered the act of lobbying already so as to attract more goodies to his constituency.
Vote for a Grassroots Politician that has been very accessible to you all.
Vote for Trusted, Reliable and Dogged Politician that has the CAPACITY and POPULARITY to deliver the Party in the General elections come 2023.