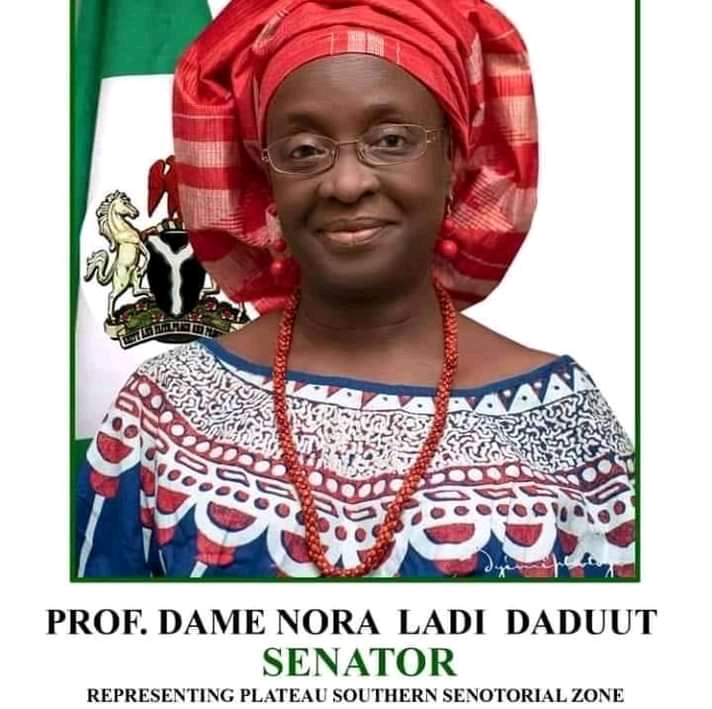 Women group in Plateau South Senatorial zone on Tuesday extolled the leadership virtues of their Senator ,Professor Nora Ladi Dadu’ut for her support to them since she got elected to the National Assembly .

They further called on Dadu’ut not to be distracted but to continue to provide quality legislation to the good people of the Senatorial Zone .

The group in a statement signed by Juliana Nanjul their spokesperson ,and made available to newsmen in Jos, said “we would use this opportunity to thank our senator for the good works she has been doing in her constituency since she got elected .”

The group Specifically commended Senator Daddut for her efforts at empowering women in the zone .

The Group stressed that the Senator has offered quality legislation and has done well in empowering youths and women in her constituency .

The statement reads that Daddut is a Politician that has the interest of the people of her zone ,Plateau and Nigeria at heart .

They lauded the Senator for her courage, patriotism and commitment to nation building as well as her quest to better the wellbeing of women and youths in her consistency .

The statement reads that “We have noticed your quest to improve the standard of living of women and the aged in the society .”

“Prof Nora who is the first female Senator from Plateau state has so far proven that she is delivering her campaign promises .”

We are confident that you would work for the betterment of our Senatorial zone , Plateau and Nigeria in General .”

“Please ma do not be distracted ,continue to do your good works ,we the women of the zone are behind you ,they added

They called on people of the zone to rally round Prof Nora and ensure that she excels as senator of the zone .