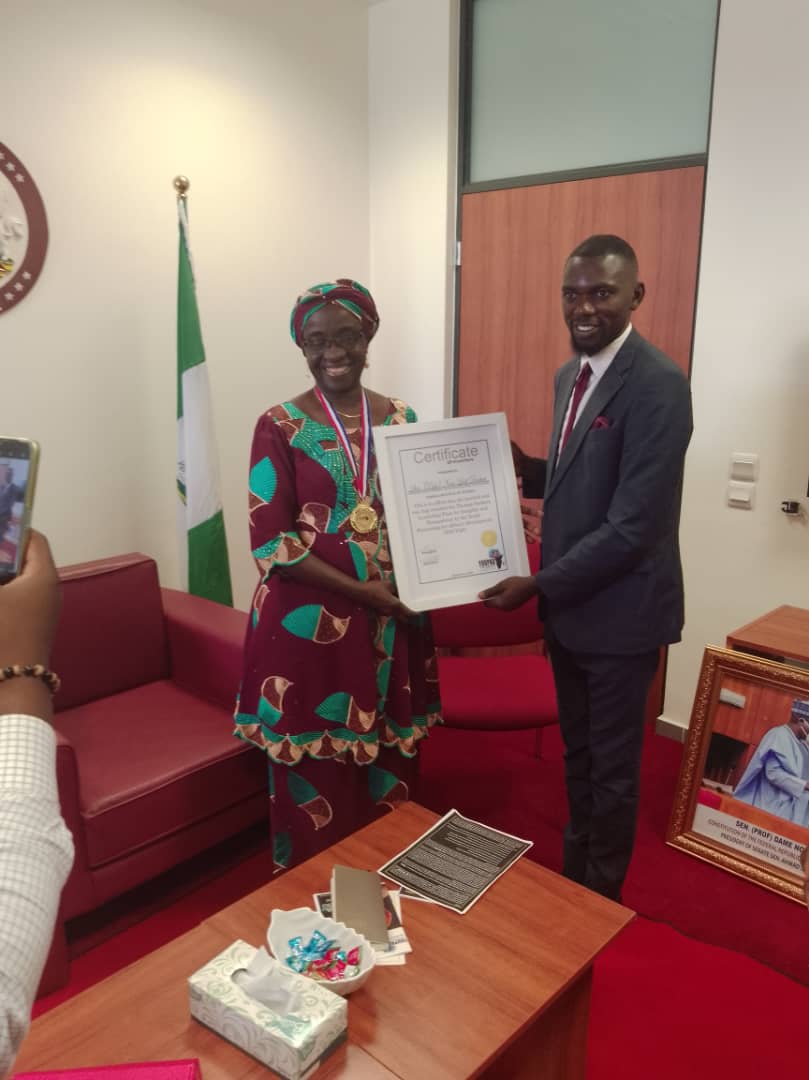 YOUPAD is a Pan-African Organisation with headquarters in Kigali with the vision to equip youths with leadership and entrepreneurship skills towards building an Africa with intellectually equipped youths that will represent a dynamic youth force in the global space.

A statement made available to newsmen in Jos said that the delegation comprised of the President, Comr. Coulibally Hameed from Ivory Coast, the secretary, Comr. Donald Kewul Daniel from Ghana, Comr. Pemambu Brenda from Cameroon and the Nigerian co-ordinator, Comr. Nwankwo Henry Nkem.

The leader of the group Hammed lauded Senator Prof. Dame Nora Daduut for the good works she is doing at her Senatorial District since she got elected into the National Assembly.

He said that the award is in recognition of Senator Daduut’s giant strides in community development and empowerment as well as her outstanding service to humanity in her constituency and the nation at large .

The President of the group described Senator Daduut as a dogged politician who is passionate about the development of the society, stressing that she has given special consideration to youths and women who are often victims of societal mishaps.

They added that Sen. Prof. Nora Daduut has distinguished herself as a selfless leader of astute, erudition, outstanding, understanding and articulate attribute and that she is one of such rare prominent African women that is writing her names on the very heart of history as a matter of dedicated service to God, humanity and country which is in line with Thomas Sankara’s ideology.”

“Our terms of reference for conferring this honour to your esteem person includes but not limited to your hard work and dedication to National service via academia and politics, high administrative acumen and selfless leadership ideology, positive transformation of the Plateau South Senatorial District sine your assumption of office as a Senator.”

Speaking in her response, the Awardee Dist. Senator Daduut expressed her joy and gratitude to YOUPAD and the delegation for their important and prestigious International Award.

She said that she was humbled by the accolades as well as charitable words of encouragement by the President and that she was surprised and marvelled at how YOUPAD was able to identify her for the Award.

Senator Daduut said that her focus is certainly on the Youths and women.

” My desire Is to empower women and youths towards developing their capacity in skills acquisition, self-reliance business, building both in public and Private sectors.

Senator Daduut commended YOUPAD for their wonderful programme ‘’Africa for Africans added that she totally subscribes to promoting the zeal in the YOUPAD to inspire African leaders to join hands in the struggle to revive and revamp the values of African youths for better development.

” This award will no doubt encourage me to continue to do what I know best, contribute to the development of our Nation and Africa