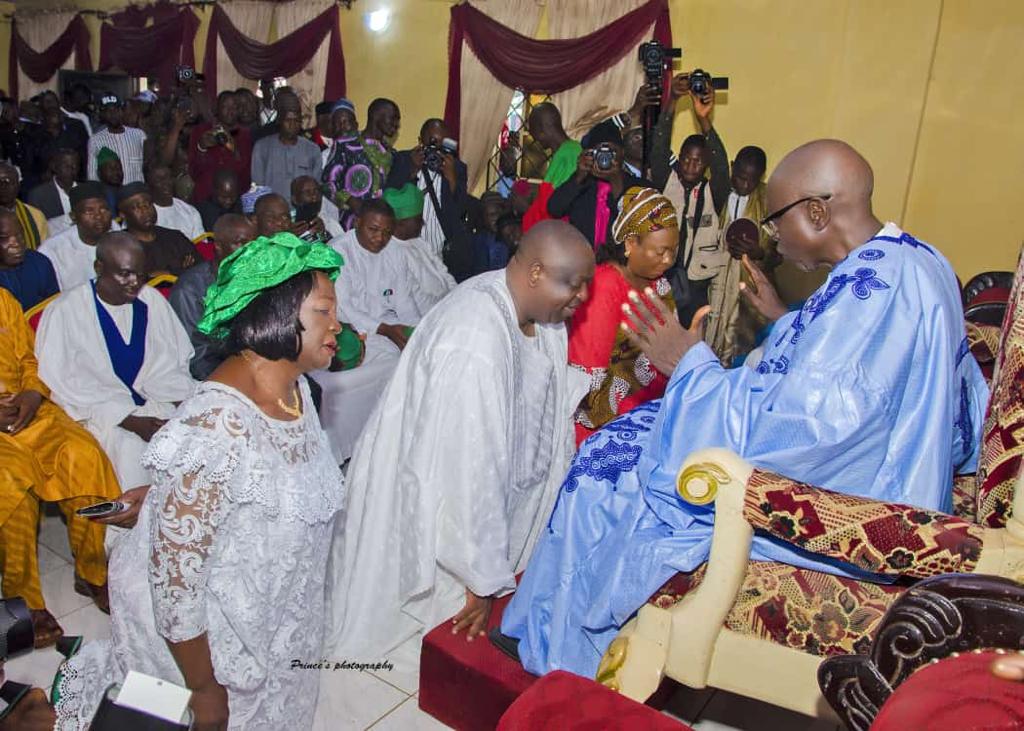 Plateau State Gubernatorial Candidate of the Peoples Democratic Party (PDP), Barr. Caleb Mutfwang has received the royal blessings of Mangu Traditional Rulers and Plateau elders to win the 2023 governorship election in the State.

He noted that Plateau has been a home of PDP and the people are united to return the party to power to provide credible leadership that will enthrone massive development in the State.

“I honestly feel very elated, there is nothing that is good as being accepted by your people and I see that my candidature has brought joy and excitement to the people of Mangu Local Government Area and Plateau people at large.

“I am glad to have been accompanied home by a mammoth crowd of people are across the state to make my first journey home since I picked the PDP ticket, it is so gratifying.”

Mutfwang who left an indelible footprint as former Executive Chairman of Mangu Local Government Area said he had the opportunity of working closely with people at the grassroot and assured that every ethnic group would be given a sense of belonging if trusted with the mandate to lead the state as Governor in 2023.

Mutfwang said further, “We are engaging critical stakeholders across the state to ensure that we get prepared ahead of the electioneering campaign, we are reconciling party members and making sure that we sensitize people so that when the campaigns start in earnest, we will go in as a united people.”

He encouraged the crowd to participate actively in the INEC voter’s registration and vote for massively for PDP to reclaim and rebuild Plateau and Nigeria.

Mutfwang described the torrential rain downpour as a sign of God’s blessings that will usher victory during the 2023 polls.

The Deputy Governorship Candidate, Hon. Josephine Piyo applauded women for coming out in their numbers to received the PDP governorship candidate who has great consideration for women in the rebuilding of Plateau State.

She said Mutfwang would be gender friendly in providing leadership in Plateau if given the mandate, having cede the deputy governorship position to women and assured that women will play key role in the government.

The PDP Zonal Vice Chairman, North Central, Hon. Theophilus Dakas Shan described the turn-out as victory in waiting and urged the people to vote for PDP from top to bottom.

He called on PDP members to work assiduously for the success of the party ahead of the 2023 election.

The state party chairman, Hon. Chris Hassan, said the emergence of Caleb Mutfwang as flag bearer of the party has strengthened its acceptability towards wining all elections in 2023.

He said the party has embark on reconciliation with all those who contested the party’s primaries and lost with a view to go into the election as a united front.

Chairman of Mangu Traditional Council, the Mishkaham Mwaghavul, Da John Putmang described the reception accorded to Mutfwang and the PDP stakeholders as a sign of good thing to come in 2023.

He expressed gratitude to Plateau people, particularly the PDP for trusting their son, Caleb Mutfwang with the PDP ticket to lead the party for the 2023 Governorship election.

Da. Putmang admonished the party to run issue based campaign, devoid of campaign of calumny, bitterness, rancour and uncultured behaviour to attract more followers, who will vote the party to power.

He said Plateau people will endorsed the kind of change the state desire in 2023 and urged Mutfwang to be forthright, honest and sincere in dealing with all sections of the state.

President Mwaghavul Development Association (MDA), Sir Joseph Gwankat expressed joy that the PDP picked Caleb Mutfwang as their candidate and urged him to run an all inclusive governance by carrying everyone along if voted into power in 2023.

Qua’an-Pan Council Boss, Hon. Ernest Da’a Sues for Peace at the Inauguration of the Fityanul Islam Of Nigeria Executives