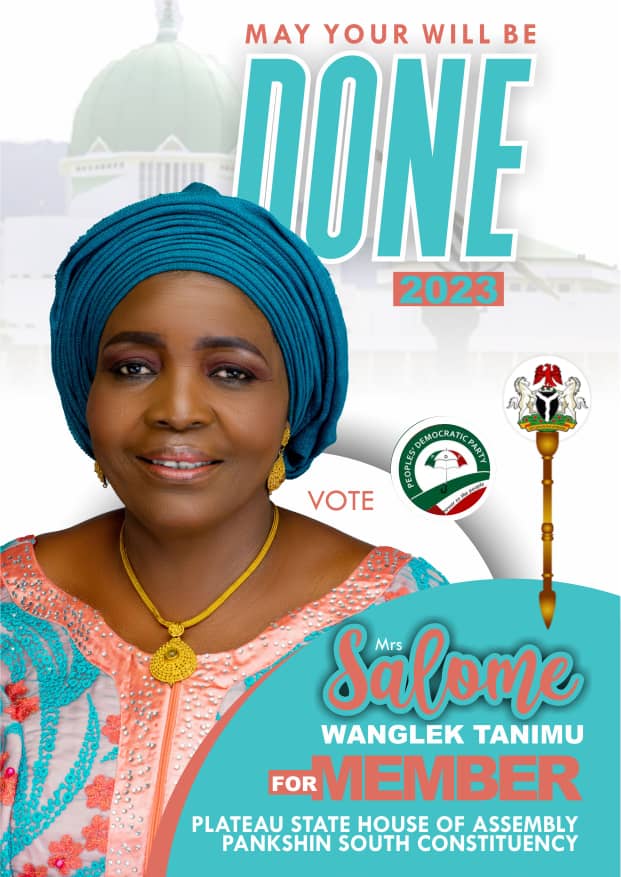 The flag bearer of the People’s Democratic Party (PDP) for Pankshin South Constituency was on Tuesday 30th August, 2022 at White House Chip to attend the meeting of Pankshin South PDP Forum. She had looked forward to a moment like this when the leadership of the Forum would call for such meeting as she sought for an opportunity to reach out to all members of the party within the constituency to show them her appreciation for being bestowed the mandate of flying its flag in the forthcoming general elections as member Plateau State House of Assembly representing the good people of Pankshin South Constituency. And as God would make it according to His will and grand design, the leadership of the Forum graciously called for the meeting which saw party faithfuls come out in their numbers from all nooks and crannies of Pankshin South to attend.

While addressing the gathering, Mama Salome started by apologizing that such appreciation would have come earlier than now because the primaries were since held in the month of May. She noted that every phenomenon is controlled by God, hence, in her words, “it is God’s will that the constituency meeting holds today”.

Her appreciation message was delivered in Hausa for the understanding of every member in attendance; excerpts thus: “First and foremost, we appreciate God Almighty for His will upon our lives. We appreciate all of you our parents, stakeholders, youths, women and the elderly. I sincerely appreciate all of you beyond measures because of the love you showed me. I want to assure you that this love you have shown is not because of me as a person but because of our great party, the PDP and our great Constituency, Pankshin South. I appreciate you for allowing God to use you to chose someone from Dokpai to hoist the flag of the party in this dispensation. This honour done to me is not something that money can buy.”

In her usual nature as a very humble, loving and caring mother, she noted that she will never leave behind those she contested the primaries with as she will need them to succeed with the campaigns, the general election and in discharging the functions of the office when she eventually emerges the winner in 2023. She sued for their understanding, emphasizing that she is open to corrections, advice and guidance where necessary.