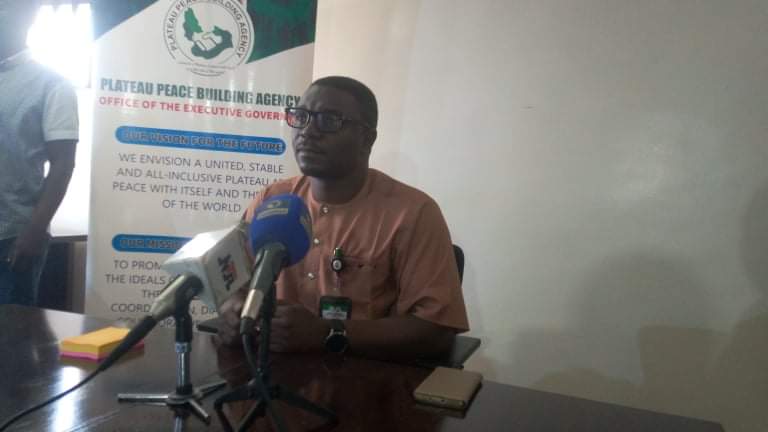 As the Nation continue to put in place measures to combat the numerous security problems confronting it, the Director General of the Plateau State Peace Building Agency (PPBA), Mr. Joseph Lengmang has disclosed that insecurity potent great challenge to humanity and development.

He stressed the need for genuine reconciliation and forgiveness if lasting peace is to be attained in the State as against the backdrop of mutual suspicion and distrust among the people owing to the experiences of conflict violence.

He said government through the agency is putting measures on ground to ensure that stakeholders are reached in the peace building process in order to give them a sense of belonging and make them take ownership of the peace project in the State.

Mr. Lengmang made the disclosures during a parley he had with Journalists at the Corporate Headquarters of the Agency at Liberty Boulevard Jos, Plateau State.

He commended the collaborative efforts of the Media in promoting peace, reconciliation; countering negative narratives and combatting hate as well as dangerous speeches which have been a clog in the wheel of the peace building process. He said the Media has provided the platform for the agency to be able to reach out to stakeholders in the Plateau State Peace building process.

He further added that the citizens have critical roles to play in conflict prevention and peace building landscape in Plateau State.

He said the agency will continue to have the periodic interface to explore wide range of issues on how the Media and the Agency can synergy to strengthen their resolve towards peace building.

He hinted that the media has evolved over the years and have continued to play key role in the peace being achieved.

He hinted that those who in the past were fanning the ember of ethno-religious crisis, religiosity and ethnicity have today been transformed to Ambassadors of Peace on account of the trainings, engagements and exposure they have gathered over the years which has led to significant progress being recorded by the agency in terms of its mandate.

He charged the media to always interrogate the issues that are still troubling the State with open mind.

“Peace is everyone’s business and if we don’t come together as a people to unite with unity of purpose to confront our most outstanding challenges as far as peace and security is concerned, we all stand the risk of being consumed in this growing inferno that we are seeing not just in some parts of the State but even across the Country”

“While we have made some modest achievements, on the other hand there are emerging challenges that are threatening to undo or undermine the relative peace that we have achieved over the years” he posited.

He disclosed that insecurity in all forms constitute a fundamental challenge to the existence of the people in the State and National at large which call for serious measures to curb the monstrous trend.

2021 Int’l Day of Persons With Disability: Rep. Mwadkwon Drums Support for PLWD, Frowns at Discrimination Against them