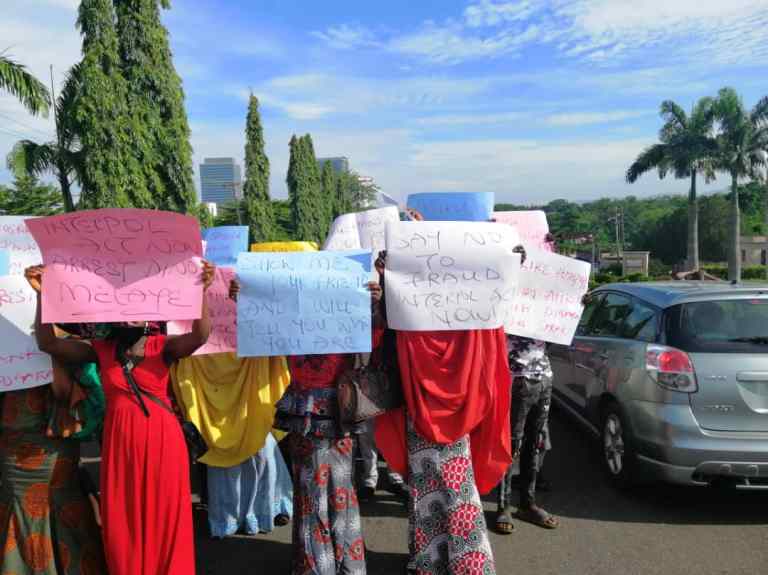 The group, under the aegis of Concerned Citizens Forum (CCF), numbering over 500 persons submitted a letter to the US Ambassador and the Federal Bureau of Investigation, urging a thorough probe of Hushpuppi’s political allies who are all in the PDP.

Recall that the All Progressives Congress (APC) had alleged “criminal conspiracy linking the top echelon of the opposition” to Hushpuppi.

According to the APC, ” the PDP leadership turned Dubai into their ‘Strategic’ meeting place ahead of the 2019 general elections

In its petition signed by Comrade Adamu Kabir Matazu, the peaceful protesters called on the US, through relevant agencies, to investigate the connection between these high profile Nigerians and Hushpuppi so as to recover fully the proceeds of crime or make it difficult for such monies to be laundered in Nigeria.

The group reasoned that Atiku’s frequent reliance on cyber experts and reference to internet server and frequent trips to Dubai prior to last year’s elections may not be unconnected to Hushpuppi.

It, therefore, urged the US to go after Atiku, Timi Frank and other PDP stalwarts who through their actions and associations with the fraudster may have helped to launder the proceeds of crime.

The statement reads: “Permit us to congratulate you on your appointment as the United States ambassador to Nigeria by US President, Donald Trump, and for the successful presentation of your credentials to Nigeria’s President, Muhammadu Buhari in December, 2019.

We are a group of eminent Nigerians with keen interest in building a positive image for our country through the promotion of credible best practices and exposure of acts capable of soiling the image of Nigeria.

In the light of the fact that we share common ideals of accountability and good citizenship, we wish to bring to your attention, certain facts that will further build citizens’ capacity for best practices.

Dear Ambassador, we are sure you are aware that within the period you arrived Nigeria and shortly before that, some of our citizens have been arrested for alleged criminal activities like cyber crime, internet fraud and money laundering in many countries in Europe, Asia and America including your country, the United States.

The biggest and most recent of such, is the arrest of Mr. Raymond Abbas Igbalode, the Instagram celebrity, also known as Hushpuppi and 12 others who are alleged to have scammed over 1.9 million people across the globe of over $35 million.

We commend the international community for the vigilance which has led to the arrest of these persons whose activities have deprived many of their legitimate sources of livelihood and brought shame to Nigeria.

Dear Ambassador, following the extradition of Hushpuppi and his associates to the US to undergo trial for alleged cyber fraud, we wish to offer our suggestions on how the investigations would be thorough to achieve the goal of exposing all those suspected to have either aided the fraud or those who have through their actions and associations with the fraudsters, helped to launder the proceeds of crime.

This, we believe would ensure that all those involved in the crime are brought to book so as to serve as a deterrent to others.

You will agree with us, dear Ambassador, that all the global instruments on financial crime including FATF, clearly identity several ways in which proceeds from financial crimes can be whitewashed and presented as legit.

Some of these processes include association with politically exposed persons, channeling the resources through existing organisations and partnering with already established businesses.

We wish to inform you that since 2016 when Mr. Igbalode pulled his first heist and leaped into living a luxurious life of opulence, his major channel for laundering the proceeds of his crime have been through open association with notable Nigerian politicians as well as former and serving public officials.

Such meetings are usually presented to the public through videos and other photos of the event which are usually held in posh hotels or other expensive venues around the world on Instagram and other online media.

The aim of such videos and photos, Dear Ambassador, as you are aware, is to further scam the public by presenting such fraudsters and their ill-gotten wealth as clean business men with legit income that anybody can do business with.

The photo and video shoots from such events serve as open endorsements of such characters, making it easy for the proceeds of these cyber fraud to be brought into Nigeria and to be accepted by unsuspecting members of the public as normal which further makes it difficult for investigating agencies to track.

We wish to report you, dear Ambassador, that some of the persons who have lent their high profile personalities to cover up for such shady transactions include a former vice president of Nigeria, Alhaji Atiku Abubakar, a former senator, Dino Melaye, and a top member of the opposition Peoples Democratic Party, PDP, Mr. Timi Frank and others.

Videos clips of their association with Mr. Igbalode have been posted and reposted on major internet outlets like Facebook, Internet and YouTube for all to see.

We have every reason to suspect that their open association with Mr. Igbalode (Hushpuppi), was not a coincidence as they are trying to make people believe, but was well planned to sell the fraudster to Nigerians as a legitimate businessman who associates with respected and eminent members of the society.

It is in the light of this, dear Ambassador, that we urge you, to use your good office as the representative of the United States Government in Nigeria, to call the attention of the US government of the possibility that the major accomplices of Mr. Igbalode are still roaming about freely in Nigeria.

We call on the US Government to in the bid to help fight cyber crime, money laundering and possible terrorists financing, to draw the attention of the Director of the Federal Bureau of Investigation, FBI, Mr. Christopher A. Wray and the Secretary General of Interpol, Mr. Jürgen Stock to these facts.

We are aware that both the FBI and Interpol have range of legal authorities that enables them investigate federal crimes and threats to national security, as well as to gather intelligence and assist other law enforcement agencies in countries outside the US.

Hushpuppi is known to have defrauded millions of people across the world and is wanted for fraud crimes in Europe, the United States and Nigeria.

We are aware that Title 28, U.S. Code, Section 533, authorizes the Attorney General of the US, to appoint officials to detect and prosecute crimes against the United States.

The investigation we are asking these agencies to carry out are clearly crimes against the United States as well as other countries and we are aware that the FBI, unlike many domestic intelligence agencies around the world, can investigate crime in other countries, more so as the investigative jurisdiction of the FBI extends to most federal criminal laws in more than 200 areas, including computer crime (cybercrime), embezzlement, money laundering, organized crime (including extortion and racketeering), piracy and hijacking, sabotage, sedition, terrorism (including ecoterrorism).

We are also aware that these agencies have helped in tracking down crimes in other countries.

We also know that the FBI has in the past worked with The Economic and Financial Crimes Commission in Nigeria, to identify and prosecute local partners of international fraudsters and had arrested 281 individuals, including 167 in Nigeria, for their involvement in fraudulent business email compromise (BEC) schemes.

Dear Ambassador you may wish to know that the EFCC in Nigeria, has said that details of Mr. Igbalode’s money laundering transactions involves many high-profile cyber criminals facing trial in Nigeria.

We are happy that EFCC is also eager to engage with the EFCC in tracking victims of Mr. Igbalode’s fraudulent transactions and other fraudsters having direct involvement with him.

We are interested in having these persons investigated because we believe they may have aided in laundering the proceeds of crime by Mr. Igbalode either directly or indirectly, which if established, makes them accomplices in the crime.

Our suspicion is heightened by the frequent visits of these persons to Dubai in the United Arab Emirate, UAE, where Mr. Igbalode was arrested, at the slightest instance, one of which was the celebrated meeting of the associates of the former vice president shortly before the 2019 Nigeria general elections.

Again, we have every reason to suspect that the frequent reliance on cyber experts and reference to internet server by the former vice president and his associates, may not be unconnected with their relationship with these cyber criminals.

We therefore call on the US Government to assist through the relevant agencies to investigate the connection between these high profile Nigerians and the internet fraudster so as to recover fully the proceeds of crime or make it difficult for such monies to be laundered in Nigeria.