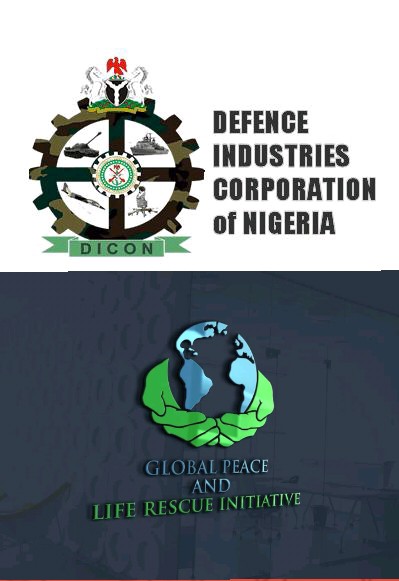 Hails Buhari, Buratai on appointment of General Ezugwu as DG

The Global Peace and Life Rescue Initiative, GOPRI has applauded President Muhammad Buhari and the Chief of Army Staff,Lt. General Tukur Buratai on the revival of the Defence Industries Cooperation, DICON, Kaduna,saying the development has strengthened the capacity of the Nigerian Military in tackling insecurity in the country.

GOPRI,a civil society organization with interest in peace building across the country, said it was particularly elated with the appointment of Major General Victor Okodili Ezugwu as the Director of the organisation, given his tract records in management.

The organisation’s Executive Director, Amb Melvin Ejeh, answering questions from newsmen following on-the-spot assessment of activities at DICON,insisted that with the revival of the military formation, security agencies can effectively tackle insecurity now.

While noting that the military formation situated in Kaduna was capable of providing the nation’s much needed hardwares in prosecuting insurgency and other forms of insecurity challenges in the country,he appealed to both President Buhari and General Buratai for adequate funding so that it can live up to its full responsibilities.

We in GOPRI have strongly commended President Muhammadu Buhari and the Chief of Army Staff, Lt. General Tukur Buratai for reviving the Defense Industries Cooperation,Kaduna from its former moribund state,”Ejeh said,adding that “it is one of the best of Defense industries in Africa today within a short period under the Command of Gen Ezugwu.”

Amb. Ejeh ,speaking on how best the country can tackle insurgency and banditry, insisted that with adequate funding of DICON,Nigeria would easily solve its insecurity problems.

According to him,the formation provided the various arms of the nation’s military and the other security agencies to synergize with a view to tackling the insecurity bedeviling the country.

If massively funded ,according to him, DICON can provide the military and other security hardware sufficiency.

“With what we saw at DICON, during our appraisal of some keys organisations in Nigeria, and the testimonies of several other agencies and persons that have visited the industry. if given more funding, the industry will supply all the military hardware needed to fight insurgency, banditry and other forms of criminalities in the country besides supplying other countries of the world security hardwares,” he said.

According to him,”The transformation going on in Dicon in just one year reign of the DG,Major General Ezugwu and his team is unimaginable.”

“We were shocked with all the mind- bugling equipments, hardware, arms, ammunition’s, balistic items and combat vehicles that are being produced there,” he said,adding:”I must say that this is one of the best successes President Buhari and the Chief of Army Staff have recorded. “

” We are proud of President Buhari, the Chief of Army staff, General TY Buratai and the Director General of DICON,who has been driving the vision of the CInC and COAS.

“If our industry can produced all these items then, there’s no need for the so much capital flight.

“As a group, we wish to passionately appeal to the Chief of Army Staff’s,development partners to use their good offices to sustain and increase the funding of the industry to enable massive production for self sufficiency,” Ejeh stressed.