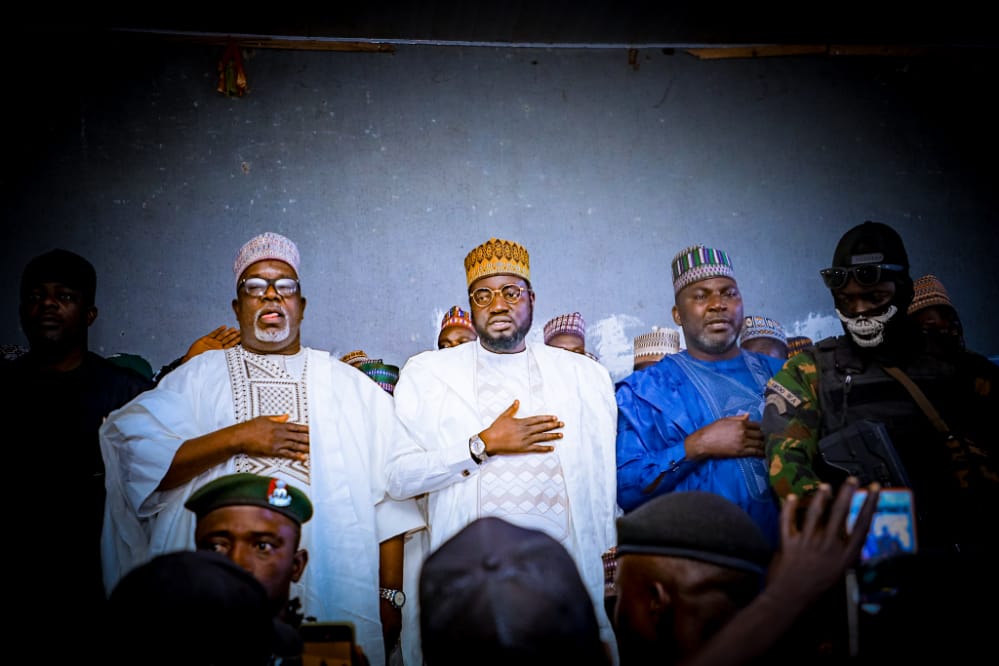 It seems the rift as perceived by political pundits between Rt. Hon Gagdi and the Deputy Speaker, Rt. Hon Yipmong is now over. This revelation is coming at the background of a public reconciliation and town hall meeting held at Kanam.

The meeting consisted of Stakeholders of the All Progressives Congress, APC in Kanam Local Government Area

The meeting have unanimously resolved to consolidate on the status of the area being one of the strongest holds of the party in Plateau State.

This was the view that emanated at the well attended and enlarged meeting which brought together all elected and appointed sons and daughters of the area, party executives and Kanam citizens from across the twenty electoral wards of the area.

The occasion, held at the popular Dengi Multipurpose Hall, drew a mammoth crowd which was filled to capacity.

Welcoming the crowd of APC faithful, Kanam Local Government Council Chairman Dr. Dayyabu Yusuf Garga said the coming together became necessary in order to further solidify the strength of the party in the area as well as rub minds as part of preparations for active political participation with the lifting of the ban on campaigns by INEC around the corner.

He said apart from the APC, no political party exists in the area as could be seen by the array of personalities who were in the hall as there was no person of political value that was left out.

Garga equally said the people of Kanam have great love for the APC with their turnout and resolve to deliver the party one hundred percent in the 2023 general elections.

Deputy Speaker of the Plateau State House of Assembly, Rt Hon Saleh Shehu Yipmong on his part, said they will work as a team to deliver all candidates of the party even as some of them who contested did not clinch their tickets, they are putting their heads with all the leaders of the party to ensure that Kanam remains the pride of the APC.

Adding his voice at the interactive meeting, member representing Pankshin/Kanke/Kanam Federal Constituency in the National Assembly Abuja, Rt Hon Yusuf Adamu Gagdi visibly elated by the massive turnout of supporters of the APC said Kanam as bedrock of the party will continue to deliver en block and ensure all candidates from top to bottom are returned elected.

He added that as leaders, entrusted with such privilege, they will work towards giving back to the people absolutely what belongs to them.

Gagdi assured that the crowd of supporters in the hall was just a Sign of what is to come when campaigns eventually start by the end of this September saying they will comb the nooks and crannies of the local government and give candidates of the APC the complete votes of the Kanam people.

Earlier, Chairman of the APC in Plateau State, Hon Rufus Bature, represented by the state Treasurer of the party, Hon Myepobi Ishaku said the party holds Kanam LGA so dear because it has never disappointed when it comes to elections.

He commended the stakeholders of the APC in the area for constantly keeping in touch with the people and assured that they will continue to benefit from the party.

Other stakeholders who took turns to make comments at the event were Hon Commissioners for Agriculture as well as that of Physical Planning, Dr. Hosea Finangwai and Alhaji Idris Gambo respectively. Others were, member pepresenting Kantana State Constituency, Hon Bala Noma, former Chairman of Kanam LGC, Prof Saleh Mohammed Kanam, among others.

They all saluted the doggedness of Kanam people saying by their attendance, jitters must have been sent to the spine of anyone thinking of coming to Kanam to scout for votes other than the APC.

The people unanimously by voice votes agreed to return and also mop up the very few votes if there are remaining at the grassroots.

Speakers after speaker on the line reaffirmed their resolve to deliver the APC come 2023 and prayed for their leaders in the LGA.

A cross section of attendees included, former members of the Plateau State House of Assembly, former LGA Chairmen and their deputies, all elected councilors from the twenty wards, women leaders and groups, youth, persons with disabilities, market women, Youths and elderly.