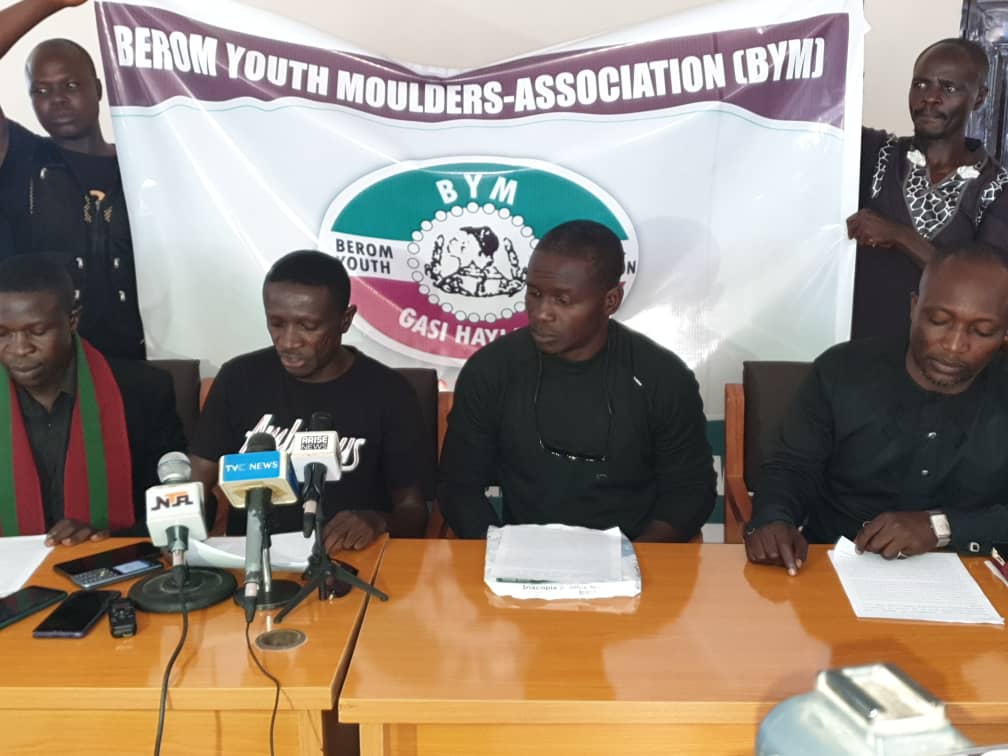 Berom Youth Moulders Association (BYM) in Plateau State has disclosed that over 68 villages and communities in Berom Land has been taken and occupied by Fulani Militia and over 11,000 persons including children and women killed from 2001 to date.

National President of the BYM Barr. Dalyop Solomon Mwantiri stated this during a Press Conference on Wednesday in Vom condemning the attack on internally displaced Persons at Rantis Resettlement, Barkin Ladi.

It would be recalled that on the 7th April, 2022 Fulani herdsmen attacked and killed internally displaced persons from Rantis community of Gashish at a project site while rebuilding their ancestral homes since they were displaced in 2015.

“It’s no longer news that over 68 villages and communities in Berom land have been sacked and are currently occupied by Fulani militias with no challenge whatsoever either from the Berom native owners or the government as well as security services in favour of Justice, equity and fairness”.

The Berom group expressed sadness over Federal Government failure to not redeemed the pledge of 10 Billion funds promised, saying also non establishment of the Mobile Police Squadron are tacit complacency over the continued degeneration of security situations in the areas concerned.

INTERNATIONAL PRESS CONFERENCE BY BEROM YOUTH MOULDERS-ASSOCIATION (BYM) ON THE ATTACK ON INTERNALLY DISPLACED PERSONS AT RANTIS RESETTLEMENT DATED APRIL 13, 2022 IN JOS.
Gentlemen of the Press, it has become imperative for us as an association to address the press today considering the ugly event that happened on Wednesday, April, 7th, 2022 when Internally Displaced Persons from Rantis Community in Gashish District of Barkin Ladi LGA were attacked at a project site where rebuilding work was going on to ensure they return to their ancestral homes after they were displace from the village sometime in 2015.
It’s no longer news that over 68 villages and communities in Berom land have been sacked and are currently occupied by Fulani militias with no challenge whatsoever either from the Berom native owners or the Government as well as security services in favour of justice, equity and fairness.
The plight of Displaced Persons in this general area is yet to receive any meaningful attention in terms of relief, rehabilitation and return from any quotas or authority in the land except the usual infamous slogans, “Government is on top of the situation, and is assuring all citizens to go about their normal/lawful business without any fear or intimidation.”
Another of such slogans usually on air after and attack and killing is that, “the perpetrators of the dastardly act shall be fished out and brought to book.” One wonders how large the so-called book is, taking into account the number of killings and avoidable destructions that have been experienced in Plateau State for one. If the said slogans were to be true expressions of commitment on the part of Government and security agents, the issue of attacks and killings by the Fulani militias and other terrorist networks would have long been addressed adequately.
In fact, the plight of the Internally Displaced Persons has been reduced to verbal condemnation of attacks and killings, verbal assurances of justice, verbal promises of assistance which, to us, amount to mere lips service and indeed, mockery of the victims. The unbelievable reality is that these empty slogans are shamelessly repeated on air when attacks and killings are perpetrated.
Gentlemen of the Press, it’s already an established fact that in broad daylight, Nigerians are witnesses to massive land grab and massacres by the Fulani militia and other terrorist networks in Berom land and indeed, other parts of Plateau State with no attendant consequences from constituted authority and security agents to either forestall, apprehend or deter the perpetrators. Unfortunately, this is now the price that the Berom and other hospitable, accommodating and peace loving natives have been forced to pay for hosting the Fulani. In our view, the justification for the flagrant abuse, utter disregard and violation of the Fundamental Human Rights of the natives in the face of a weak and oscillating public opinion has to be sought within the parameters of a wider Fulani jihadis agenda in Nigeria.
Our understanding of the onslaughts on innocent civilians and unsuspecting Berom natives is that our lands are earmarked for Fulani forceful occupation, subjugation and subsequent annexation. The Fulani strategy is that of terrorism while the tactics is occupation and guerilla warfare with impunity in this 21st Century!
Furthermore, we want Nigerians and the world to know that Internally Displaced natives in Plateau State have not only been neglected to their fate, but are today effectively been sabotaged, so they forfeit rebuilding their homesteads thereby surrendering to the occupiers of their lands. To our knowledge, so many have been killed, maimed and injured while making self-efforts at rebuilding their homes and livelihoods. It’s not surprising that IDPs are suffering their fate without assistance and support while Fulani militias are drawing from the strength and sponsorship of terrorist networks, funding and unfettered supply of arms and ammunitions.
In this light, the following cases readily come mind:-