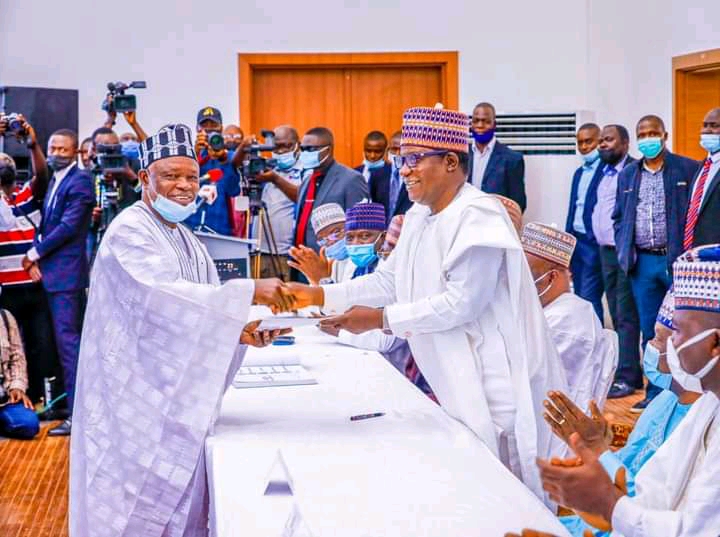 Da Jock Alamba, the immediate past Management Committee Chairman of Barkin Ladi Local Government Council has been sworn in as Executive Chairman of the Area by the Executive Governor of Plateau State.

While swearing in the newly elected Chairmen, Governor Simon Lalong Governor Lalong said the elections were conducted peacefully without any incident throughout the State. He said “I use this opportunity to commend the people of Plateau State for their exemplary conduct, resilience and patriotism throughout the exercise. I also congratulate the Plateau Independent Electoral Commission (PLASIEC) for conducting one of the best elections in the history of the State adjudged to be free, fair and credible. Despite the legal fireworks that persisted up to few hours before the polls, they were able to carry out their constitutional mandate according to law”.

Lalong said without doubt, this is a very significant achievement in the democratic journey and the efforts to build a Plateau that is inclusive, egalitarian and progressive.
Lalong charged the elected Local Government Chairmen to see their victory as a call to service and an opportunity to serve the people.

“From today, you have ceased to be leaders of your parties, religious or ethnic groups only. You are to work for all citizens including those who did not vote for you. Furthermore, your victory is for the people and not an opportunity to settle scores with anybody or enrich yourselves” he said.

On revenue generation and project implementation,  Lalong said “In developing your blueprints, you must think outside the box and explore other sources of revenue generation that will enable you carry out people-oriented projects. You must key into the new joint revenue drive between the State and Local Governments which commenced last year in order to ensure that we tap from revenue sources that have been neglected over the years”.

He also asked them to take advantage of the full Autonomy currently being enjoyed by the Local Government System in Plateau State to do more for their people by embracing prudence, accountability and according priority to the programmes and projects that have direct bearing on the lives of the people.

While addressing the people who welcomed him to the office with a special prayers, Hon. Jock Alamba described his victory as an act of God and appreciated the electorates for the support and hinted that they will justify the trust and confidence reposed on them with exceptional performance.
He called for support from the management and staff of the Council as well as the Legislative in order to achieve a more peaceful, safer, secured and prosperous Barkin Ladi LGA.
He said he will run an all-inclusive government and develop the area.

A special prayer was offered by the leadership of the Christian Association of Nigeria (CAN) and Jama’atu Nasir Islam (JNI) to usher the Executive Chairman to the office.