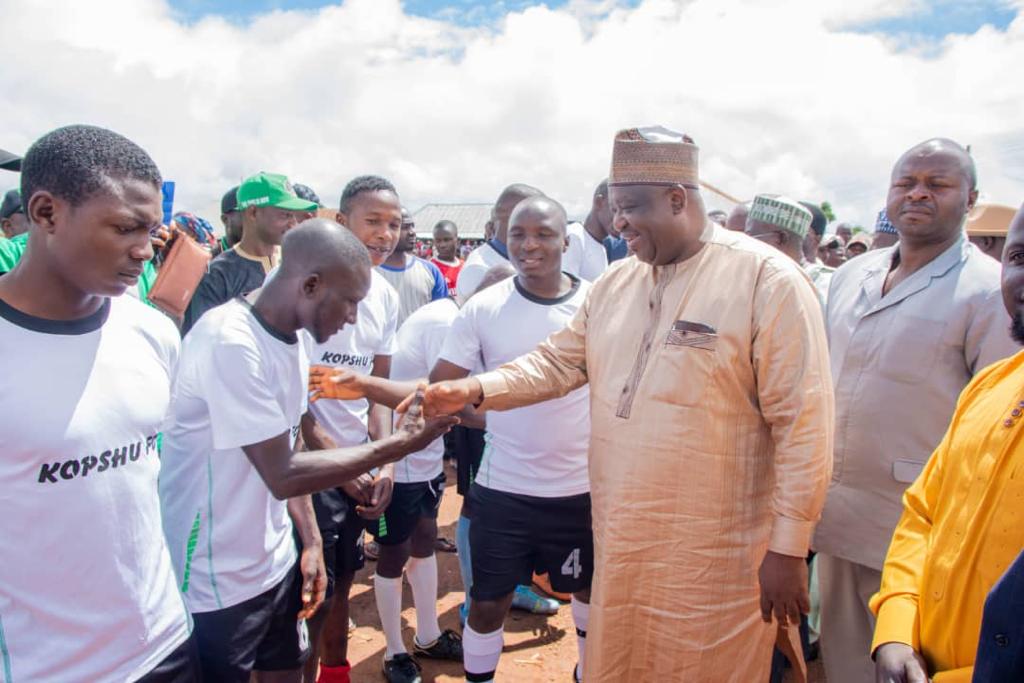 The governorship candidate of the People’s Democratic Party (PDP) in Plateau State, Barrister Caleb Mutfwang (BCM) was in Ampang West District of Mangu Local Government Area of the state on Sunday 11th September, 2022 to witness the finals of the football tournament organized in his honour by a youth support group “BCM Sports”.

A statement made available to newsman to this effect by the media team of Barrister Caleb Mutfwang reads thus:

Ampang West District of Mangu Local Government Area (LGA), Plateau State, was a beehive of activities on Sunday when the final of a football tournament in honour of Barr. Caleb Mutfwang (BCM), the People’s Democratic Party (PDP), gubernatorial standard bearer of the State took place.

The tournament, christened “BCM Thank-You Tournament”, was organized by a self-sponsored youth support group known as “BCM Sports Group”, whose sole aim is to boost the electoral fortunes of the gubernatorial candidate in the forthcoming General Elections in 2023, through sports.

Leader of the group, Kuden Plangkat Istifanus, applauded PDP, for finding a notable son of their community worthy of leading Plateau State to what he described as a brighter future. It was for that reason he stressed, that they decided to organize the tournament.

Twenty three (23) teams slogged it out in the tournament that lasted six (6) weeks.

Acknowledging the honour accorded him, Barr. Caleb Mutfwang praised the vision of the organizers and prayed God to bless them for putting the tournament together.

As a morale boost, the governorship candidate further stated that his roadmap for governance gives great priority to youth empowerment and sports development. He also revealed that sports is a cardinal tool he intends to use to bring about positive engagements among young people, from 2023 and beyond. That he opined, will help reduce social vices and youth restiveness in the State.

The final match was between Spartan FC vs Kopshu United. Kopshu United won 5-4 on penalties after a goalless draw, to be crowned champions of the inaugural edition of the BCM Thank-You Tournament.

All 23 participating teams were each presented with complete sets of jerseys and other prizes at the end of the football tournament.