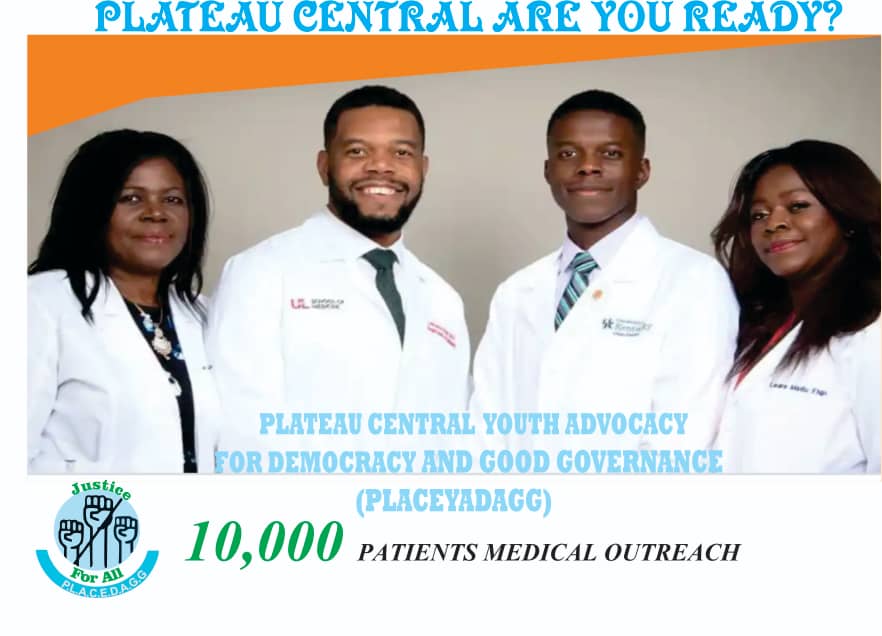 The group, Plateau Central Youths Advocacy for Democracy and Good Governance (PLACEYADAGG) has announced its free medical outreach across the five (5) LGAs that constitute the Plateau Central District. These include Bokkos, Mangu, Pankshin, Kanke and Kanam.

As part of its vision, the youth advocacy group has continued to identify with effective and efficient representation while holding public service holders accountable for their actions and inactions in meeting up with the demands and expectations of the people.

Consequently, this initiative is borne out of the group’s absolute commitment to its corporate social responsibility of giving back to the society, honed by its passion to ameliorate the plight of the masses who are financially unable to access good medical services. Statistics has shown that the target population in the district is quite large and in dire need of such aid.

Thus, while calling on interested patients to avail themselves for the free treatment, the group also enjoins traditional and religious rulers, youth and women groups, as well as other patriotic individuals within the five districts to partner with it through publicity, mobilization and security to ensure that the outreach is a success. Together, we can make our world a better place!