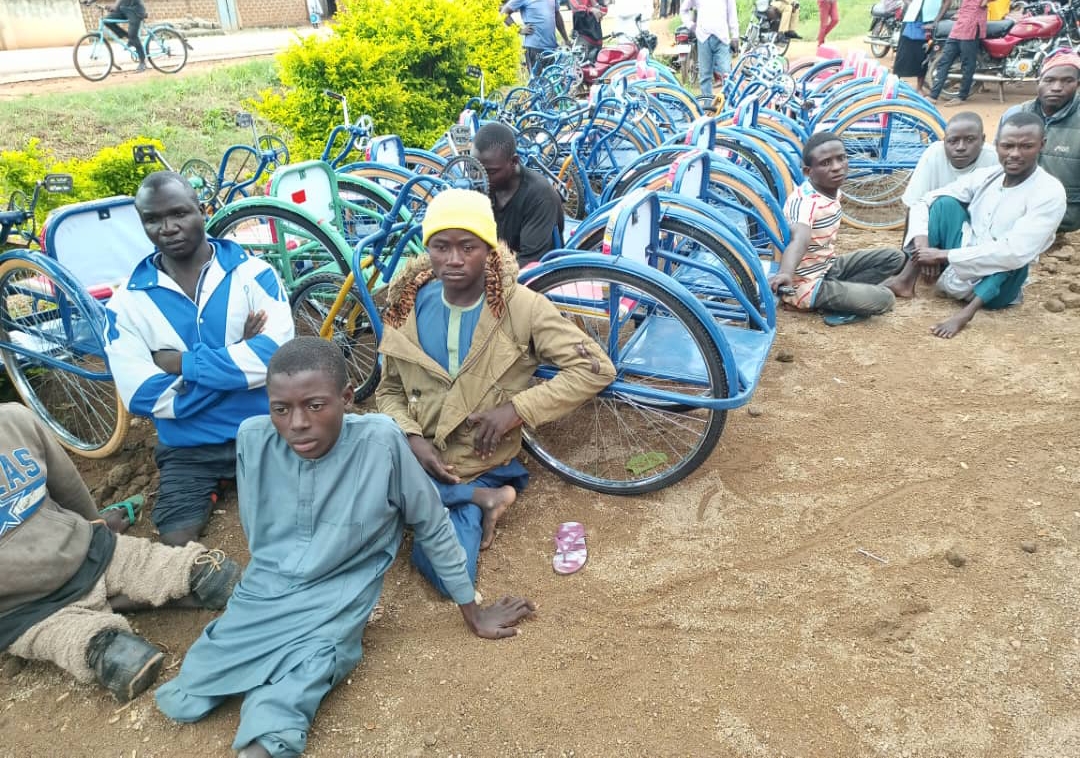 In furtherance of the desire to continue to reach out to people with special needs in the society, the Beautiful Gate Handicap Peoples Center has once again reached out to seventy (70) beneficiaries to help aide their mobility in Kaduna

Speaking at the event organized by the Polio Victims Care Initiative in Garun Kurama, Lere LGA, Kaduna State, Chief Executive Office of the Beautiful Gate Handicap Peoples Center, Jos, Chief Ayuba Burki Gwafan, on behalf of the Board of Trustees of Center expressed gratitude to God for the opportunity to visit Guran Kurama again. He noted that it was the third time Beautiful Gate Handicap Peoples Center was visiting the community to reach out to people with special needs.

He added that the provision of wheelchairs is an intervention in order to help beneficiaries fulfill their dreams and aspirations in life, be it business, education, employment etc, and also to help them become self sufficient in order to support themselves and their families. He pointed out the need for beneficiaries who will receive the wheelchairs to use them in such a way that they become helpful to others and not subjugate them.

In his own words “As it has been said that disability is not the kiss of death, your attitude towards such disability is what matters.” He added that “There is need for you never to allow your disability to become a stumbling block to your quest to achieve your ambition. A person’s disability is said to be overpowered when such a disability is no longer an excuse for abandoning the pursuit of life’s ambitions.”

He narrated that he was only five years old when he became a victim of polio. He said that mobility, especially to school became a huge challenge because it required traveling for kilometers daily. He said he was able to overcome that challenge when he was given a wheelchair which aided his mobility to school and back, and today he has made something out of his life because he continued to push until he became great.

He advised beneficiaries to take advantage of any opportunity to acquire education or a skill in order to be able them become self sufficient and economically stable, in order to become a voice, advocating for the rights of other persons living with special needs in the society.

According to him, he has traveled the entire country in order to provide for those with special needs, adding that while there are agitations that able people usually divert what is meant for people living with special needs, people with special need should also approach equity with clean hands by assisting others whenever they have the opportunity, especially when the opportunity to receive wheelchairs from other sources, they should give out the additional wheelchairs to those in need rather than sells them off.

Chief Ayuba Burki Gwufan was accompanied by Roop Chopra, a British-Indian missionary on a mission to learn how to cater to people living with disabilities. Speaking at the event, Roop Chopra expressed gratitude to God for the opportunity to meet with the beneficiaries and to witness the distribution of seventy (70) wheelchairs.

He thank Chief Ayuba Burki Gwufan, his team, journalists and the host of the event Mr Zachariah Garba Gwanyo of the Polio Victims Care Initiative for sacrificing their time to be part of the event.

He commended the Beautiful Gate Handicap Peoples Center which was set up over twenty years ago in order to reach out to people living with special needs. He thanked the Chief Executive Officer of the Beautiful Gate Handicap Peoples Center for his relentless efforts in supporting persons with special needs. He commended the energies and efforts of the staff of the center in seeing that they bring succor to people living with special needs, while also praying that the wheelchairs provided will bring succor to the beneficiaries.

He pointed out that there is a disability that is greater than the disabilities mentioned earlier, adding that despite his Hindu religious background, the Bible has changed his life. He prayed for all present, both Christians and Muslims that God will make up for whatever shortcoming in any area of their lives; those who become depressed and angry as a result of their disability that they find solace.

He revealed that for twenty years of his life, he never read the bible, though he had an elder brother who always read the bible. He added that he was always having misunderstandings with his brother, coming from a large family, the last born of sixteen siblings. He noted that his mother had wanted to abort him while she was pregnant with him, but she couldn’t communicate it to the doctors at the hospital because of the Indian culture frowned at abortion.

Roop said that the most beautiful gate in the entire world was a person. He added that a person can be one of two persons; one who helps people or one who hurts people. He asked about the relationship those present with their family, friends and neighbors. He asked also if there was peace in their homes and if the basis of their peace was linked to material things.

He prayed that God would work in the lives of everyone hearing his voice, that the bible is a mirror like the mirror used daily in their homes. He thanked God for bringing everyone to the event, while looking forward to seeing the people again when the opportunity avails.

Mr Zachariah Garba Gwanyo of the Polio Victims Care Initiative thanked Chief Ayuba Burki Gwufan amf Roop Chopra for coming to reach out to the beneficiaries. He charged the beneficiaries to make good use of the wheelchairs to make life easy for them and their families. The beneficiaries we so happy and were full of gratitude to the Beautiful Gate Handicap Peoples Center for their continuous show of love.