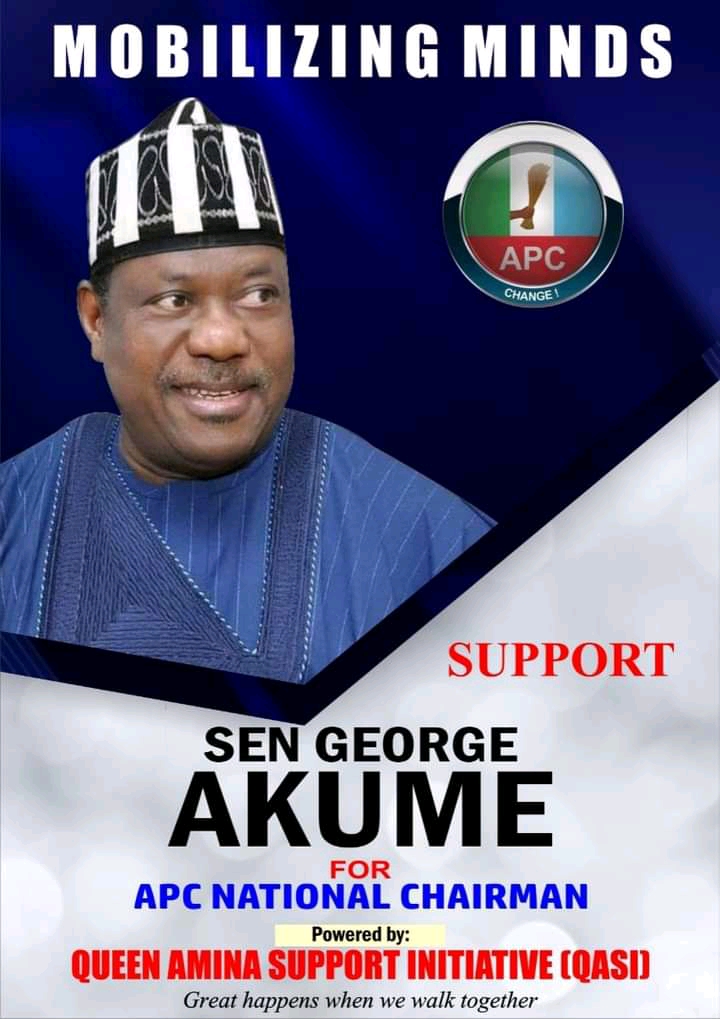 Queen Amina Support Initiative ( QASI ) on Thursday said it has commenced massive support and canvassing of votes for Senator George Akume, the current Minister of Special Duties and Inter-governmental Affairs Hon George Akume to lead the All Progressives Congress (APC) as National Chairman.

This was contained in a statement made available to newsmen in Abuja on Thursday .

The group expressed confidence that George Akume’s candidacy will be easy to sell to members of the party because , “he is a man of the people, a politician who knows his worth and friendly to everyone across the country.

The group said that Akume is the best man for the Job ,as he has all it takes to take the party forward .

,” Akume, who started his career as a civil servant a two term Governor of Benue State , a two term Senator and now Minister is the right candidate to lead the APC to its desired position of power.

Describing Akume as a child of destiny, the group said the Senator had been tested and trusted both at the grassroots and State levels to deliver the mandate of APC.

“We are calling on all APC card carrying members across the country to support George Akume ahead of the 2021 APC National Convention so that he will continue to bring more innovative ideas for the benefit of the party and Nigerians,” .

It could be recalled that the group had stormed the office of the current Minister of Special Duties and Inter-governmental Affairs Hon
George Akume , with a call on him to contest the office of the National Chairman of the All Progressive Congress APC about three weeks ago .

Our correspondent reports that QASI is founded on trust for the advancement of Nigeria “.

The group is made up of young Nigerians all across the breath of the country with leadership structure down to the ward level .

The chairman Board of Trustee of QASI Hon Chris Waya had then said the support group is willing to go the length and breadth of the country to ensure that Akume emerges as the National chairman of the party .

” We are here to identify with you, commend you for your stewardship in the service of our fatherland and also give our support and plead with you to consider offering yourself for leadership of the All Progressive Congress Chairmanship Position for our great country Nigeria .

“Our main focus is supporting the government through advocacy ,providing critical data on the activities of the government and helping it achieve it’s mandate , we also identify credible Nigerians with proven records administration to take up leadership roles , the leadership of the group are members of the APC Presidential Campaign Council during the 2019 Presidential Election and also members of Buhari Support Organisation the help win re election of President Muhammadu Buhari .

Waya had then said that “Akume’s whole life has been public service to the progress of humanity ,Your time in civil service was exemplary ,your leadership as the then Governor of Benue state is still a bench mark to measure people oriented leadership ,your time at the halo chambers was marked with credible laws ,because you are a special breed ,you are currently the Minister of Special Duties and inter government affairs .

“We have decided to prevail on Senator Akume to contest the chairmanship position and we will offer him our support at the national convention .”

Akume was a Senator of the Federal Republic of Nigeria and two time Governor as well .

Akims James Mamot: A dogged Young Politician with a difference in Plateau