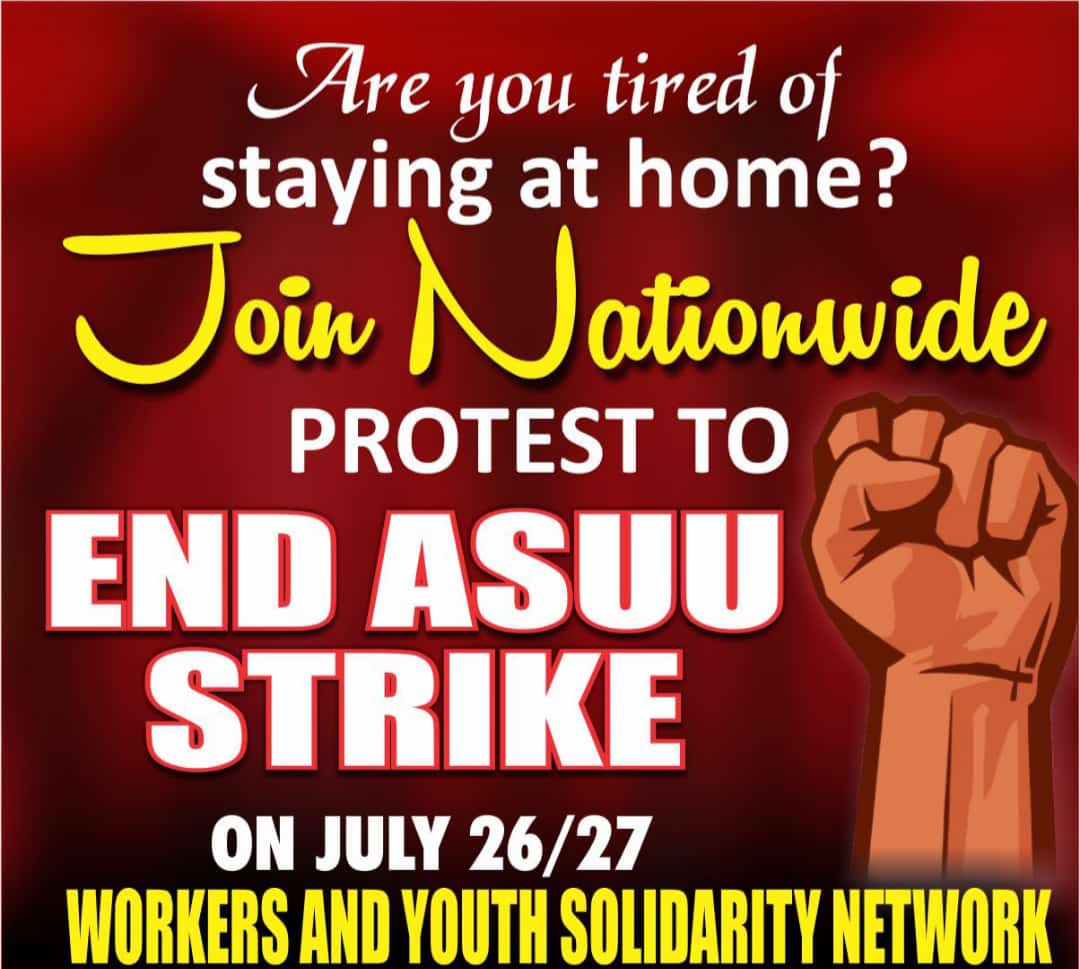 Mobilisation for the two-day nationwide protest by Nigeria Labour Congress, NLC, in solidarity with striking university workers, has reached feverish point as more critical industrial unions have keyed into the protest.

This came as NLC berated the Minister of Information, Lai Muhammed, for accusing it of planning to cause anarchy with the planned protest scheduled for Tuesday and Wednesday, saying the Minister is happy that while his children and those of others like him are graduating from universities outside Nigeria, children of the poor have been shut out of Nigeria universities for the past five months.

The unions in the nation’s university system, particularly the Academic Staff Union of Universities, ASUU, have been on strike for five months and above over unresolved issues with the Federal Government.

Non-Academic Staff Union of Educational and Associated Institutions, NASU, National Association of Academic Technologists, NAAT, and Senior Staff Association of Nigerian Universities, SSANU, have equally downed tools for over six months because of pending issues with the Federal Government.

NLC had, in a circular to its state councils and affiliates, dated July 15, 2022 and signed by its President and General Secretary, Ayuba Wabba and Emma Ugboaja respectively, announced Tuesday and Wednesday as protest days in solidarity with the striking university unions, in all state capitals and Abuja.

“In line with the decision of the National Executive Council, NEC, meeting of the Nigeria Labour Congress, NLC, held on the 30th of June 2022, we have scheduled as follows the National Days of Protest to get our children back to school and support our unions in Nigeria’s public universities fighting for quality education”, the circular said.

“Date: Tuesday, 26th July and Wednesday, 27th July 2022. Venue: All the state capitals of the Federation and Abuja, the Federal Capital Territory. Take off point: NLC state secretariats and the Labour House, Abuja.

“You are requested to immediately convene the meeting of your State Administrative Council, SAC, to disseminate this information and fully mobilise workers in the states for this very important protest for good governance.”

Speaking with Sunday Vanguard at the weekend on the level of preparation, Ugboaja said “Mobilisation for the protest has reached a feverish point. As we speak, all the affiliates of Congress have keyed in. All our 36 states councils and Abuja are super charged for the protest. Our civil society allies are also ready. The students that have been forced to stay at home because of the protracted strike are not left. In essence, we are more than ready for the protest.”

Ahead of the protest, critical sector unions have continued to sign in.

In a statement, President and General Secretary of NUCECFWW, Stephen Okoro and Ibrahim Walama, respectively said, “The protracted ASUU strike has been as a result of Federal Government care free attitude towards ASUU, NASU, SSANU demand for the welfare of working people in tertiary institutions and particularly Federal Universities”.

ASUU itself said at the weekend that it was mobilising members nationwide for the two-day solidarity rally.

Disclosing this in a chat with Sunday Vanguard, the National President of ASUU, Prof. Emmanuel Osodeke, said ASUU, as an affiliate of NLC, would mobilise its members for the Tuesday and Wednesday protest.

“We are in full support of the step that the NLC wants to take by organising a solidarity rally in support of our struggle. We are not agitating for ourselves but for improvement in the education sector generally. As an affiliate of the Congress, we are going to be part of the event and we will mobilise our members for it too.

“We keep saying it that the struggle should not be left for ASUU alone. Every right thinking citizen of this country should be part of it. Education is an important sector that should not left to the whims and caprices of those not bothered about what happens to it. A nation cannot develop more than its level of education. We hope the government would wake up to the reality of the time and accord the sector the needed attention and priority,” he said.

Recall that ASUU has been on strike since February 14 this year over some demands from the government.

The Federal Government later set up the Prof. Nimi Briggs-led committee to renegotiate the 2009 agreement endorsed by the union and the FG.

Government is saying that it cannot meet the financial obligations required to implement some aspects of the agreement, while ASUU is accusing the government of not according priority to education.

However, the report of the Briggs Committee has been jettisoned by government.

Meanwhile, reacting to the comments by the Minister of Information, Lai Muhammed, who accused NLC of planning to cause anarchy by the protest among others, Deputy President of NLC, and General Secretary of NUEE, Joe Ajaero, said: “Seeing civil protest as anarchy shows that Nigeria has brought its own lexicon on the definition of protest. Why had Lai Mohammed remained mute over five months that ASUU has been on strike? That makes you to know his priority and who he is in term of holding public office.

“For over five months, students have been at home, their parents are groaning and the minister and his likes feel that it is normal for their children to be graduating abroad while other people’s children are at home. Now that the people have decided to go to the streets for the president to hear that a greater percentage of the youths are at home and its attendant consequences, Lai Mohammed has descended to name calling, qualifying protest as anarchy.

“However, all the places where he had made speeches to reduce the impact of such protests, its impact had always been more successful. His talks are like a call for action that propels Nigerian masses to take more action because his voice is like a fuel that the masses, the students and the oppressed Nigerians don’t want to hear. So we normally respond to him by making our actions more successful.”

Separately, the founder of African Initiative for Transparency, Accountability and Responsible Leadership and former President of Petroleum and Natural Gas Senior Staff Association of Nigeria, PENGASSAN, Dr Brown Louis Ogbeifun, has given some tips on how to resolve the imbroglio.

Ogbeifun, who is also a former Deputy President-General, Trade Union Congress of Nigeria, TUC, as well as ex-Industrial Relations Manager, Nigerian National Petroleum Corporation, NNPC, said time has come to halt the ASUU strike. “We cannot expect these innocent students who have been locked out of the university system and denied their right to quality education to cultivate patriotic instincts. Why should they?”, he said.

“I am sad that a negotiation that took one of our most okay brains, Professor Festus Iyayi, is still lingering. Everything is wrong with the ongoing negotiation between the Federal Government and ASUU. No country’s educational system can develop the way of Nigeria. Never!

“In 2013, our entire university system was closed for six months. In 2022, they have been closed for six months and still counting. Can all the presidential candidates, please, approach ASUU and tell them how they intend to re-open our schools if they become President?”