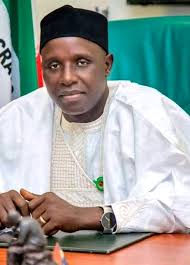 In pursuit of his people empowerment agenda, Senator I. D. Gyang has distributed Grinding and Sewing machines to 120 Women and other Constituents in Plateau North Senatorial District as a deliberate step to engage the women in meaningful and viable economic activity thereby expanding their capacity to generate household income.
Senator Gyang is full of praises for Women in Plateau North for being up and doing in seeking and even creating opportunities to earn a living and provide for their children and Household.
From stone crushing, street hawking, farming, trading in food stuff, vegetables to shop keeping, poultry and other Agri-business….!
Senator Gyang says Plateau North women are enterprising, resourceful and productive.

The Grinding and Sewing machines are meant to expand the scope of economic engagement of the womenfolk and the other beneficiaries thereby increasing their income generating capacity and participation in the local economy.

It is an established fact that if you Empower a woman, the whole family, community and nation will be greatly impacted.
Senator Gyang observed that BEING A WOMAN IS NOT BEING LESS HUMAN neither are women less human because of their feminity.

He boldly asserts that FEMINITY IS NOT INFERIORITY.
Consequently, the Senator says he shall sustain the empowerment of the womenfolk, youth and the people generally in keeping with his desire to turn around the misfortunes associated with the Plateau North in the past.
The beneficiaries were drawn from the six Local governments that make up Plateau North Senatorial District.

Ten Tricycles were also distributed across the six Local governments as a component of empowering the Constituency economically in the movement of persons, goods and services.
The occasion was low key in keeping with the Protocols of COVID-19.
Musa Ibrahim Ashoms
Special Assistant,
Media & Protocol to
Senator I.D Gyang, Esq.

One killed, five injured as soldiers clash with COVID-19 committee