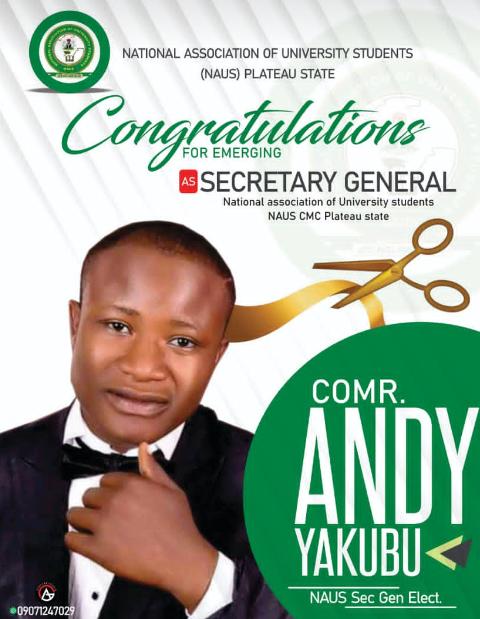 The secretary general of the National association of University Students, Plateau state chapter Comrade Andy Yakubu has congratulated the newly elected Vice-chancellor of the University of Jos, Professor Tanko Ishaya.

in a statement signed by Comrade Andy Ayuba said

“I comr Andy Yakubu,the newly secretary general Elect National association of University students NAUS CMC Plateau state,wish to congratulations our father, mentor and a teacher prof.Ishaya Tanko over his emerged as the new vice Chancellor University of jos.may God almighty give you the strengthen and wisdom to lead University of jos to the greater heights. In the same way,I also want to use this medium to plead with you, to suspend the plan hike and increment of hostels and accommodations in the interest of all University students on the Plateau, considered the current economy situation we are also facing in the country. I also want to let you know that, if this plan increment of hostels and accommodations go on, many of our University students mostly in the university of jos will suffer alot because, many of them are the ones who are sponsoring themselves in the school and some there parents are facing alot of challenges .

By doing so, you are adding alot of pains to already existing challenges they are facing in their academic, and they have no option than to engage in crime in order to met up with the current reality. I also want to please, advise the school management to always seek advice from the students leaderships before embarking on this task in order to prevent clashing among the students. Thank you for your understanding,and I hope our request and prayers will be given due consideration. Once more thank you. Aluta Viva